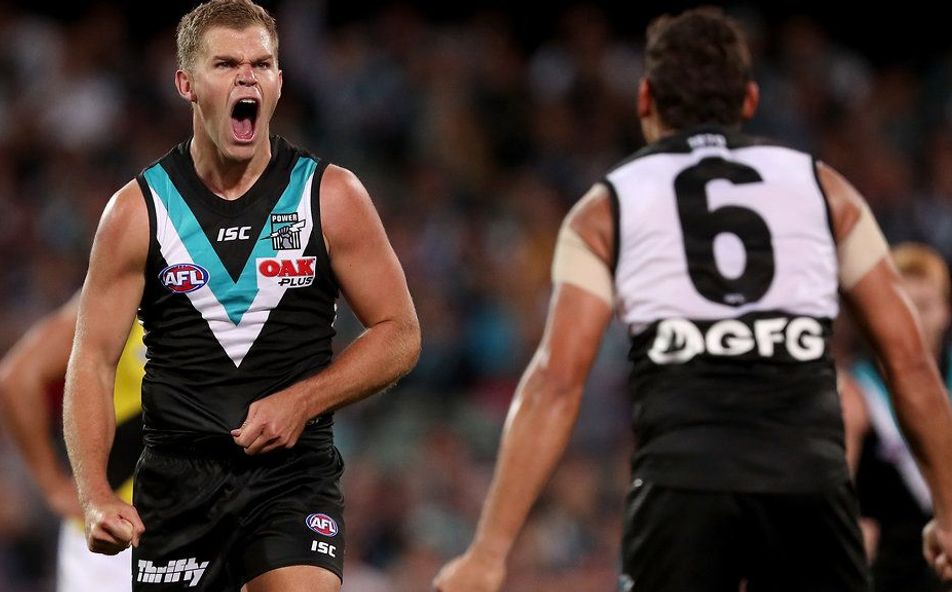 A fun 3 game Saturday slate for this week’s bye round, which means we a nice range of games to pick from when building our daily fantasy teams. As always there are massive daily fantasy contests on offer, so pick your poison:

Great conditions for football on the Gold Coast and down in Hobart, while Sydney is expected to get hit with a significant amount of rain all weekend. Timing of this wet weather is the afternoon and evening, which means right through game time. In the GWS vs Carlton game I would be looking at ruck options, while also loading up on inside contested beasts who rack up tackles.

Gold Coast have given up the second most points in the league to defenders this year and only 0.1 of point per game behind Collingwood for the top stop. Interestingly they give up the most points to the bottom scoring players as opposed to the top scorers, which means you can find value play in defense against them over playing premium priced players.

Gold Coast are the number one team to target on this slate through the midfield. They have been giving up 89 points per player this season and this mark has increased in the least five weeks to 95 per player. Targeting North Melbourne is always a solid option as well; however, down at Hobart I do not like it nearly as much. As we have seen this season North Melbourne are a much tougher team down in Tasmania than they are at any other ground in the Australia.

The Suns do not have an AFL level ruckman right now. Without Witts they had been patching things together with whoever they could find, but even now with Zak Smith back the results have not seen much improvement. They have given up 91 points per game to the oppositions number one ruck this season and this mark has increased to 97 per game over the last 5 rounds.

On a day without many obvious value plays these two for Brisbane stand out as options to in the $8k range with an opportunity to return 10x their price. Both should see around 50% of the Lions centre bounces based on recent history (and considering Dayne Zorko is out on suspension). Robertson has posted 4 straight games of 70+, while before being dropped Mathieson had a similar run of 3 straight games of 76+ (including 2 over 80).

Jacob Hopper (DS $12,700)… eek this one stings after loading him last week down at Hobart and watching him battle along to his lowest score of the season with a 52. At least the ownership will shake all the way out and, on this slate, as he faces off against Carlton in what should be very wet and slippery conditions. That will suit Hopper’s game style as contested ball and tackling will become a key skill set. As I said last week, he brings 120 point upside and before the shocker down under he had posted 4 tonnes in his previous 5 games.

Matthew Kennedy (DS $9,230) returns for just his third appearance all season and maybe his last chance in a Carlton uniform. Replacing Will Setterfield who attended a large portion of the Blues centre bounces last week indicates that Kennedy should get plenty of opportunity through the midfield this week. When he has been given that role he has consistently posted scores in the 80 point range over his career and I love the wet and slippery conditions for him as it maximises his strengths (tackling and contested play) and minimises his weaknesses (lack of speed and foot skills).

Dan Houston (DS $11,980) looks nicely priced after two solid weeks where his injury issues appeared to subside and now coming off a 9 day break. Houston has posted back to back 97+ point games and has shown 120+ upside this season. It is an elite matchup no matter what position he plays in this game with the Suns giving up a lot of points to defenders and midfielders this season.

Ben Cunnington (DS $13,560) hit for us last week down in Hobart and once again we get the ground he loves. In two games down at Blundstone this season he has posted 126 and 113 fantasy points. On this slate there is little risk of him being tagged, which almost makes him a lock and load play for me. 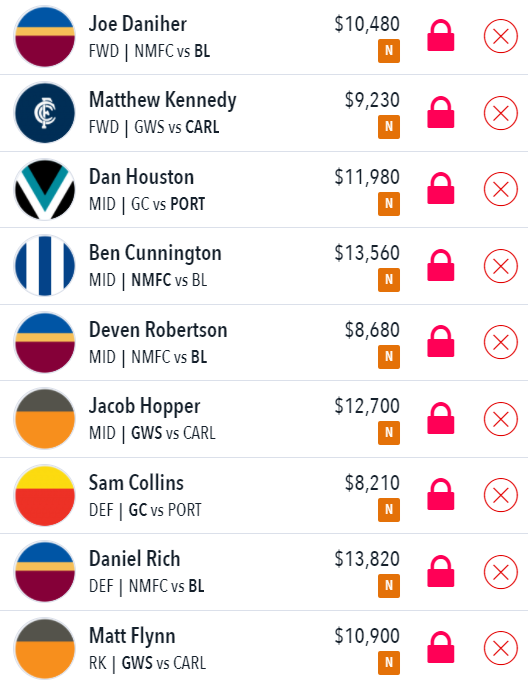