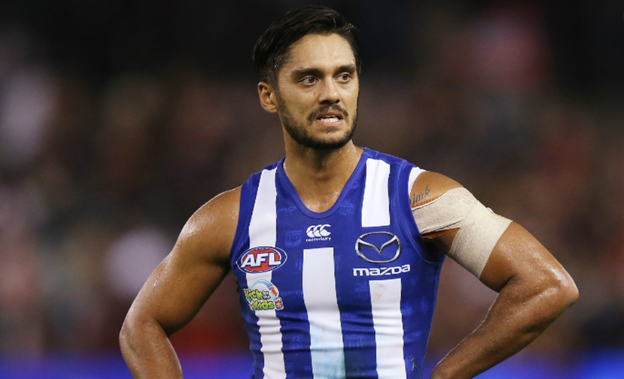 Super Saturdays are back as we get a ripping four game slate to dive into this week. As always there are massive daily fantasy contests on offer, so pick your poison:

Cool temperatures and sprinklings of rain across all three locations next week. There is nothing that appears heavy enough to have a major impact on the game, however just monitor the forecast up until the first bounce.

Gold Coast are the team to target through the midfield as well. Giving up 90 points per player every week to the position, these number balloons to 114 per game when you isolate the top three scorers. It is not surprise to see both North Melbourne and Collingwood also sitting top four for points conceded to the position, however when it comes to the Magpies the last five weeks have been a different story as they have had a significant change to their game style.

Let’s make it three from three as we look at the ruck position. The Suns do not have an AFL level ruckman due to injuries and as a result they have given up 90 points per game to the oppositions number one ruck this season. This mark has increased to 98 per game over the last 5 rounds.

Trent Bianco (DS $7,520) notched up back to back 70+ point games in his first two matches of the season before having a down game against the best team in the competition in Melbourne. His price has fallen nicely back into the $7K range and he draws an elite matchup against Fremantle who are top 3 for points conceded to backs as noted above and are giving up above average numbers of uncontested possessions and marks.

Curtis Taylor (DS $7,320) is coming into this game off back to back 70+ point games and averaging 67 points from his last four matches. Like almost every Kangaroo player he loves playing down in Hobart and on this slate, they have one of the best matchups in the league against Gold Coast who give up the most fantasy points in the league.

Jeremy Sharp (DS $5,000) came in as huge chalk for his first AFL game last season but managed to play just 2 games all season for fantasy returns of 34 and 27. Players might be still carrying scars from these performances but I expect he will still garner a fair bit of ownership at the minimum price. Sharp has been dominating in the VFL posting back-to-back games of 27+ touches for an average of 100+ fantasy points in this period (115 points last week).

Will Hoskin-Elliot (DS $10,230) has been somewhat rejuvenated in recent weeks as he has been pushed up to the wing and posted 93 and 103 points in back to back games (the 103 point game coming against Melbourne). On this slate as noted above he draws a much more friendly matchup against the Fremantle Dockers who give up above average possession numbers. For those who love the milestone game narratives it is also his 150th AFL career matchup.

Aaron Hall (DS $14,390) has been one of the safest plays of the season in 2021, read that sentence again and imagine I told you that would be the case during the preseason. His role across half back has seen a historic level of junk possessions racked up en route to a low score of 98 points (and just two under 100) from his last 10 games, not counting his injury affected 35. On this slate he draws the best matchup in the league for defenders down at the Kangaroos second home (and Hall’s home state) in Hobart.

Ben Cunnington (DS $13,670) / Jy Simpkin (DS $13,460)… yes I will be stacking up North Melbourne! Both Cunnington and Simpkin have shown to be on another level at the friendly confines of Blundstone Arena and with cold weather a sprinkle of rain they should dominate on the inside against one of the leakiest midfield groups in the league. Cunnington has posted 3 tonnes from 3 games down at Blundstone this season (2 of which came against elite midfields in Melbourne and Brisbane), and Simpkin has done the same. They are both still nicely priced at under $14k. 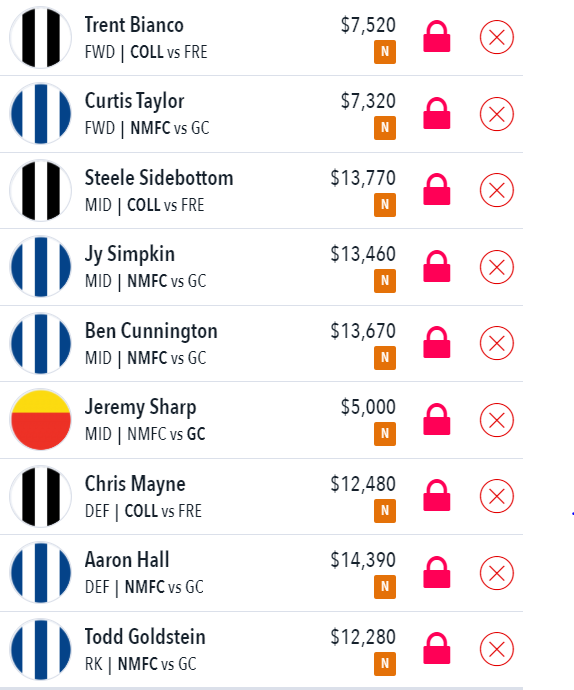