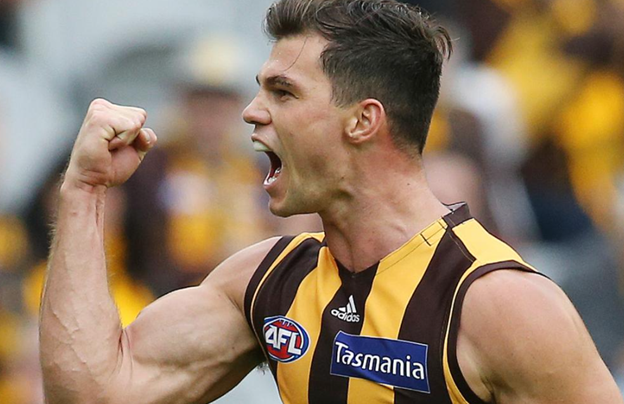 Super Saturdays is here again and we get a fun three game slate to dive into this week. As always there are massive daily fantasy contests on offer, so pick your poison:

We have absolutely perfect conditions for football across the three locations for this Saturday slate. It may be a little chilly in Launceston and Melbourne but there is no sign of rain anywhere! Let’s play ball!

Hawthorn look to be the clear team to target, especially for premium midfielders on this slate. When you isolate the top three scorers at their positions they give up 113 points per game, which is the highest amount in the league this season. St Kilda are the other option, giving up the fourth most points in the league, however this number has been in huge decline over the last 5 weeks, conceding just 77 per game.

Max Holmes (DS $5,000 DK $2,800) is an athletic wingman who will play plenty of time off the half forward and push up towards the ball. We have seen in his two full games at AFL this season he has posted two games of 56+ fantasy points, which when you are prices at the minimum becomes over a 10x return. This game is on the MCG, whose spacious size should suit both the Cats chip mark uncontested style as well as provide more running space for Holmes.

Adam Cerra (DS $11,760 DK $5,700) is priced too cheap now that he is fully entrenched back in his role from early in the season. He attended 50% of the centre bounces last week and played a significant role all over the ground posting 98 fantasy points (slowed in the second half with just 32). On this slate, he draws the best matchup in the league for elite scoring midfielders as noted above the Hawks give up the most points in the league to the top three scoring players at the position.

Daniel Howe (DS $10,780 DK $5,300) has been playing a lot more midfield time in recent weeks and it has been paying dividends from a fantasy perspective. He has posted four of his last 5 games at 82+, including a ceiling game of 111 points two weeks ago against the Giants. On this slate he has the home ground advantage down at Tasmania and as noted above should take advantage of the fact that Fremantle give up one of the highest numbers of uncontested possessions in the league.

Jeager O’Meara (DS $13,530 DK $7,100) absolutely loves the friendly confines of UTAS Stadium. From his last 9 games on that ground 6 have been 109+ fantasy points. I will be stacking up Hawthorn players given their edge on the Tasmanian ground and Jeager will be one of the key foundations of these stacks.

Patrick Dangerfield (DS $13,830 DK $6,800) has been fully unleashed in the midfield now as he hits full flight after returning from injury. Last week his attendances at centre bounces increased to 74% (second highest on the team behind Rhys Standley) and he responded with a classic 149 point performance. On this matchup he draws Carlton who are slightly above average for contested possessions conceded and tackles, which both play right into Dangerfield’s game style. 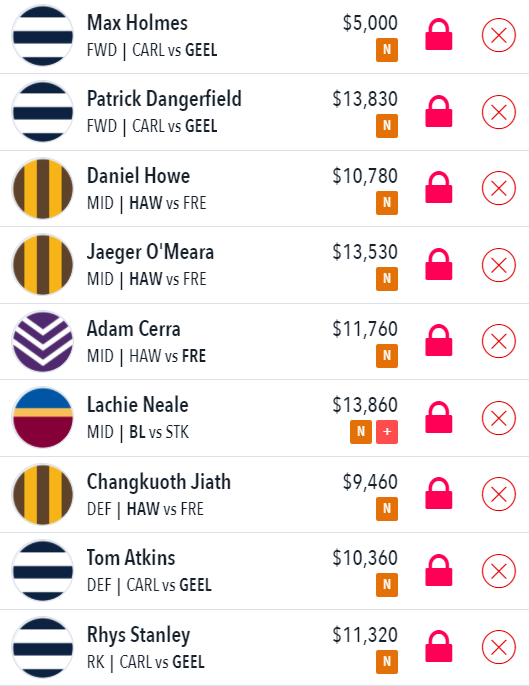