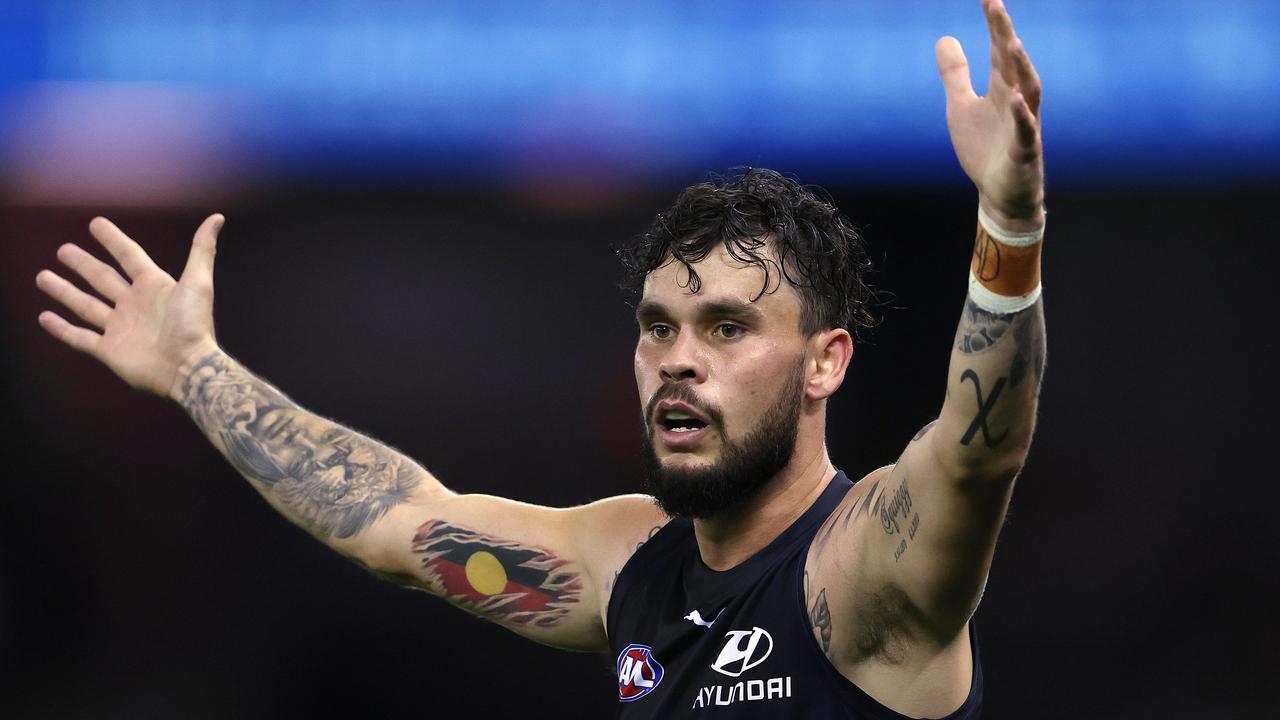 Time to move right onto Round 2 of the AFL Premiership Season as two historical titans resume their rivalry with Carlton taking on Collingwood at the MCG. There are a wide array of massive daily fantasy contests to suit whatever your preference is:

Just one round into the season doesn’t give us much of a sample size when crunching the data (you can see the Round 1 Points Against Data HERE), however we can still look back to last year to get an indication of where to attack. Remember don’t take these as gospel as teams can change significantly year to year, particularly if there have been significant personnel or coaching changes.

The one area that stands out to attack in this matchup is back's against Collingwood. Last year the Magpies gave up the most points to the position at over 4 points per player above league average. This mark skyrockets to +6.6 points per player above the average when we isolate the premium backs (top three scores). This trend didn’t stop in round 1 of this season with Caleb Daniel (111), Bailey Williams (106), Alex Keath (96) and Taylor Duryea (87) all racking up big fantasy scores. 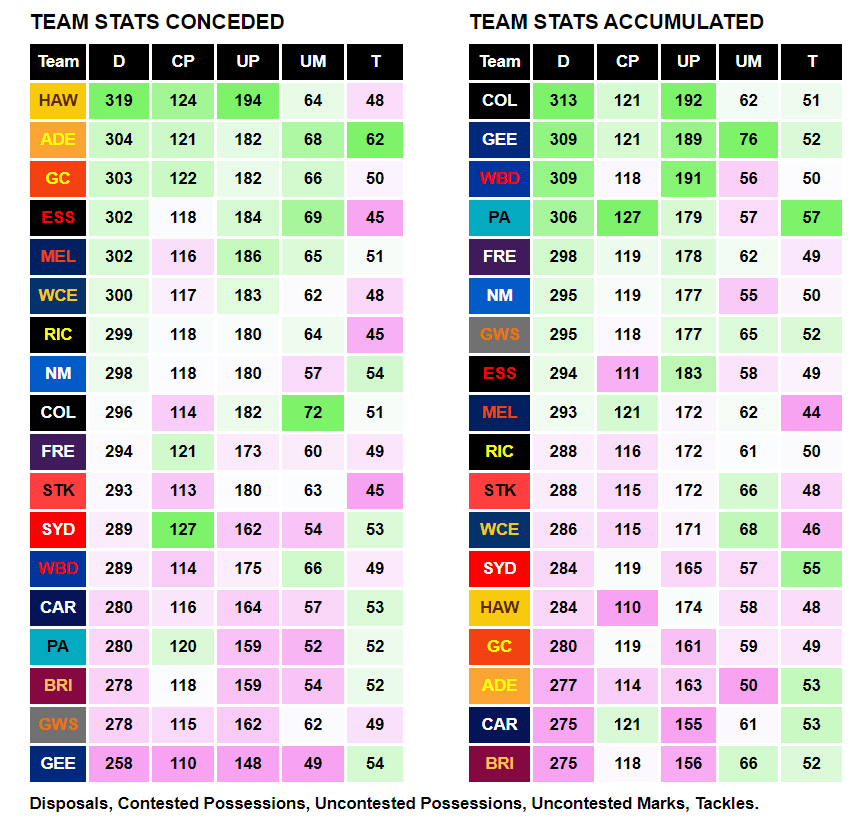 This interesting thing to keep in mind is that in 2020 Carlton accumulated the second fewest disposals in the league, while also holding the opposition to the 5th fewest overall fantasy points. Meanwhile, Collingwood accumulated the most disposals in the league, which means despite the fact the Magpies conceded fantasy points (particularly by way of uncontested marking), doesn’t mean that Carlton’s game plan will necessarily take advantage of it.

Brayden Sier (DS $8,340 DK $4,600) didn’t set the world on fire in Round One posting just 35 fantasy points, but it wasn’t due to lack of midfield opportunity. He attended the third most centre bounces for the Collingwood team, but was on the field for just 60% game time. That said at this price, assuming he remains in the team I will go back to well at likely lower ownership than we got last week after he burned most of the field.

Zac Fisher (DS $9,490 DK $5,200) should be low owned this week and he was another player who saw midfield opportunities in Round One, attending 7 centre bounces. He racked up 20 disposals and 65 fantasy points, which doesn’t sound that big, but when you consider the match and the opponent it was enough of a value return in a single game contest. I expect this slate to be somewhat similar in that fantasy scores are unlikely to be through the roof and Zac Fisher will make a nice point of difference to your lineups.

Sam Petrevski-Seton (DS $9,910 DK $5,800) was another player who started the season slow in Round One managing just 56 fantasy points across half back. This will be an elite matchup for him, however, as we noted above the Magpies gave up the most fantasy points to defenders last season.

Jordan De Goey (DS $10,510 DK $5,600) was the most popular player on the slate against the Bulldogs last season and once again and we get the same old Jordan De Goey. His midfield time wasn’t as high as many were expecting, attending just 38% of the Magpies centre bounces. I am happy to back over the play and assume that ownership number will drop. De Goey has huge upside no matter what the position and he is still receiving midfield minutes, eventually Collingwood may realise they need the help through that position to actually get the ball up forward.

Zac Williams (DS $12,130 DK $7,200) is first up after being out suspended last week. He has been slated for significant midfield time at Carlton and as we saw during stretches at GWS where he played in the middle that typically means huge ceiling scores. In 2019 during a 10 game stretch to close out the season Williams went into the midfield for GWS to cover an injury ravaged side and posted 101 points per game, including games of 120+ and 140+. I am happy to take on the chance he has a similar opportunity at Carlton given his price point.

Patrick Cripps (DS $13,870 DK $8,000) didn’t quite go on with it after a blistering start last week posting just 87 points from 28 touches. That said, he did look much more like the Patrick Cripps of old compared to last season. He attended the most centre bounces and was resting forward less than in past years. If anything his match fitness let him down late, I am expecting better for the run and happy to pile in at a price under $14k.

Brody Grundy (DS $14,670 DK $10,400) is clearly not looking like the player he once was. That said, in a single game slate it is a one-on-one matchup where it is just as much about the price comparison and where else you can spend money as it is about hitting a ceiling score. Last season when these two rucks met Grundy posted 90 fantasy points and held Pittonet to just 43 points. In Round One, Grundy had a very poor performance by his standard but still made his way to 85 points, which is a relatively safe floor in a game that could be a low fantasy scoring contest. 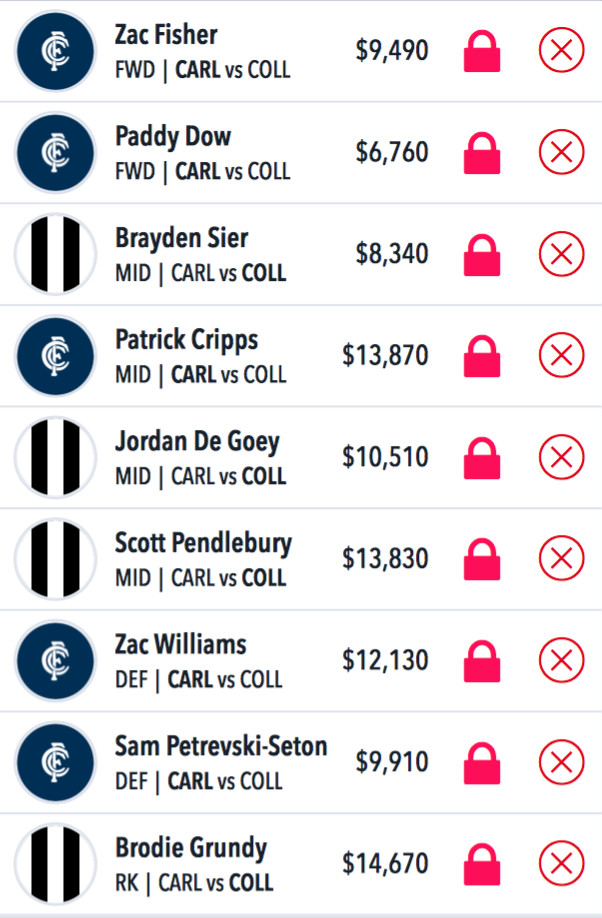