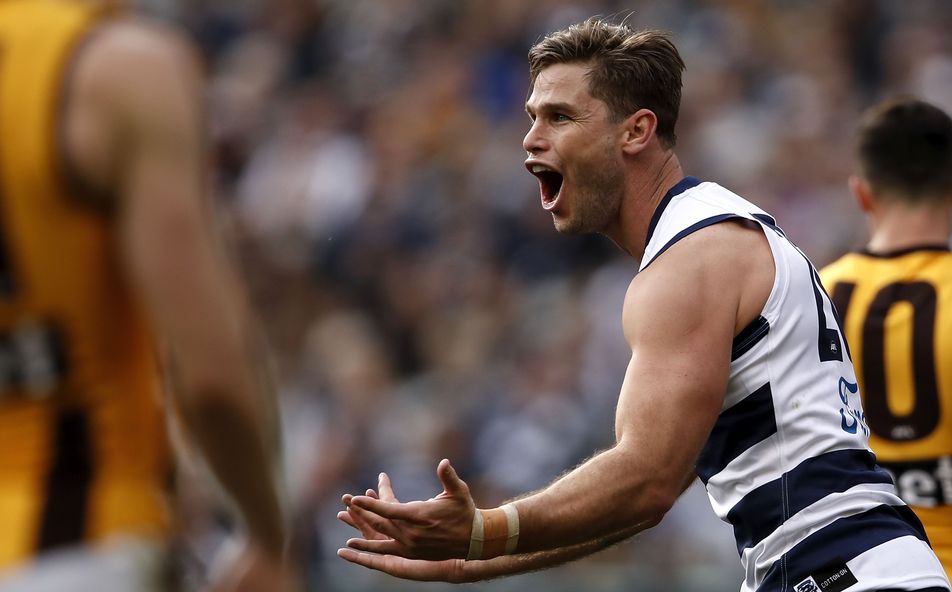 It’s Easter Monday and we have the traditional blockbuster between Geelong and Hawthorn at the MCG to sink our teeth into! This match always takes pride of place on this public holiday and the major fantasy platforms have plenty of contests to have a crack at: 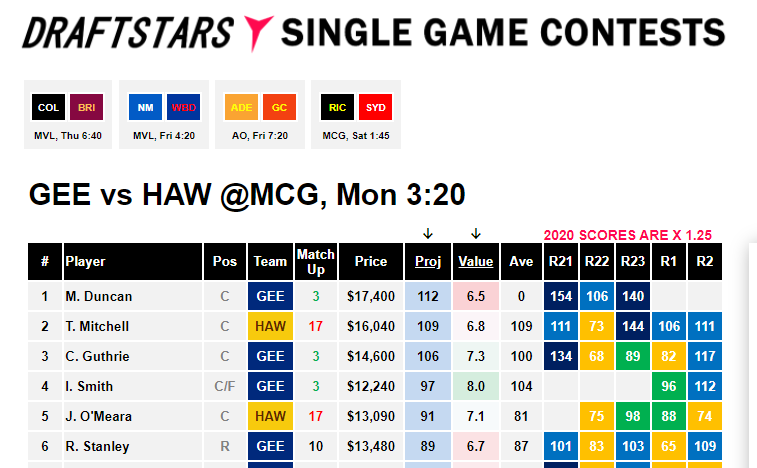 While we only have two games of data to work with so far this season, the early numbers on midfielders against the Hawks look very promising. They sit comfortably in the top 3 for giving up the most points to opposition mids, despite coming up against a couple of midfields which aren’t renowned for dominating the ball in Essendon and Richmond. Hawthorn gave up the 6th most fantasy points in the midfield last season so this isn’t a new phenomenon.

Geelong were widely known as one of the stingiest teams in the competition last season and that has carried on again this year. They are particularly dominant against opposition defenders and midfielders, where they have sat clearly in the top 2 hardest teams to score against dating back to the beginning of last season. With the Hawks also having a long history of giving up points to opposition backs, these appeal as obvious positions to hunt Cats players for your lineups.

Max Holmes (DS $5,000, DK $3,000) was originally seen as a long-term prospect when drafted by the Cats at pick 20 in last year’s AFL Draft, given his lack of football experience. However the speedster - a former Australian U18 400m hurdles champ - has barged his way into the senior side on the back of two excellent VFL practice match performances, including a best-on-ground effort last week against Port Melbourne. He has played both inside and out and will get plenty of support in this strong Cats lineup. Worth plenty of thought at the base salary!

Changkuoth Jiath (DS $8,390, DK $4,200) - affectionately known as CJ by the Hawks faithful - looks to have taken his short career to a new level in 2021. With 47 possessions in two games he has been finding plenty of the ball across half back and his salary is yet to catch up to his 76 point average. Be wary that this is a much tougher matchup on paper but he is still on an upward spiral and clearly underpriced.

Jordan Clark (DS $9,470, DK $4,200) bounced back last week to serve up what most expected as a bare minimum in his round 1 flop. Now in his third season, he does look ready to make the leap to the next level and this looks a fantasy friendly opportunity for him to build on last week. His Def/Mid eligibility should make him quite popular, but a pretty solid floor and his ability to go 10x at this salary makes him a player you should have good exposure to.

Tom Atkins (DS $9,830, DK $4,800) has thrived in his new role off a half back flank for the Cats this season. 5 frees against him hurt his round 1 score but he shone with 88 points against the Lions last week, despite giving away another 4 frees. A superb tackler, his forward eligibility also makes him an excellent compliment if you are looking to stuff your lineup full of Cats defenders.

Isaac Smith (DS $12,240, DK $7,800) comes up against his old side Hawthorn on the back of an impressive start to his Cats career. His 112 against the Lions last week showcased the high ceiling he has at this salary and his forward status gives you additional flexibility for your lineups. His fondness of getting involved in mark-kick sequences makes him an excellent piece in a Cats stack.

Cameron Guthrie (DS $14,600, DK $10,200) has developed into one of the better fantasy scorers in the competition, capable of scoring across all categories. He tagged Tom Mitchell in this matchup last year which may worry a few fantasy coaches, however Mark O’Connor was used in the tagging role last week against Lachie Neale. Given the Cats are still missing Patrick Dangerfield, the Cats appear to desire the offensive output from Guthrie that he has showcased over the past year. 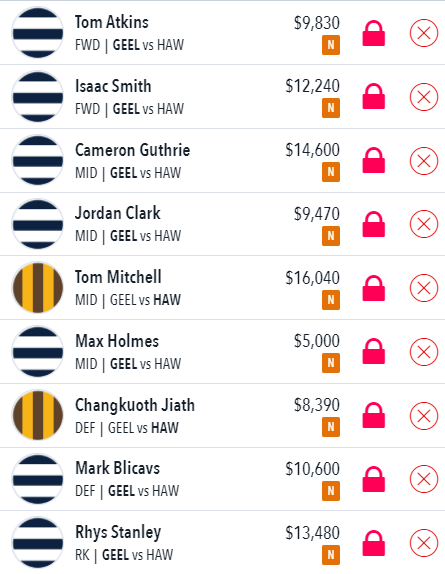 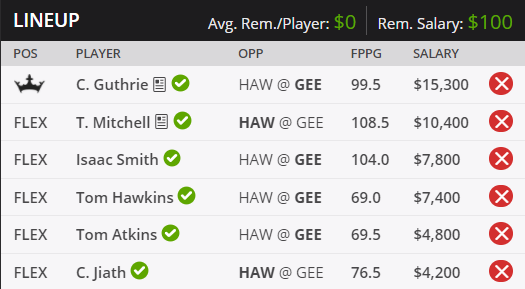