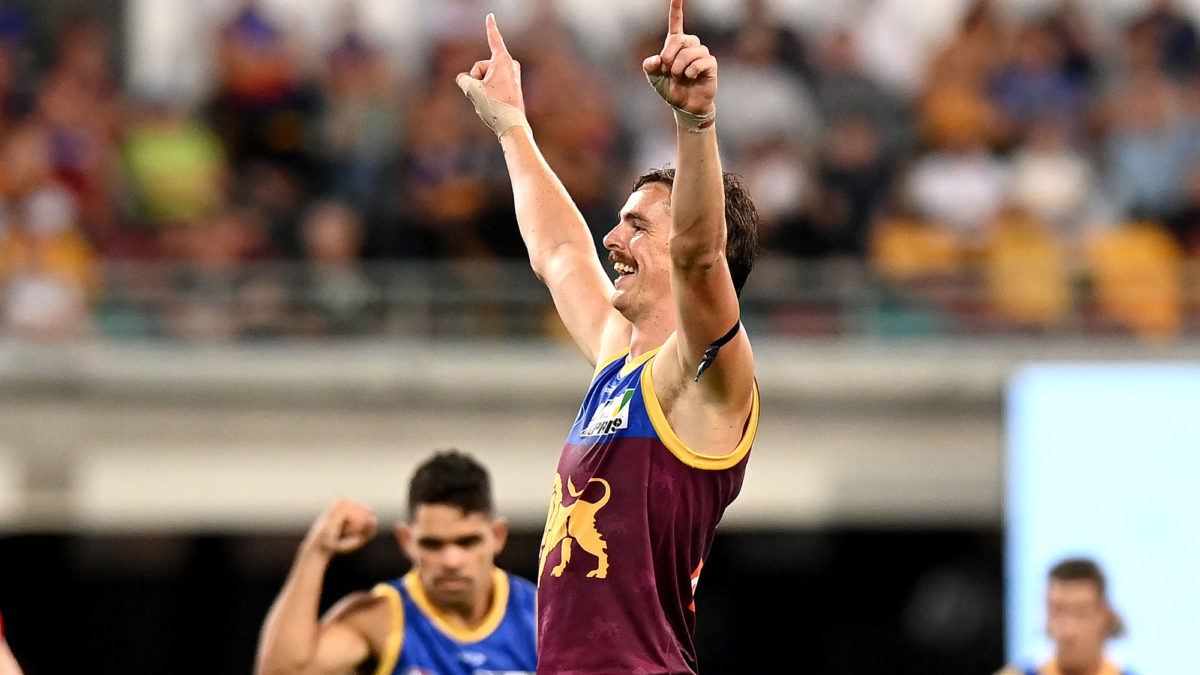 Round 8 rolls on as we move straight into a three game Sunday slate. I am happy to take the Subs vest off with Jesse and Hef away! Let’s see what we can do with what we got. The AFL DFS scene has been flying and today we have the following offerings:

Shaping up to a good slate this one with varying teams’ strengths and weaknesses you can attack. While it can be easy to look up the Western Bulldogs midfield and stack the likes of Bontempelli and Macrae, the Eagles have the plumb matchup against a leaky Hawks midfield. The Hawks are currently giving up the 2nd most fantasy points through the midfield for top 3 and bottom 3. The Saints dined out last week with 4 midfielders passing 100 and Jack Billings on 98. This season alone the Hawks have given up huge numbers to McGrath (Ess – 141), Guthrie (Gee -153), Oliver (Mel – 121), Keays (Adl – 156) and Jones (Stk – 151).

Richmond in Round 7 got a big boost from its backline against the Bulldogs and this round it is Carlton’s turn. The Bulldogs are 2nd in the league behind Collingwood in leaking to opposition backs with huge numbers to the Backs Top 3. Not far behind are Fremantle whose numbers are trending upwards for opposition backs. However, the Lions are last in the league for possessions accumulated. I would not discount it but there are some cheap options down back for the Lions.

With Brisbane currently 5 goals favourites, this could be a smash spot for Lions forwards against a Dockers side struggling to stop opposition forwards. Currently first in the league for the Top 3 opposition fantasy scoring to forwards, Freo can’t seem to stop key position forwards this season. Tom McDonald (110), Harry McKay (137), Taylor Walker (74), Curtis Taylor (91) and Jack Darling (114) have gone big against Fremantle. The Lions have a spearhead up key forward which I’ll highlight shortly. 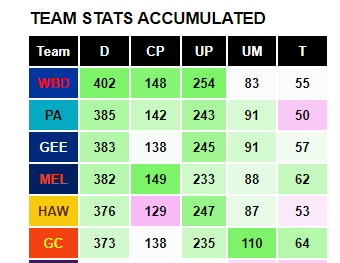 However, the Bulldogs are very much alive in this slate by continuing to lead the league in possessions accumulated. Carlton is middle of the road in opposition scoring but I wouldn’t go too crazy on the backs or mids. However, like Freo, Carlton is giving the opposition forwards a nice time by allowing the 2nd highest total in the league. If you think the Doggies can kick a big score? Then go right ahead here.

Don’t worry about last weeks low game from Hipwood last week. The wet conditions did not suit and went goalless for the first time this season. This is a fantastic matchup against a Freo team struggling to curtail key-forward scoring. 80+ is a real possibility and certainly has the upside in the cheap forward category.

Good surname this one… Popular pick last weekend after getting his first run-on start for the Lions. 14 disposals and 5 tackles in his 63FP again the Power and continue to rotate through the midfield in the absence of Lachie Neale. But the key stat you would want to take point is that Mathieson attended 59% of the CBA’s which outscored the likes of Zac Bailey and Deven Robertson. The price is still cheap on this slate.

With some attendance in the Centre for ruck contests in recent weeks, then I really like Daniher in my ruck position. As you can probably tell by now that I really like the Lions match up and Daniher fits that mould as a high ceiling key-forward. 80FP on a wet track against Port last week is proof that smokin’ Joe can adapt to any conditions. The remaining Ruck options are pretty uninspiring, so the confidence is high on Joe.

Probably the only player in the league whose fantasy scores have increased week on week! Weitering took 11 marks last week against the Bombers and hit the fantasy ton for his second time in his whole career. Disposals, Marks and Tackles have all increased in his role down back and should see some fantasy fun with the Bulldogs letting teams build in their own back half. Sam Docherty is the obvious play, but I am looking to correlate with other Blues backs who can get on a chain of possession.

Ah yes, the leagues well known down-hill skier (Sorry Eagles fans) is in the spotlight this week trying to break the trend of his yo-yo fantasy scoring in Melbourne. 100, 58, 103, 47, 101 ____? One thing that will boost buyer confidence is the knee injury to Liam Duggan who has been excellent in his ‘quarterback’ style play off Half-back. With Shuey and Yeo still missing, the Hawks conceding high uncontested ball (7th in the league) and the large spaces of the MCG, then I think that pattern will end on Sunday.

Gaff is going to be one of more popular players on the slate and rightly so. Getting a DS $1,200 discount on the likes of Sam Walsh and Jack Macrae in a matchup against the Hawks who leak to opposition premium mids. Tim Kelly took all the spotlight last week and is still cheaper than Gaff (flipped for DK) for this matchup. So, if you have room then you could look to run stacks with Sheed as well. But in a vacuum, I am relying on Gaff’s floor and huge ceiling in what could be a fruitful day for Eagles fans. 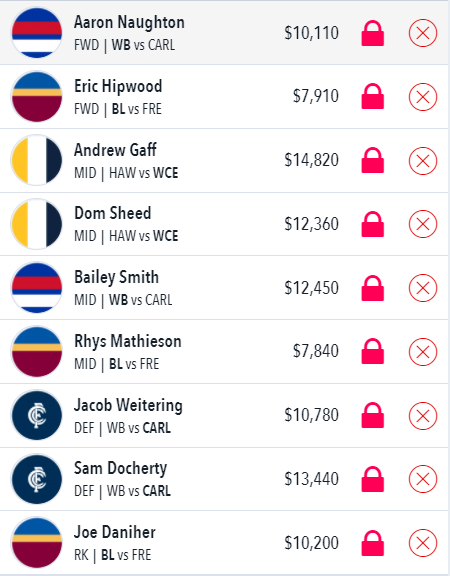 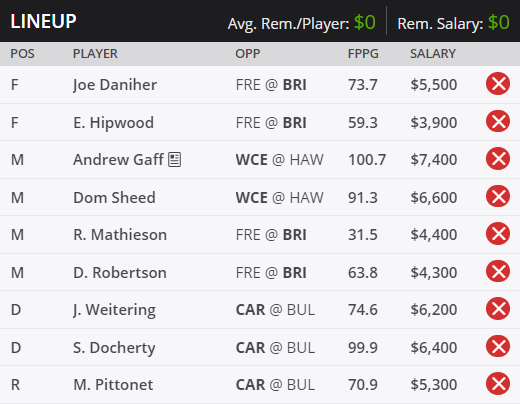