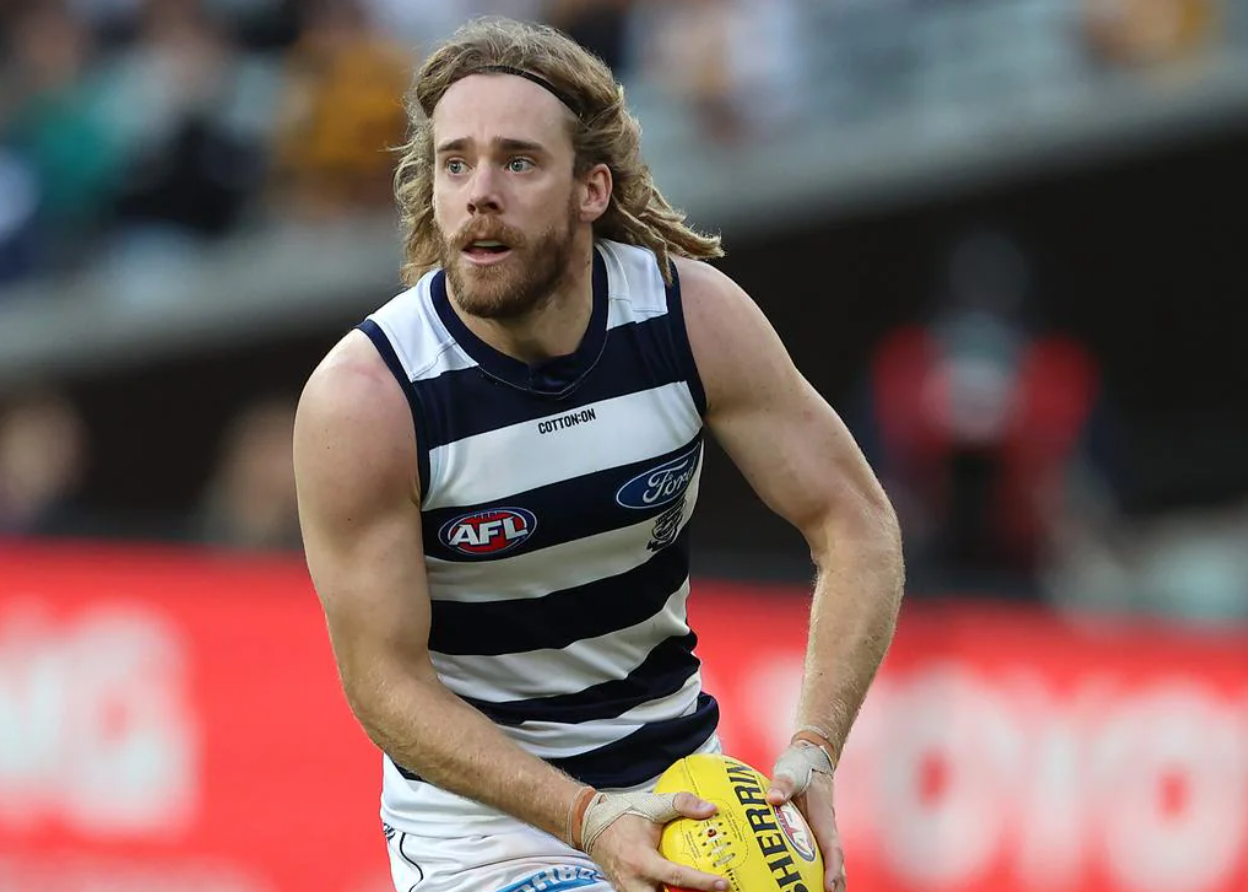 Friday night football this week serves up a Grand Final rematch where the Geelong Cats will be eager to atone for their defeat at the hands of the Richmond Tigers last year at the Gabba. The Tigers come in snarling after defeating the previously unbeaten Western Bulldogs last week, while the Cats will be keen to bounce back after a controversial loss in Sydney against the Swans. Get involved in the action with a range of great contests across the major DFS platforms, including the fantastic Draftstars Live Final promotion with more Golden Tickets up for grabs: 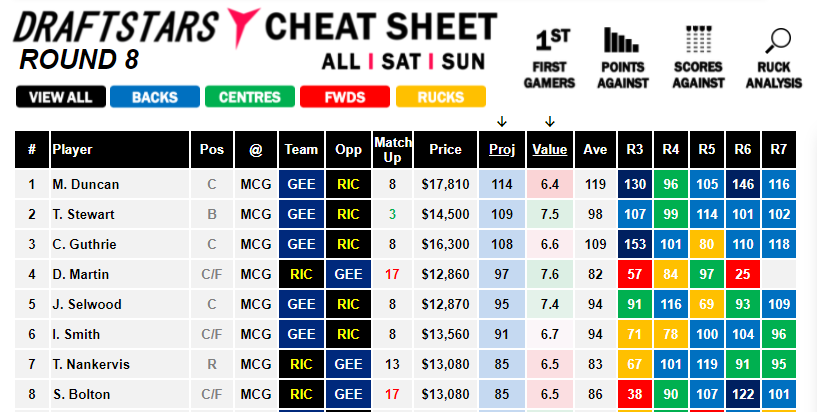 The contrast could hardly be bigger between these two sides when we look at fantasy points conceded to opposition defenders. Richmond are happy for teams to chip around in the backline while they set up their defensive structure, while Geelong prefer to close the space and force the opposition to kick long to a contest. With numbers like these, it’s hard to go past a combination of Cats backs in your lineups. 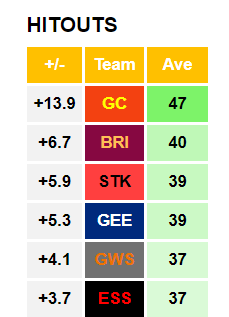 In fact the Cats are clearly the stingiest side in the comp when it comes to giving up fantasy points to their opposition. The only are they give up an above average number of stats is in the ruck, where Rhys Stanley gives up more hitouts than the league average. Toby Nankervis is in excellent form so expect him to take advantage of this situation.

The Tigers are middle of the pack when trying to restrict opposition midfielders, but when it comes to forwards there’s not much between the two sides. Richmond are particularly good at restricting the opposition’s best forwards, whereas Geelong are quite adept at shutting off the lesser names. It looks like a tough night ahead for forwards in this game.

Riley Collier Dawkins (DS $6,350, DK $3,600) was quite impressive on debut against the Doggies, racking up 63 fantasy points with a fantasy friendly role where he attended 68% of the centre bounces. It doesn’t get any easier here against the Cats but with that level of opportunity his salary doesn’t looked to have reached his expected output just yet. Don’t think he’s a lock and a score in the 40s wouldn’t shock, but he does seem quite likely to at least hit value again.

Nick Vlastuin (DS $7,980, DK $3,800) returns from injury in this match after injuring his knee in round 1. Here’s a guy who averaged above 70 for three consecutive seasons (accounting for last year’s shortened quarters) and that average would get you a 9x return here. The matchup against the Cats isn’t great, but if you’re looking for an underpriced defender, here he is.

Sam Menegola (DS $11,300, DK $7,000) had a slow start to the year but is starting to tick over alright in the past three weeks. I think this game sets up quite nicely for him here - Richmond do concede a lot of uncontested ball and the wide spaces of the MCG provides plenty of space for those out on the wings. He’s got proper 10x upside at this price and appeals as a high-risk, high-reward option.

Dustin Martin (DS $12,860, DK $8,000) returns to the side after an enforced layoff due to concussion suffered against Melbourne a fortnight ago. His price has come down slightly on both platforms but given he was cleared to travel to NZ in his time off, you wouldn’t expect there to be any lingering effects of that injury. Geelong don’t have an obvious matchup for the champ and who could forget his Norm Smith winning effort against the Cats in last year’s Grand Final - scoring 98 fantasy points along the way.

Tom Stewart (DS $14,500, DK $10,000) is in superb form, having gone 99 or better in his past five matches. This is a great matchup for him and he was superb in last year’s Grand Final loss against the Tigers despite the loss. My only reservation is a hunch that Richmond may put a bit of time into him given he is the best user in the Cats back half, but if left to his own devices it’s hard to imagine he won’t score a 100+ score once again. 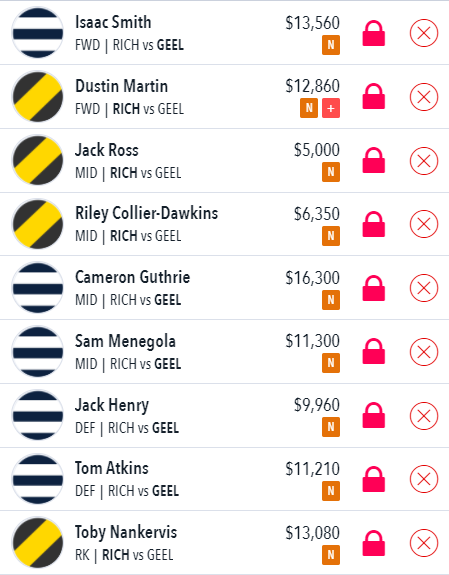 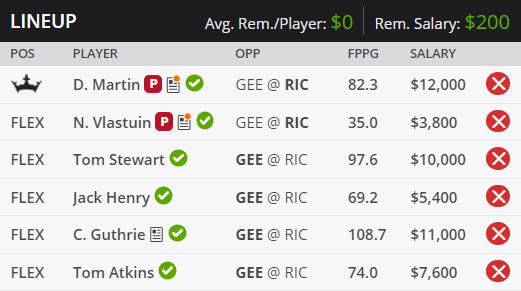