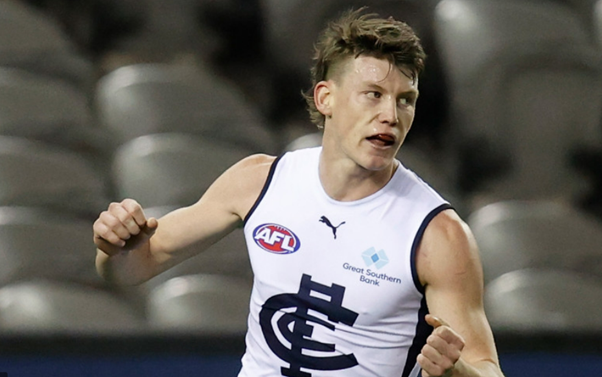 The fun 3 game Sunday slate is here again for Round 11 of the 2022 AFL Premiership Season. Draftstars has all the daily fantasy lovers covered with a $75k main and a wide variety of other contests, including qualifiers to the massive $500k live final later in the year:

Absolutely perfect football conditions in Melbourne for the matchup between two of the leagues biggest clubs in Carlton and Collingwood, and obviously the clash at Marvel Stadium will also have no issues.

Out in Adelaide, however, where Port will host Essendon there is a high chance of rain in the afternoon with up to 15mm expected. This could have signfiicant impact on the game and I would consider looking at targeting inside players over outside runners and rucks in this matchup.

St Kilda have been giving up a significant number of uncontested marks this season, particularly across the halfback line where they concede the second most fantasy points in the league. Their structure has allowed opponents free space horizontally in that area of the ground and I expect North to be hemmed in for the majority of the game.

It is absolutely no surprise to see North Melbourne conceding the second most points to forwards this season. They are second last on the ladder and have given up the second most goals. St Kilda are over 40 point favourites and every man and his dog will be rightly stacking their forward line on this slate.

Marcus Windhager ($6,180) has already shown fantasy scoring potential this season with 49 point performance two weeks ago in less than 50% game time. He backed that up with a 48 point game last week, but this week he draws one of the best matchups in the league against North Melbourne that should allow him to hit the score board and boost his score substantially.

Flynn Perez ($7,460) has been playing that outside role on the wing and pushing toward half back in recent weeks and we have seen this increase his fantasy output with a 67 and 69 point game from his last three matches. As I noted above St Kilda have been giving up points to outside players this season and I love linking Perez with North backs on this slate.

Bailey Scott ($11,300) has assumed the juicy North Melbourne back role since Aaron Hall went down with a hamstring injury. Since then he has averaged over 80 fantasy points per game and we saw what can happen last week when the matchup is right, posting 111 fantasy points against Melbourne. This week’s matchup is quite similar to the Demons, with St Kilda structuring up in a similar fashion and allowing the second most points to back this year (behind only the Demons).

Tom De Koning ($9,100) will continue as the sole ruck for the Blues this week and will draw a softer opponent than usual against the Pies with Brody Grundy still out with injury. De Koning has been improving each week posting a 74 point game last week against the Swans. He will break out for a major game at some stage this year and I will be catching while he is at this $9k price point.

Sam Walsh ($15,310) should thrive in this game at the MCG, which has been his best ground over his career averaging over 100 points per game. The open spaces suit his outside game and Collingwood have given up the fourth most disposals this year and fourth most uncontested possessions. Walsh has a great history against the Magpies posting a massive 155 point game against them last year.

Brad Crouch ($15,700) benefits significantly from Jack Steele being out of the line-up as he assumes the number one inside role for the Saints. He is averaging over 110 points per game across his last three contests and draws one of the top matchups in the league for midfielders this week against North Melbourne. 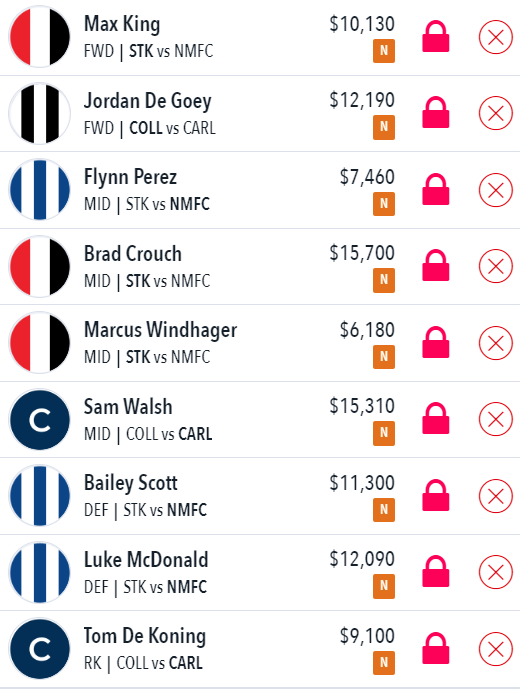