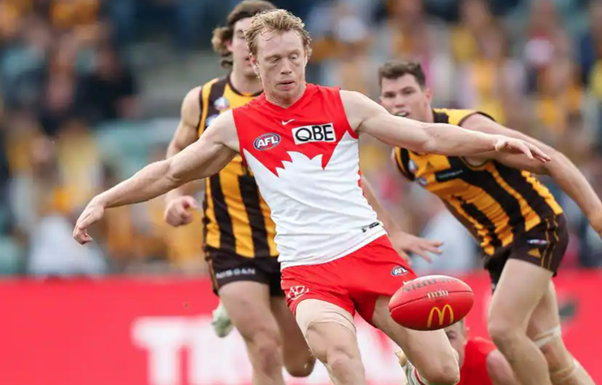 Round 15 of the AFL Premiership Season brings us one of the best slates of three games you will ever see. With all three games featuring matchups between teams in the top 8 there is a lot on the line as the race for finals heats up.  First up is the Blues and their injury-hit defensive unit hosting the Dockers at Marvel Stadium. Then it's the Cats taking on the Tigers at the MCG in twilight footy, before the Saints head north to take on the Swans.

Draftstars has all the daily fantasy lovers covered with a $75k main and a wide variety of other contests, including qualifiers to the massive $500k live final later in the year:

Weather conditions at both locations for football tomorrow…absolute perfection. Pick your teams freely and lets play some fantasy footy!

There are limited options to target with such quality teams on offer for this slate. One area that stands out is backs against St Kilda. The Saints have consistently hemmed teams into the back 50 and conceded possessions though this part of the ground in 2022. The Saints also give up a high number of uncontested possessions this season, so I love linking up Swan wings with their half backs on this slate.

The Swans have been getting crucified in the ruck this season giving up 87 points per game to the opponents number 1 ruck. This number has ballooned to 103 per game over the last 5 matches. It is an ideal setup this week for the Saints from a fantasy perspective as Rowan Marshall will get the sole ruck role with Paddy Ryder out.

Dylan Stephens ($8,330) comes in as outside player who will likely spend a significant amount of time on the wing for the Swans. Through his limited game experience, he has already shown the ability to put up a solid return for his value price point, including a 89 point game earlier this season against the Cats. The Saints are an elite matchup for an outside player.

Max Holmes ($7,890) returns to action after a significant lay off due to injury. He was the starting wingman this year and should return to that role. He has posted two 70+ point games this season through the early weeks, which would be around the 10x mark for his current price point. There will be plenty of opportunity for him in his role and I like playing midfielders against the Tigers who have never been a big lock down team from a fantasy perspective.

Rowan Marshall ($11,730) should unleash in this game. Historically he has been a 100+ point player when he draws the sole ruck role and this week with Ryder out he will assume that position. We get the added benefit of his price being reduced due to splitting roles in recent week and spending a lot of time up forward. As noted above Sydney have been getting killed in the ruck this season and Marshall certainly has the opportunity to hit his ceiling game of 120+ in this matchup.

Jake Lloyd ($12,910) has had a down year from a fantasy perspective as the Swans continue to play that fast and direct style and Blakely has began taking more of the kick ins. That said, as noted above targeting the Saints with backs is the best play on the slate and I will start builds around Lloyd. If they get on top of the game at home he loves junk time as much as anyone and still has a ceiling of well over 100 points at a mid range price.

Callum Mills ($16,480) has recorded just one game under 106 from his last 10 matches and also flashed ridiculous upside with 156 and 161 point games over the same period. He fills up on the inside and the outside and as a result I love this matchup for him and linking him with Swans outside players. 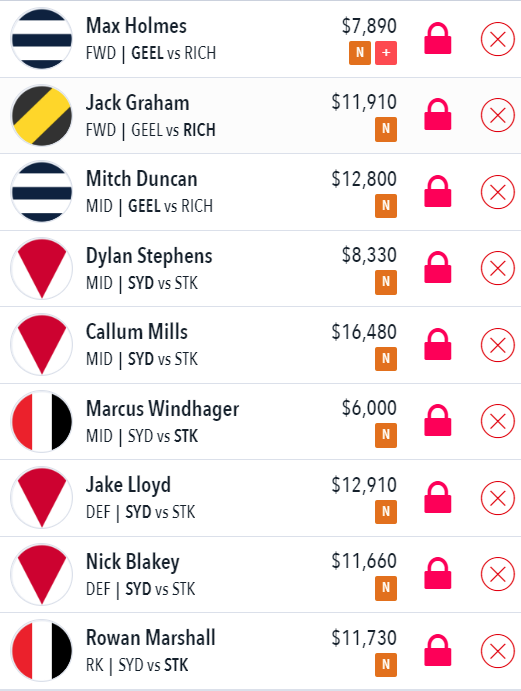