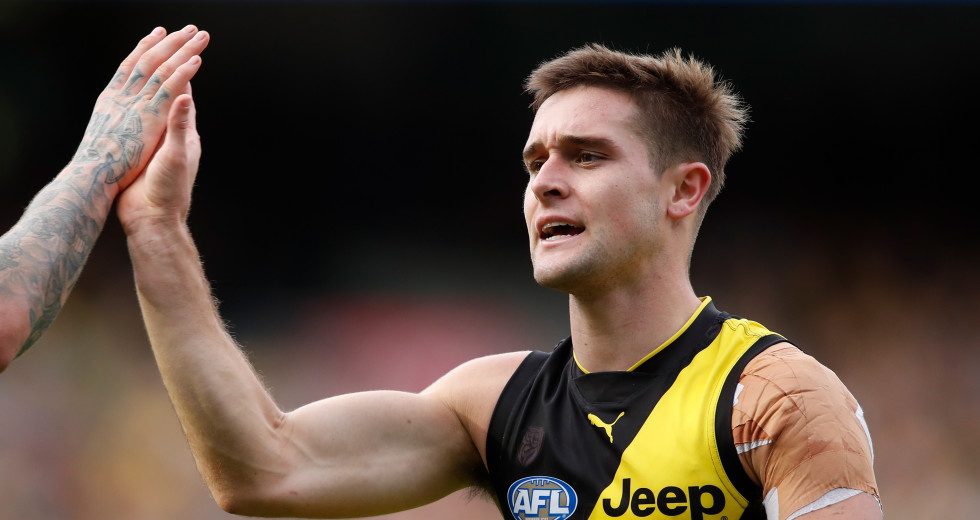 Footballs will by flying across the country on Sunday as flag fancies Richmond and Fremantle take to the park chasing more premiership points at the MCG and Optus Stadium respectively. With the top half of the ladder jostling for position as September nears, every game is important.

Although 14th versus 15th on the ladder may not seem enticing, both Greater Western Sydney and Hawthorn have both shown glimpes this year and looks to be an interesting match-up with rain of the forecast. A three-game slate awaits us in the DFS world, with weather set to be a factor as Round 16 comes to a close.

Torrential rain is expected to turn the GWS vs Hawthorn game into a mud fight, as up to 100mm could fall in Sydney. Elsewhere, the sun should be shining in Melbourne and Perth, perfect conditions for footy!

Both matchups and weather will influence our selections this week, setting up the possibility of some diverse line-ups. Let's take a closer look at our AFL Data Tools to find any trends that might help us construct winning lineups on Draftstars for this match.

Hawthorn and West Coast have given up plenty of points to midfielders this season, the Hawks being the worst for that stat. Conditions are likely to be wet and wild in the Hawthorn game on Sunday, so look at GWS midfielders who are willing to get in and under the packs. Richmond’s midfield mix is ever changing, so picking a low-owned Tigers onballer against the Eagles could be a slate winning move.

Understandably, the Eagles have conceded the most points to forwards in the AFL this year. It hasn’t been hard for opposition forward to cash in on West Coast’s woes, however tall forwards have particularly dominated. As a result, the focus is on the Richmond forward line, especially with the conditions forecast in other games.

The big ruck battle is set to take place in Sydney, as Ned Reeves and Matt Flynn look to take advantage of trying conditions. Both should be placed to score well based on the points against stats.

In my eyes, there isn’t much bankable value on this slate, so we must temper our expectations somewhat. Ralphsmith has been reliable if not outstanding as a bargain basement pick this year, hitting 60 five times with a high of 67. He can play a variety of roles but as with his teammates, should benefit from West Coast’s tendency to leak plenty of points to opposition players, which is clear in the Daily Fantasy Rankings Cheat Sheets.

Liam Baker’s stocks have risen sharply in the last few weeks, as he has taken over Dustin Martin’s role as the gamechanger among Richmond’s ranks. He has hit 100 twice in his last five games and gets a soft matchup this weekend. DFR’s CBA Charts show that Baker was also among the Tigers’ midfield rotation last week with 46% of CBAs attended, a great sign for his scoring potential.

We won’t know until Sunday how wet the conditions truly are in Sydney, but it is fair to expect wet weather football at this stage. Enter Jai Newcombe. The Rising Star hopeful is a tackling beast who goes to a new level when things get slippery, so he should revel in harassing Giants in the midfield. An average of 87 at this price is solid too.

Short’s scoring seems to have suffered since his move into the midfield, but he still has an incredible floor of around 85 points. Coming up against the Eagles, you can expect that floor to be even higher and Short has shown a ceiling of 120+ previously. He scored 123 against this very opponent earlier in the season.

This is a pick in the same vein as Newcombe. Green is a rising star of the competition and has survived the Giants’ midfield shuffle to remain a mainstay of the CBA group. As such, he has averaged nearly 94 across the season and the Hawks have been just about the worst team at combatting inside midfielders. I’m expecting 100+ here, with plenty of tackles to pad out the stat sheet. 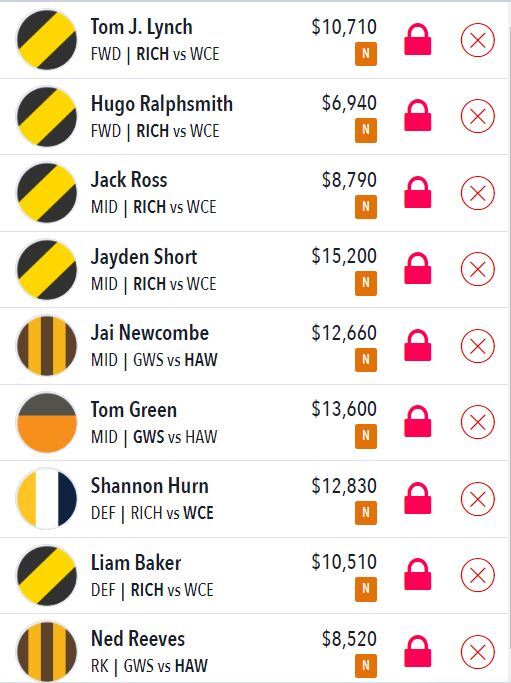