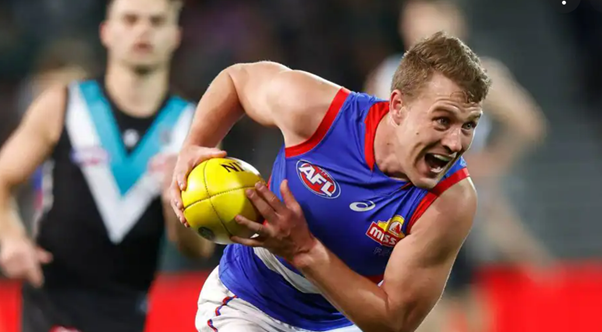 Super Saturday for Round 4 of the 2022 AFL Premiership Season is here and we return to 4 games of action this week! Draftstars have delivered with a $90k main and a wide variety of other contests for us daily fantasy lovers to get into:

There's also $50 and $2 AFL $500k Qualifier contests in the Draftstars for the end of year live event. Check out our article here with all the info regarding the AFL Live Event.

Yet another wet weather forecast in Sydney where the Swans will host North Melbourne. Now, this didn’t impact too much last time we had a similar forecast, however this week we have all seen how hammered Sydney has been getting by the rain. So at least expect the game and ground to be somewhat wet and slippery. Focus on contested players and consider the rucks in this matchup.

Melbourne and Perth both look perfect for football this weekend and therefore you can select players in these games without concern.

North Melbourne have given up the second most points in the league this season to defenders. That said, I highlight this in the preview to push you away from targeting it in this matchup. Given the weather and the fact that Sydney are heavy favourites and love to play a fast attacking style I expect the Kangaroos to be the team that will be pinned down in their back line taking possession of the football and chipping round (an approach we have seen regularly from North over the past year).

There isn’t a lot to target through the midfield on this slate, but the Tigers do pop up as giving up the third most points. I love this for two reasons, one this is a constant trend for the Tigers over the past 5 years, they never tag and on this slate they play one of the biggest scoring midfields in the league in the Western Bulldogs. Now we just have to try and get in the mind of Luke Beveridge to work out who is going to play in the middle!

Wow…no shock given North’s performance this year. But Swans forward line stacks are looking great for this matchup. They are almost 40 point favourites and the Roos have given up over 13 points per player above league average this season to forwards. If you are concerned about the weather as we approach the tip, focus on the small forwards who love a tackle.

Tanner Bruhn ($6,840) is quite simply priced too cheap. It appears that the game one zero, which is bringing his average down has messed with the Draftstars pricing model. In his last two games he has posted 78 and 68, both over 10x returns from his current price point. Bruhn was a chalk play last week and there is no reason that will change this week, however there are plenty of viable low price options so if you want to get off the chalk I think you can do it. Which brings me to…

Luke Edwards ($6,700)… I am going back to the well here. He didn’t come through last weekend against Fremantle, however the Eagles midfield looks even weaker this round as Shuey or Kelly didn’t return and Gaff goes out. Last week Edwards was sitting well under sub 10% ownership and as he showed last year he can offer 80+ point upside. He attended just 23% of the entre bounces last week, but with Gaff out another 60% open up as does time on the wing.

Tim English ($13,960) has started the season on fire, absolutely dominating around the ground while winning enough hitouts to keep the fantasy scoreboard ticking over. I love the matchup for him this week against the Tigers who have been notorious for conceding fantasy points in the ruck through recent years and also give up plenty of points around the ground. English should be a $15+k priced player and just lock him in until he gets there.

Tom Greene ($13,930)… ditto with this guy. I don’t care what the matchup is. Until his price gets up to the top bracket put him in. This will be the fourth straight week for me and he hasn’t let us down yet.

Patrick Lipinski ($11,290) should see an increased midfield responsibility this week with Taylor Adams and Jordan De Goey out. We saw in round one his upside is where he posted a 117 point performance. At this price point that is the return that can win you GPPS and on this slate he matched up against the depleted West Coast midfield, which should offer little resistance to the Collingwood squad.

Jack Macrae ($16,750) as noted above has one of the top matchups in the league for his position against the Tigers. The only concern will be around his position, as we saw last week where Bevo decided to throw him onto the wing for the entire fourth quarter and that resulted him being stranded in the 70s. I am betting we don’t see that again this week and Macrae has had a ridiculous fantasy record again the Tigers in the past posting an average of 114 points per game against them (including a 190 point game in 2018). 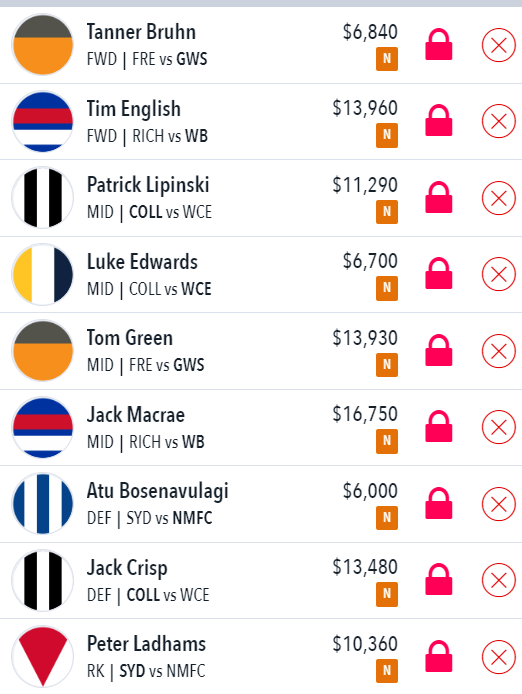