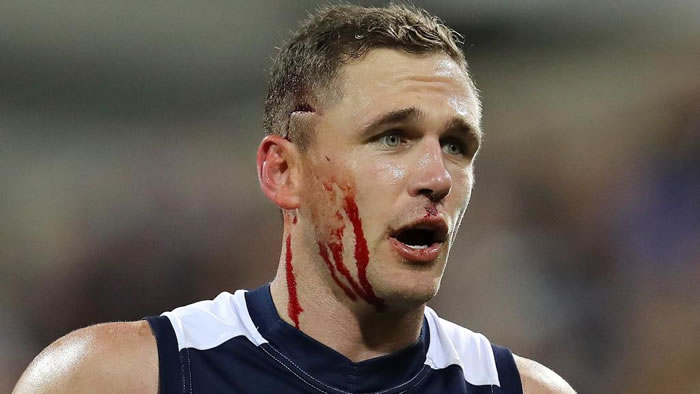 With the AFL finals down to the final four, the serious money is now up for grabs at Draftstars for Daily Fantasy AFL. It’s Preliminary Finals time, and with it, Draftstars are offering a guaranteed $50,000 prize pool for their feature contest for Geelong against Adelaide on Friday night (plus another $20,000 for their Beat Barry promo thanks very much!).

$50,000 is enough money for us to roll out of bed and throw a few line ups into the mix, so we thought we’d help out the strugglers with a look at a few key players for Friday night with our “Chalk, Chance and Chump” article!

A “chalk” player is a gem that will be hard to let through to the keeper at the price, so you’ll find him appear in a whole heap of line ups. A “chance” is someone who might not be as popular, but has a lot of potential that might be worth a punt, while a “chump” is a player we think is overpriced and not worth the time of day.

This exciting young Cat had a day out last week with a massive 120 points against Sydney with 24 possessions, ten marks and six tackles in his return to the side. If he can bring that sort of form again, then he’s great value at the $9,100 price tag and worthy of a cheeky chalk. He has been a little inconsistent, with some patchy games mid-season, but he’s proven to have a high ceiling and capable of big scores with two other 90+ point games this year. Even if he can just hit his average season score of 72.0 points, then he’ll be a valuable addition, however he may be highly-owned by those expecting a repeat of last week.

It’s going to be tough for the three Cat talls to take on big Sam Jacobs in the ruck, but if you’re looking to save a few dollars then consider Rhys Stanley. He’s roughly $3k cheaper than the three other choices and his scoring hasn’t been too bad really. We think he’s worth a chance! He didn’t exactly have a great game last week, but still picked up 84 points. With Blicavs largely in a tagging role, Stanley is getting more time in the ruck. With a ceiling in excess of 100 points and an average of 72.2 points, he’s far better priced than Blicavs or Smith in the Ruck position.

For those who have stuck with Captain Courageous throughout the finals, you have been burnt once too often, and it’s time to cut the bleeder loose. Joel Selwood is clearly hampered by an injury and no matter how many times we say to ourselves that his price is value, and that he’ll lift for a final, it’s time to accept that Selwood’s fantasy season is done. Send him off for fantasy surgery and be done with him! His last four weeks have barely produced 60 points each game, with a lot of handballs and very few tackles. His output is just not what it was, so don’t fall into the trap again this week. His price is “chump” change for a reason!

Who are your picks for the Chalk, Chance and Chump this week? Do you agree with our picks? Head to the forum to share your views with the DFR community!