AFL Fantasy Betting Tips for Round 10 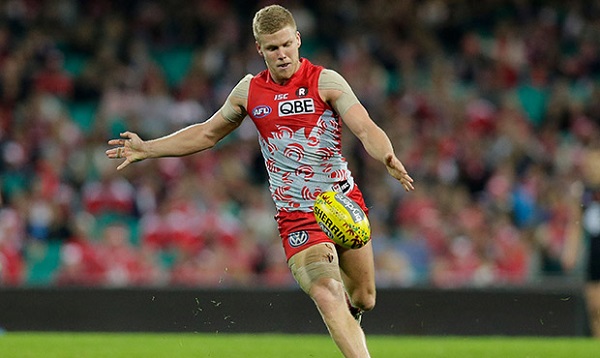 Another good week in fantasy bets as we hit on 3 out of 4 bets as Jake Lloyd, Tom Mitchell and Zach Merrett all had big games. We look forward now to Round 10 of the AFL season that starts this Thursday night with the Cats hosting the Power at Simmons Stadium.

Hill had a down weekend in Round 9 but still managed to pick up 18 possessions (12 of them kicks) and kick 2 goals. The Dockers still opt to give the hands to a running Hill at every opportunity which was exemplified by his massive 25 kick game in Round 8. He is in a group with the ‘Indigenous All-Stars’ this week which going on form he should be able to handle fairly easy. His only competition should be the running half back Jarrod Harbrow.

Hannebery has had a resurgence of form over the past few weeks with 115, 117 and a massive 159 over his last three games. He plays against the Hawks this weekend who are terribly undermanned and allowed seven Collingwood players to crack a ton last weekend including a monster 144 from Scott Pendlebury. Tough group but should have a massive chance, watch out for Pendlebury who plays the Lions this weekend.

One of the most underrated fantasy performers of the year and by far the best defender has been Taylor Adams. Has been consistently in the 110’s throughout the year and as mentioned above, comes up against Brisbane this week who have been the easiest team in the league to score against. He’ll be giving plenty of points in the handicap group but we think he could be on for a 130 this week.

Ablett has been in stellar form lately with a 162, 120 and 108 in his last three games. However, he comes up against Melbourne this weekend who have been a top five hardest team to score on all year and will also probably get the Bernie Vince tag. The Vince tag is one of the best in football at the moment and he has done good jobs on quality players in the last few weeks. Back Gaz’s under here.

EDIT: Gaz has been ruled out of this week's match through injury.