AFL Fantasy Betting Tips for Round 19 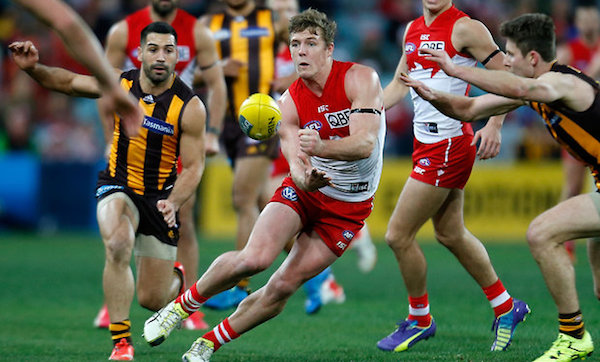 Fantasy markets can be found at all the major sports betting agencies including CrownBet, Sportsbet and Ladbrokes, so head to our Australian sports betting site reviews to find some great sign-up bonuses and more information. We’ll also be debuting our spread bet of the week this week from Pointsbet.

Simpson comes up against Swan Dan Hannebery in a H2H market this weekend as he takes on Geelong. While the Swans have been running riot over the last 10 or so weeks, Hannebery’s form has been down of late, scoring over 100 in just one of his last six games. Simpson is a known ball magnet across half back and loves playing that loose man role. Averages 99 on the season and has only dropped under that mark in two of his last six.

The in and under midfielder had a rough start to the season but has found some form of late in the fantasy scoring department, racking up over 95 points in four of his last six games. The Hawks have been the easiest team in the comp to score against throughout the year so far so we are picking him to have a big game here. Lachie Neale shouldn’t be too worrying coming up against the Giants but Luke Shuey could be an issue against the Lions.

If you haven’t noticed by now, we absolutely love Josh Kelly here at DFR. We back him in to get the over every other week and last round was the first time he hasn’t come through for us. It seems he does just enough every week to hit the over but not enough to raise his line, which is what we love. Playing the Dockers at home this week should be a massive bonus and we like him to get back to his scoring ways this week.

Hall was an elite scorer at the start of the year but has fallen away dramatically of late through losing time in the midfield. Finds himself at half forward or the wing for the majority of the game these days and seems to struggle even more when Ablett is in the side. Has three scores in the 70s in his last four games, we like his under here. Great spread bet here because while he has the ability to have an absolte stinker at around 40 points, his max is probably around the 100 mark so you can limit your losses.