AFL Fantasy Betting Tips for Round 8 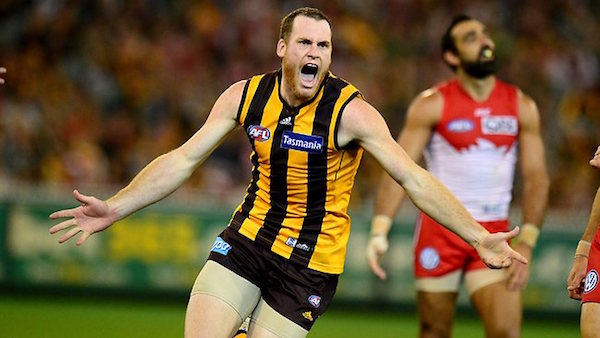 Another decent week for us last week saw us hit a $6 winner in Tom Rockliff to take out his points scoring group. We’ll hope to back it up this week with a few more winners as we give our AFL Fantasy Best Bets for Round 8 below.

While we are previewing the fantasy markets at CrownBet today, they can be found at most major betting agencies including Ladbrokes and Sportsbet. Head over to Before You Bet to see the best sign up bonuses and promotions for all of the Australian bookmakers.

The running machine racked up a massive 159 fantasy points last week as he had 30 kicks and just 7 handballs. His Fremantle teammate Lachie Neale publicly stated this week that whenever a player takes a mark for Fremantle they are looking to hand the ball off to Hill because of his ability to break lines at hit targets. In a fantasy group that consists of a lot of inconsistent players, the easy handball receives could mean a win here for Hill.

Roughead finally came to the party in 2017 last weekend with a score of 107 against the Demons. Everything is pointing in the right direction for Roughy now. Last week he played against the hardest team to score against in Melbourne and still scored over 100, this week he plays against the easiest team to score against in Brisbane, and on the highest scoring ground in the AFL in Launceston. The Hawks love playing in Launceston and Roughy should be in for a big day here.

The Saints-Blues game should be a high scoring one under the roof at Etihad. With Koby Stevens coming out of the St. Kilda side the Saints will be looking for more pressure players and Jack Steele should step up. Already averaging the 6th most tackles in the league with 7.6 per game, Steele only needs to rack up about 20 disposals to have a high scoring game with the amount of tackles he lays. Back him to top the 2nd group in the Saints-Blues game.

Mitchell vs Rockliff. This Saturday down at Launceston could decide who is the ultimate fantasy player of the year as Tom Mitchell and Tom Rockliff square off. Both posted at $2.50 to win the group, they are the only two chances but I give the slight edge to Mitchell for the simple fact that I think the Hawks should win this game comfortably. They like playing in Launceston and still no O’Meara means more points for Mitchell.