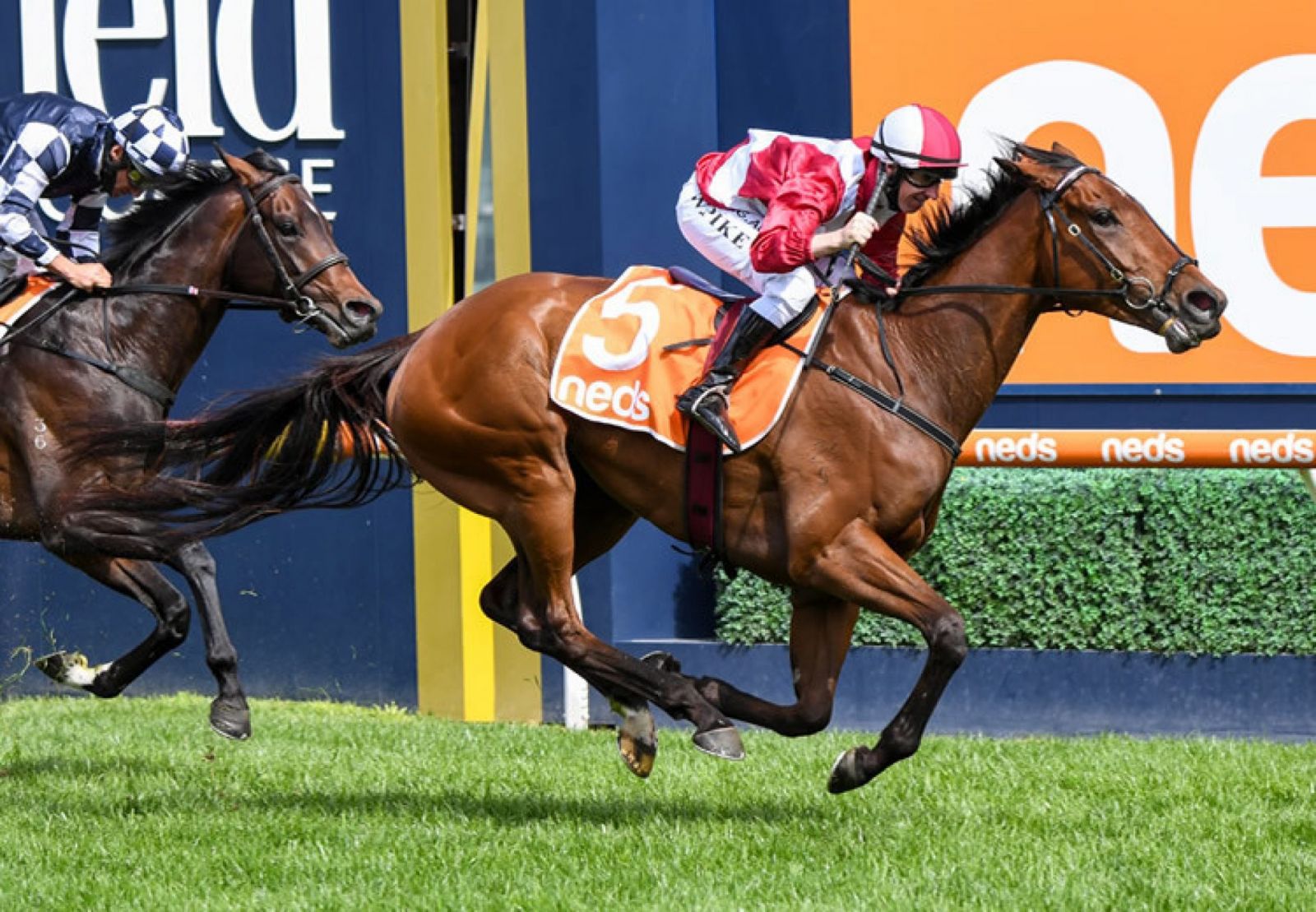 With the pace of the past few months it has been too much of a whirlwind to acknowledge the big winners on Daily Fantasy sites. But with the footy finals in full swing and the action on the race track heating up let’s recap the big winners from the past weekend.

The Spring racing carnival is now in full swing, SportChamps have rolled out the huge tournaments and the site was hummering with mega pools.

SportChamps dangled the carrot on offering Russian Camelot $2.50 odds throughout their tournaments but unfortunately Arcadia Queen was simply too good in the Neds Stakes. SportChamps reported that numerous players invested their whole bankroll which knocked out many. 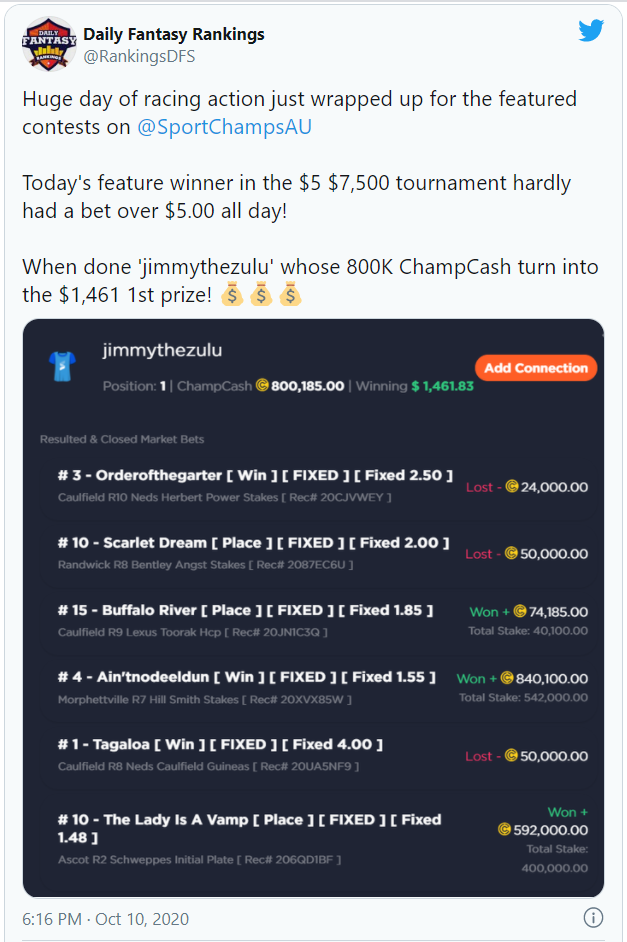 Another featured tournament the $50 entry $10,000 Metro which was taken out by ‘Snicster’ who set up his 250,000+ SportChamp balance by hitting big on Fiesta in the Northwood Plume Stakes. Then sealed the top position by backing in Arcadia Queen in the Neds Stakes. $2,047.50 went into the account of ‘Snicster’.

Big moves were also made in the $50,000 Spring Carnival tournament where the current leader ‘Dansim’ has built an impressive ChampCash bankroll of 500,000. Hitting on an exacta at Randwick and a big collect on Odeum in the Caulfield Guineas. Currently 13,000 ChampCash on the leaderboard is a $250 payout! Long way to go though!

Two big games of AFL with Richmond and Geelong booking their spots in the Preliminary finals with impressive wins. A pair of $75,000 contests were available from Draftstars and on Friday Night it was the 2019 Live Final Belt winner ‘asanque’ who held out number 1 ranked DFR member ‘RWhelan09’ to take out the 1st prize. There was a late stat adjustment for asanque to climb to the top of the leaderboard! 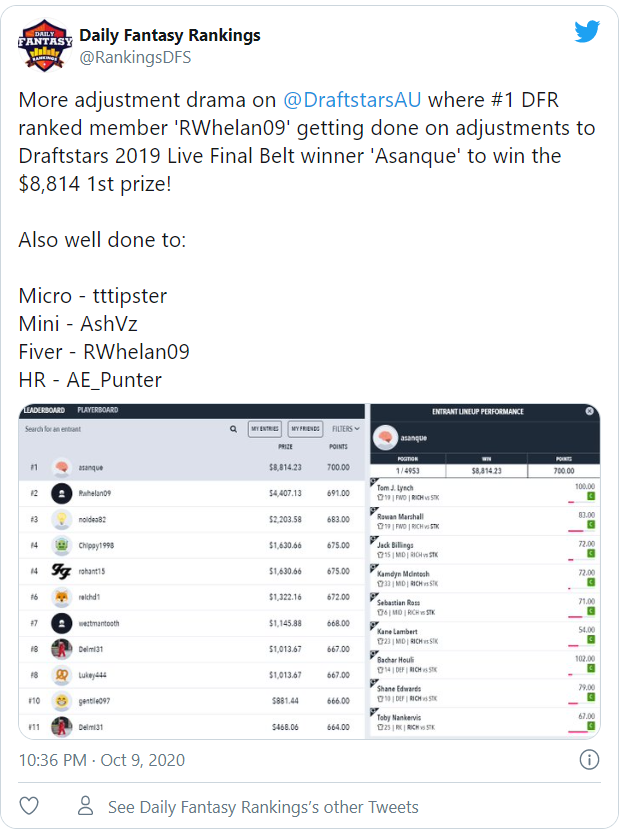 On Saturday night, you certainly needed Geelong players in your lineups as the Cats did a big number on the Pies. For ‘rohant15’s’ team, only Jamie Elliot made his side from the Pies as he took out the $8,814 prize. The 2019 live final entrant earnt his highest career cash! 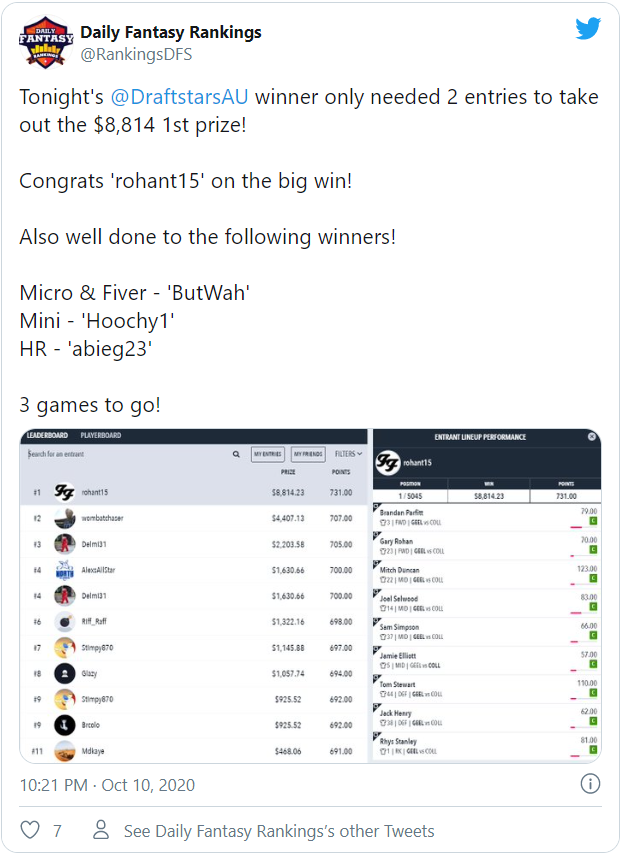 Also a shout out to the Single Bullet winner ‘ScrappyJay’ who took out the $25,000 Draftstars Week 5 NFL contest! 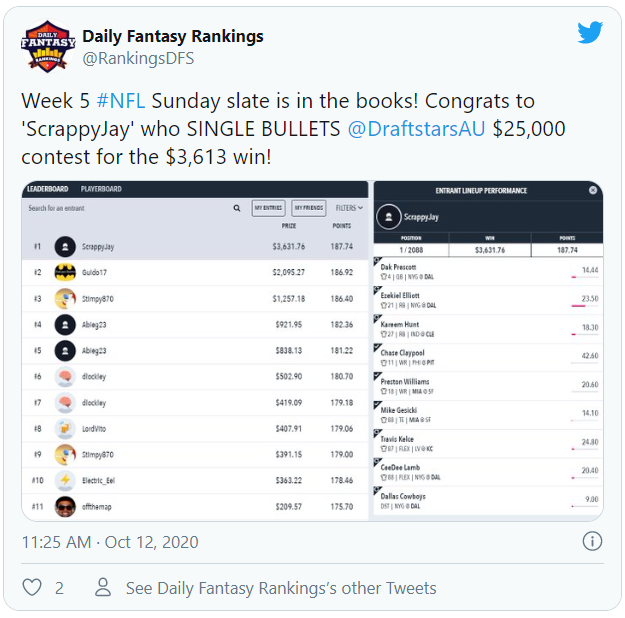 There have been some significant cashes from Australian’s in the past week with ‘Fatebender’, 'WayneCarey' and ‘jayk123’ winning huge cashes on the DraftKings platform. 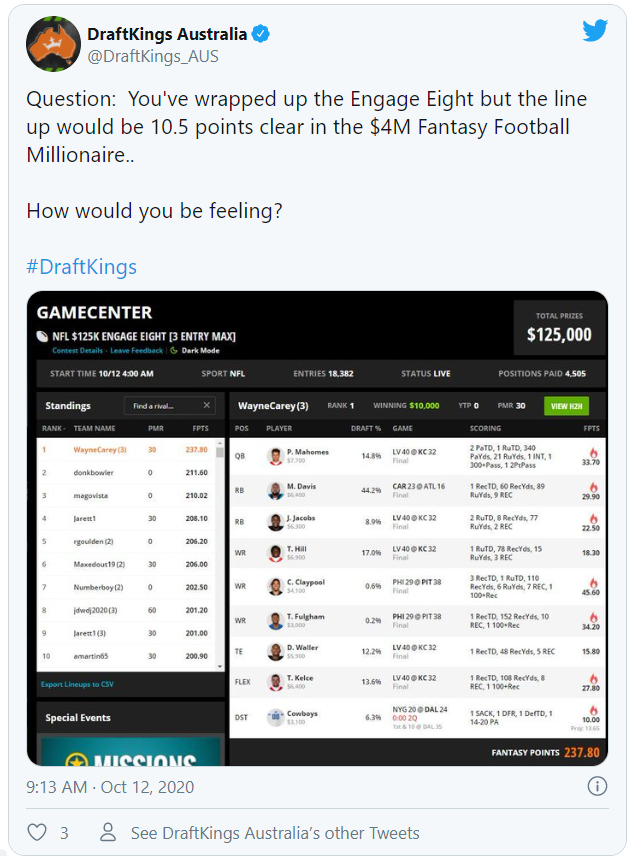 Good luck to everyone for this upcoming weekend! Caulfield Cup into Prelims is a sports lover's dream!