Another great week in Australian sport and racing was highlighted by Day 1 of The Championships along with a great round of AFL action and some monster matchups as the NBA season winds down! We break down some of the major DFS tournaments of the past week below.

One of the biggest tournamnets of the week at any site was the $20,000 NBA Super Contest at PlayON! Scheduled for last Wednesday which boasted a massive 13 game NBA slate, the PlayON super contest attracted 153 entries at US$100 entry fee! After a thrilling day of NBA, it was OKC star Russel Westbrook who topped the charts with a massive 72.2 points, helping ‘danmonkey’ take top spot with a whopping 321.6 points.

The win made danmonkey US$5000 richer and not only did he pick up the top prize, he also finished in 6th place, collecting another US$700. Not a bad day. Remember, there are plenty of Super Contests still to come at PlayON, and all feature free qualifier tournaments in the lead up, so make sure you get around PlayON in the coming months! 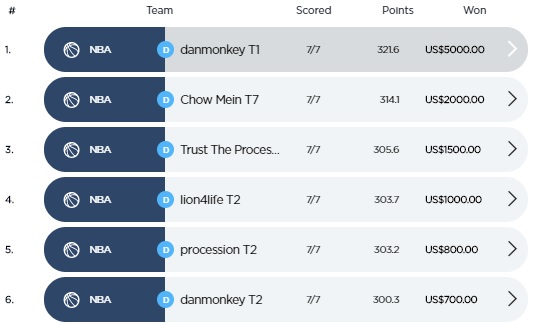 Both the $100 and $50 tournaments were extremely popular at SportChamps for Day 1 of The Championships from Randwick on Saturday. The $50 buy in tournament attracted 32 players and offered a prize pool of $2400. While Deatac has been dominating the SportChamps seen recently, it was someone elses turn on Saturday, as ‘BrutalDeluxe’ rained supreme picking up almost $700 for the win.

The $100 tournament attracted 35 players and offered a massive $6400 prize pool. BrutalDeluxe was once again amongst the top players, claiming 7th place and a further $250 but it was DFR veteran ‘Cfrance172’ who claimed top spot, picking up almost $1,800 and improving to 47th on the DFR leader board!

Just $1,000 was won in the major tournament of the weekend at TopBetta, as the four day championships competition kicked off. Balances will be rolled over for the next three weeks, making the $200 entry tournament a massive one, with $10,000 guaranteed already on the line. 51 players have already thrown their hat in the mix with 11 rebuys to date.

The clubhouse leader at the moment and the winner of the $1,000 day one prize pool is ‘glenfitzgerald’ who placed a fantastic $18,150 bet on Luvaluva to win the final race of the day at Randwick and scoop the top prize. He’ll also take a cool $30,000 chip lead into day two next weekend!

The $50,000 AFL Saturday contest at Draftstars was once again the biggest tournament of the week in Australian DFS. At just $15 per entry, the tournament is great value if you can manage to jag a winning team, which is exactly what top ranked DFR members ‘Broady4_’ and ‘chriseddy999’ did on Saturday.

With completely different teams, Broady4_ and chriseddy999 were able to accumulate a whopping 929 points on the day to both collect the massive $4,375 first prize. After that, however, it was all the ‘chriseddy999’ show. Chris went on to have the next three highest scores, picking up close to another $4,500 and also had another 11 teams in the top 50 to make for one of the most dominant Draftstars displays we’ve ever seen! 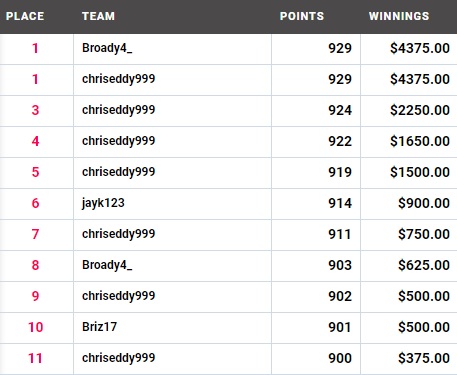