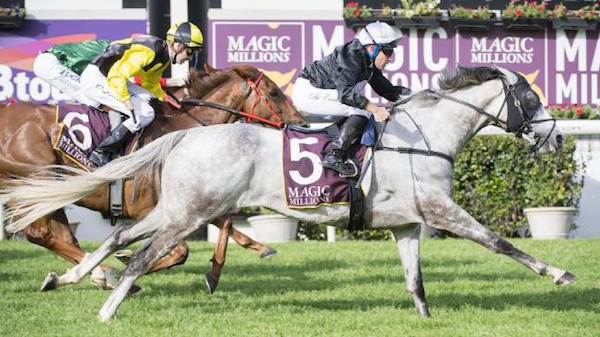 Another big weekend in daily fantasy and tournament betting competitions was headlined by the running of the Kingston Town Classic and some monster prize pools in the staple American sports. With the Big Bash League set to kick off next week, we’ll get even more nightly prize pools but for now we’ll recap all of the action from the week that was in DFS.

Another week, another great Saturday Metro Mayhem tournament hosted by TopBetta. The tournament attracted 32 players plus another 24 rebuys, offering a total prize pool of $5,600. Highlighted by a $44,000 win on Hopfgarten to win Race 8 at Doomben, it was TopBetta veteran Deatac who took out top honours, finishing the day with over $60,000 in BettaBucks.

Deatac cemented his place inside the top ten in the Daily Fantasy Rankings, currently ranked 8th with a whopping 112 total wins.

The NBA continued to dominate the Moneyball scene over the last week, with the Thursday monster $25,000 tournament offering the biggest prize pool of the week. Some huge scored from the likes of DeMarcus Cousins and Kevin Durant were enough to propel JayC2009 over the line, who cleared the coveted 400 mark, racking up 406.2 points with his winning team.

JayC2009 also had another six teams in inside the top 30 to make for a dominant day while Stimpy870, who picked up second and third place, also had a total of nine teams in the top 30. Well done to the multiple entry players today! 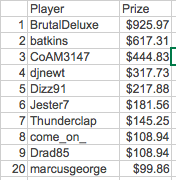 Friday nights at SportChamps continue to be the big draw card throughout the week of racing, with this week’s Moonee Valley tournament offering a $4,150 prize pool. After a great day of betting it was BrutalDeluxe who took out the top prize of just over $900.

SportChamps veteran and DFR member djnewt was amongst the top placings, adding to his impressive winnings tally which now tops $72,000.

Draftstars also offered a massive $25,000 prize pool for the Thursday NBA slate, by far their biggest offering of the week. In a low scoring day for Draftstars punters, it was a score of just 369.50 that got the job done for offdaheezey. Some impressive performances by LeBron James, Kevin Durant and DeMarcus Cousins carried the team over the line, picking up $2,500 for the win.

It was a great day from perrinj, who claimed five teams inside the top 20 while some usual suspects in the likes of Jayk123 and Davidian were also amonst the top of the leaderboard.