Another weekend of major DFS tournaments is in the books with a usual array of racing, NBA, Big Bash and AFLW contests held across all the major Australian DFS platforms.

SportChamps continued to crank out racing tournaments all weekend headline by their Saturday Metro Tournaments. This weekend saw a massive $10K guaranteed contest with an entry fee of $50. The first place dividend of $2,093 was taken down by Igottrix, while Bradg1687 finished in second to net $1,234.

TopBetta held racing contests throughout the weekend across all codes, headlined as usual by their Saturday Metro Gallops events featuring $2,000 and $1,000 Saturday Gallops events. The $2,000 contest was taken down by the 27th DFR ranked member foley1 who collected $1,260. The $1,000 competition was won by NAVEED taking home the $720 first place prize.

There were three Big Bash matches on Draftstars over the weekend as we draw just one week away from the grand final and the first ever Australian DFS live final! Saturday had a double header with the curtain raiser BBL $5,000+ Strikers v Scorchers. There was a three way tie in this contest between Davidian, kingyfc and jamesmcgee46 who each took home $500. 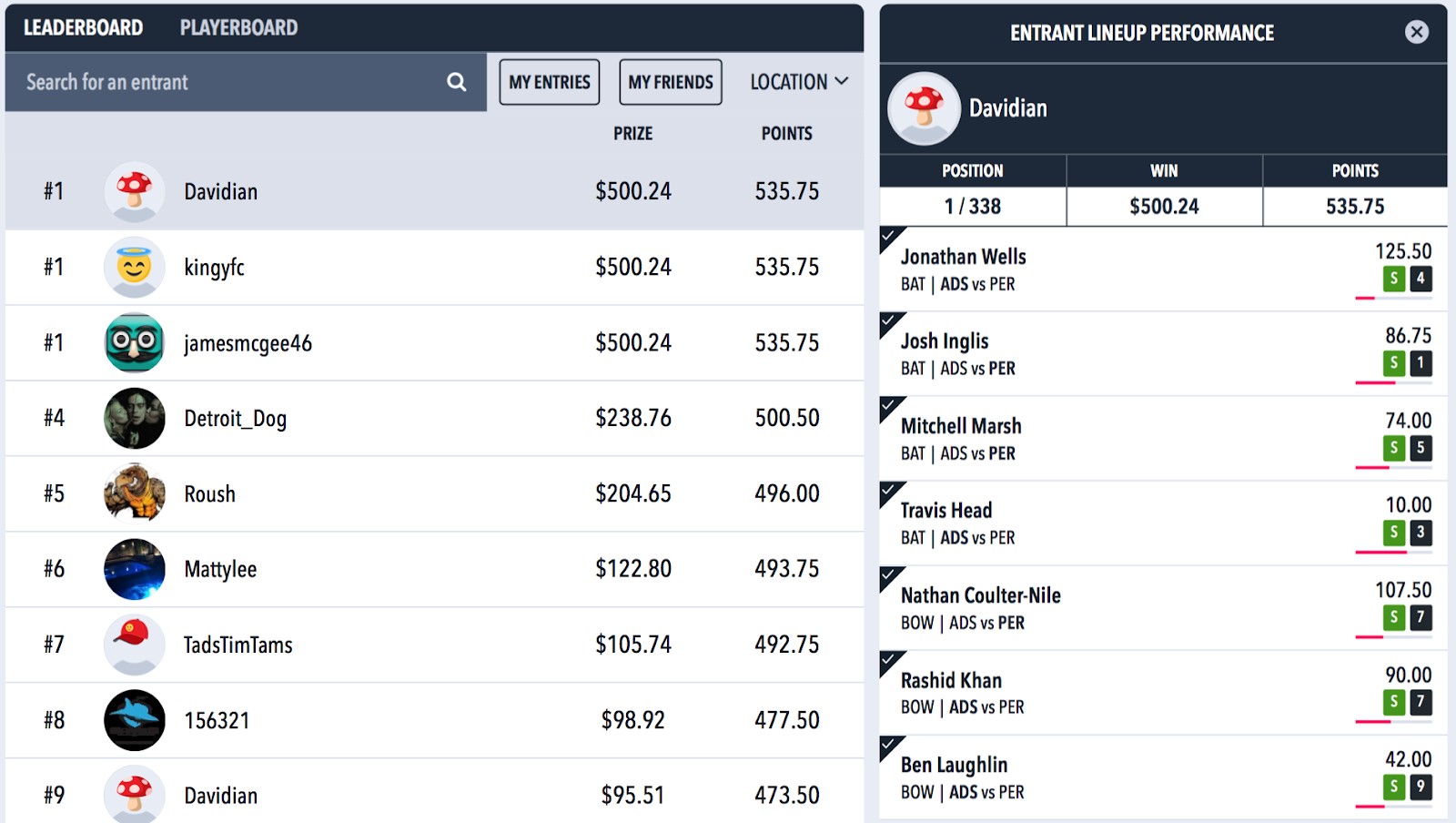 The main event for Saturday was BBL $10,000+ Thunder v Hurricanes, which was won by the 35th ranked DFR member Travinator who collected the $976 first place prize. 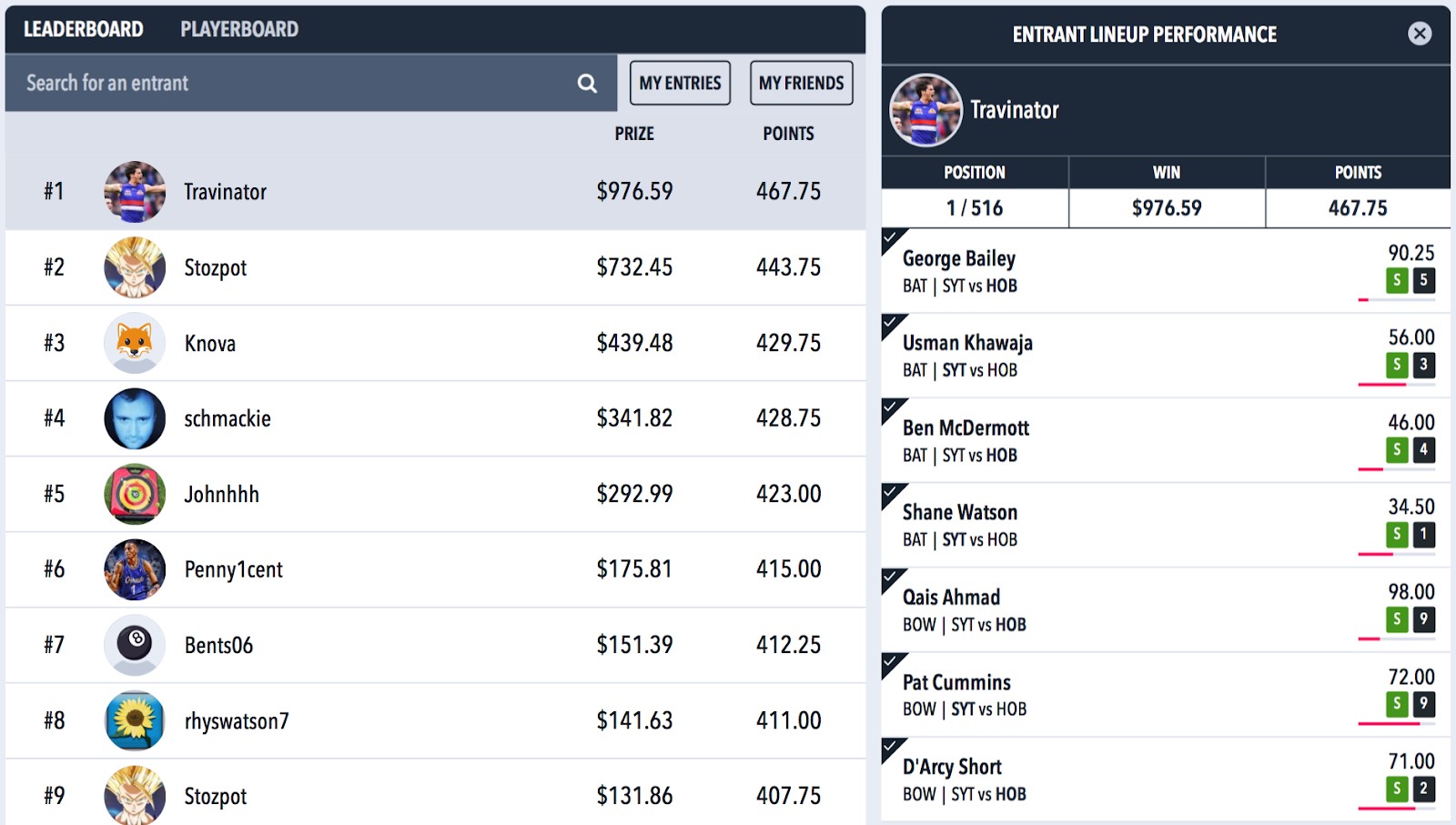 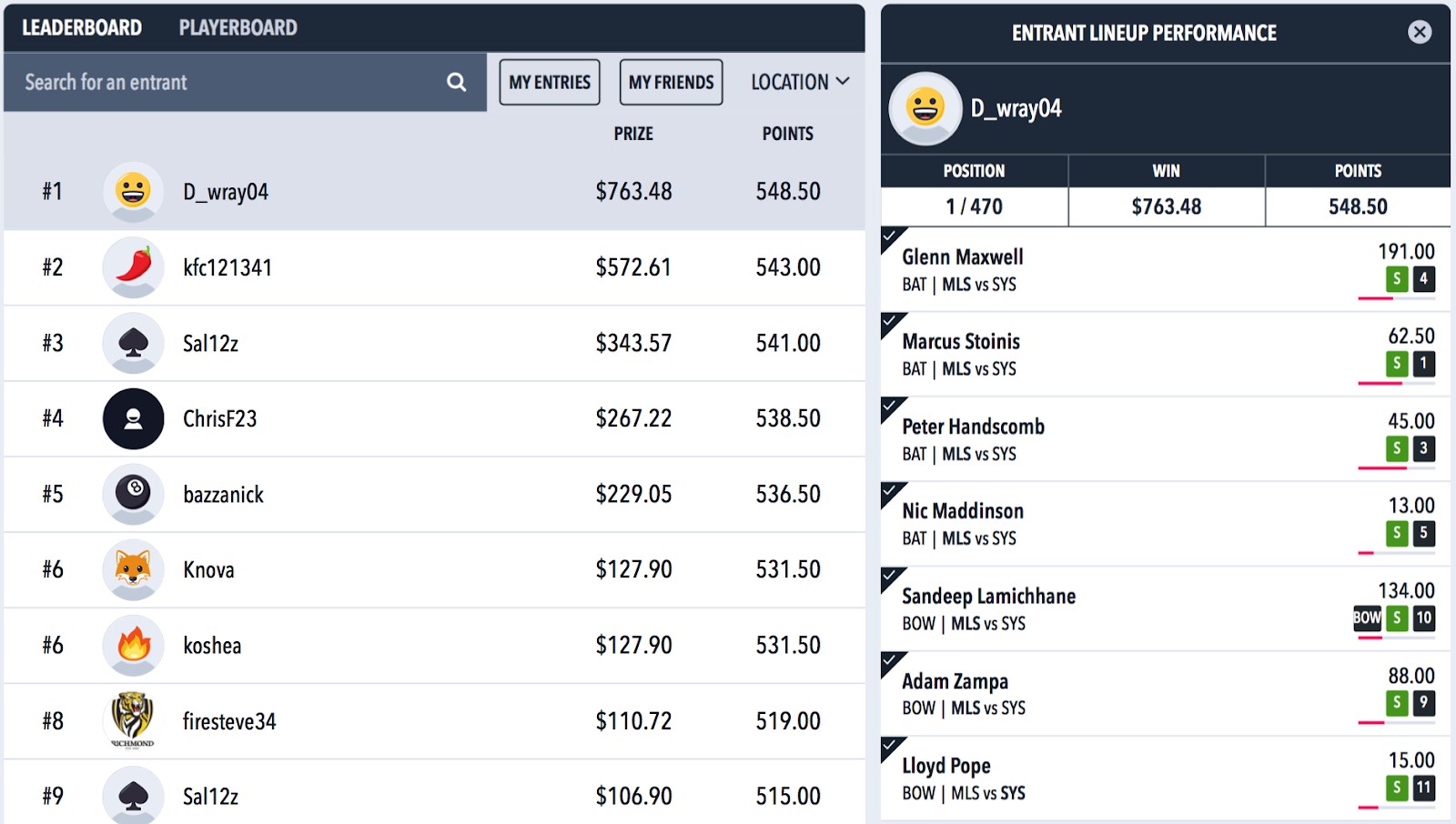 AFLW rolled on with Draftstars offering $5K contests on both Saturday and Sunday. The Saturday all day contest was won by madbomber76 who took home $682 and was able to hold off a dominant performance by hedge who had 7 teams finish in the top ten to collect over $1,573 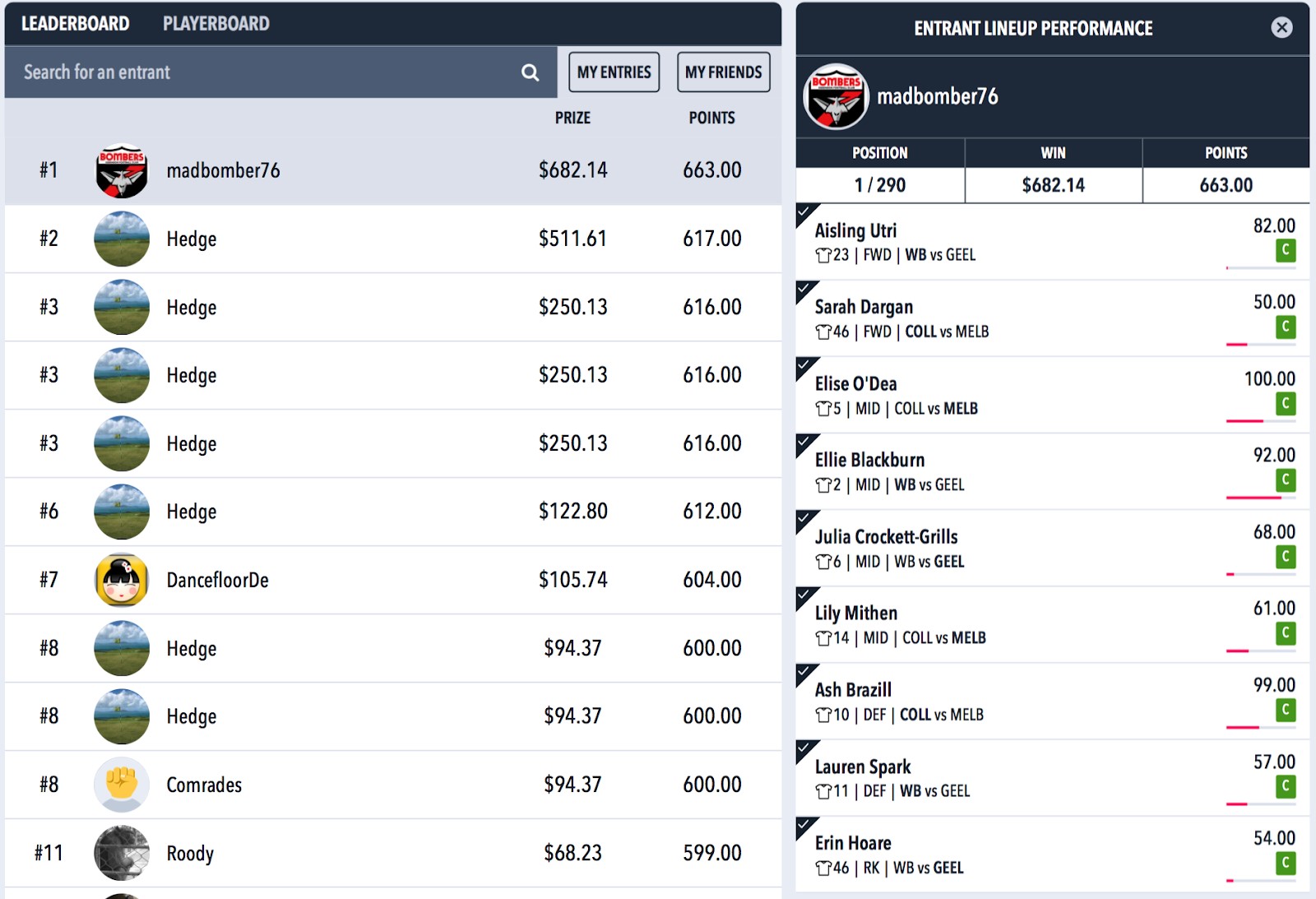 On Sunday it was Twocupscino who finished on top of the leaderboard and pocketed $682. 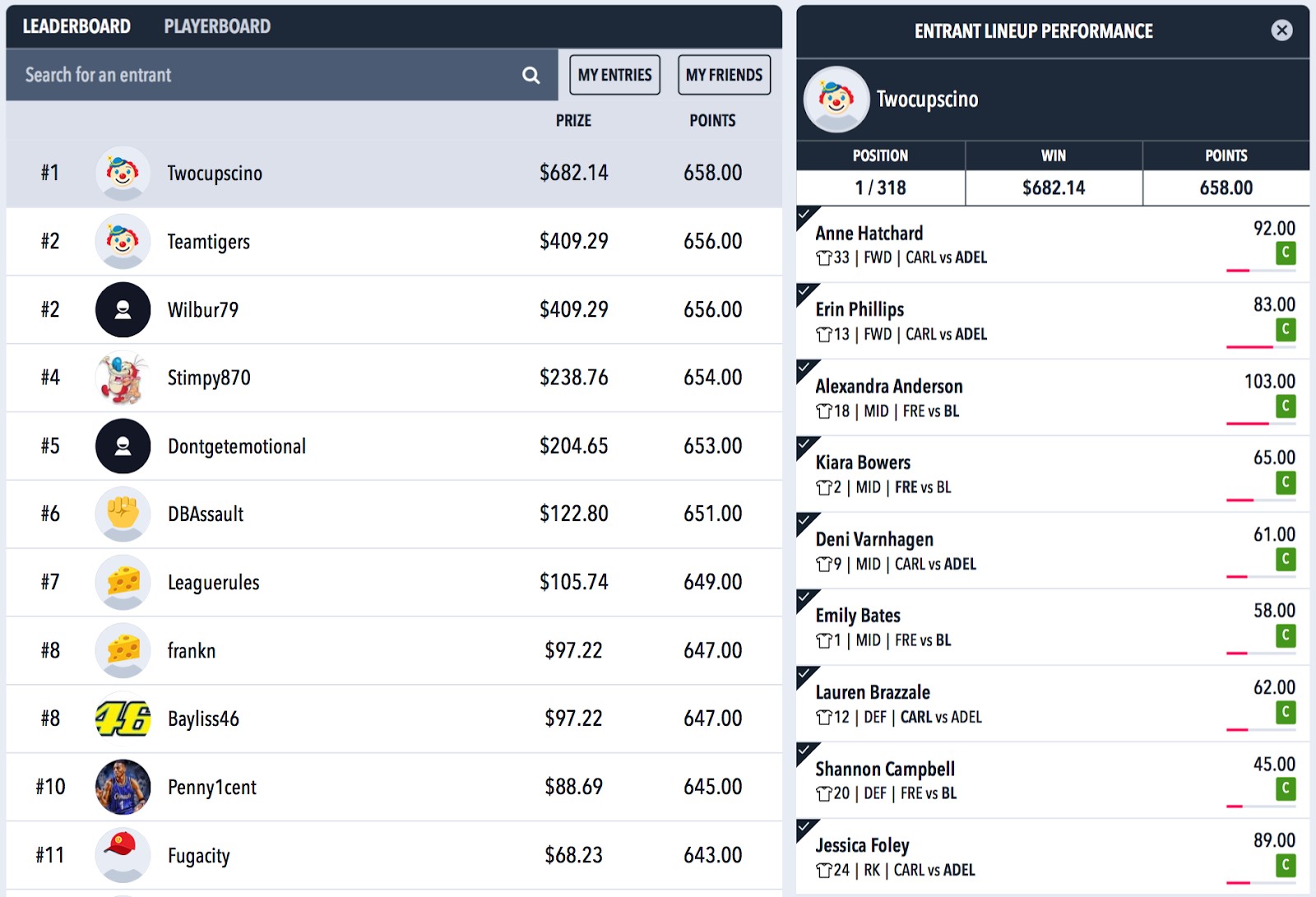 There were also the two major NBA $15K contests on Saturday and Sunday. On Satruday the usual suspects dominated again with the number 1 ranked DFR member lion4life finishing with 4 teams inside the top ten, including first and second, to win over $2,550. The number 6th ranked member Stimpy870 wasn't far behind with two teams finished in equal 6th. 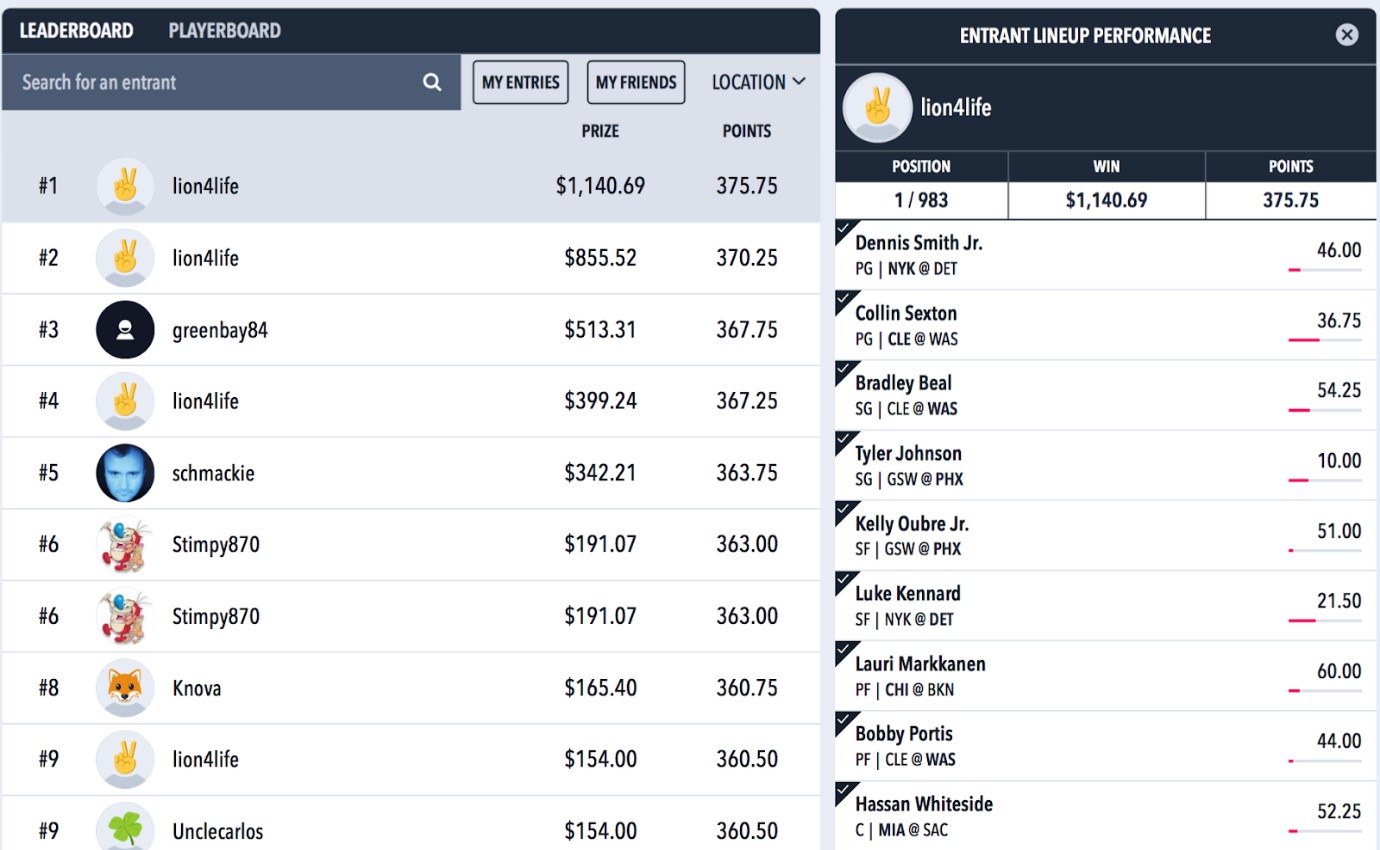 On Sunday the 11th ranked DFR member chuangsta got the win and $1,140. 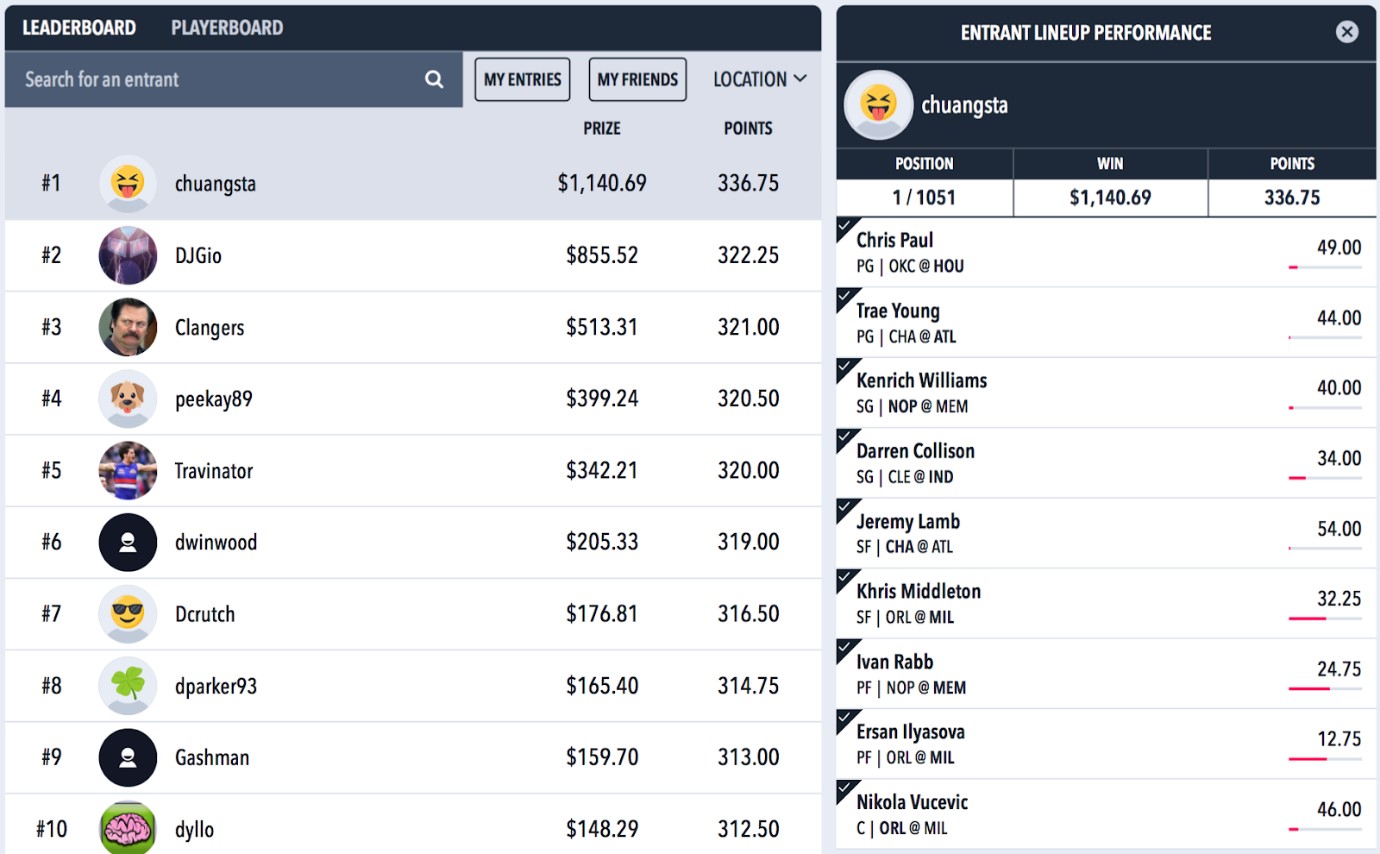 Moneyball had two major NBA GPP’s on Saturday and Sunday with prize pools of over $6K. Saturday it was Will Benjamin finishing in first and pocketing $800.

On Sunday dpopp was on top of the podium to win the first place prize of $800.