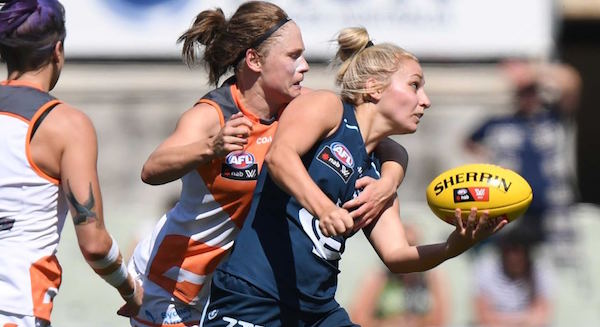 Last weekend saw the summers Big Bash League wrap up as well as the NFL with the Super Bowl being played. There’s no break in the sporting world though as the Winter Olympics got underway this weekend and the AFLW continued this weekend as well as the international T20 Tri-Series. We take a look at the results from some of the major sport and racing DFS contests over the past week below.

The Saturday Metro Mayhem was once again the biggest earner of the week for TopBetta. It attracted 28 contestants and a further 36 rebuys to offer a total prize-pool of a whopping $6,400. After a great days betting, the contest was still up for grabs leading into the last race of the day, Race 10 at Doomben.

Three players all rebought heading into the last race and put all of their $5,000 on the eventual winner, Hanwritten, at $10. The $50,000 collect was only enough to share in 2nd place though, as ‘ferocity’ claimed the win by backing Hanwritten as well but having some extra cash saved for a rainy day. Well done to ferocity, who took out the top prize with just one rebuy for the day.

The $100 Saturday racing tournament at SportChamps kicked the weekend off in style, bringing in 38 contestants and a further 24 rebuys to offer a total prize-pool of $6,200. It seems like this man’s name is brought up every week when discussing SportChamps results, but it was once again Deatac who took out top honours, taking out just over $1,600 and adding to his impressive DFR points tally which currently sees him ranked 7th.

The $50 Sunday tournament was also a great event at SportChamps over the weekend. 31 players threw their hat in the ring, all playing for a total prize-pool of $2,750. Some familiar DFR names were amongst the top players of the day in Mr_Brightside, jesse86 and BrutalDeluxe, but in the end it was Liddyp who took out the top prize of just over $790 after a great day of betting.

The NBA Friday tournament was the highlight of the week at Moneyball, offering a total prize-pool of $12,900 to the 993 contestants that entered. Kemba Walker, Jusuf Nurkic and Otto Porter were all under 12% owned and were all massive on the day, especially for eventual winner Jim88888. Not only did Jim take out first place with a score of 372, he entered a team that was exactly the same that shared in the top prize winnings, giving him a total of over $2,400 in winnings for the day

The AFLW competition continued this weekend in style as Draftstars offered a guaranteed $5,000 for the Friday night game between GWS and Carlton. Some of the names might still be a bit unfamiliar, but it didn’t stop Draftstars veteran Davidian from compiling a monster 582 points to take out the top prize.

Led by the likes of Alicia Eva, Brianna Davey and Sarah Hosking, who compiled 97 points through her 12 disposals and ridiculous 16 tackles, Davidian was able to collect the major prize of $750. 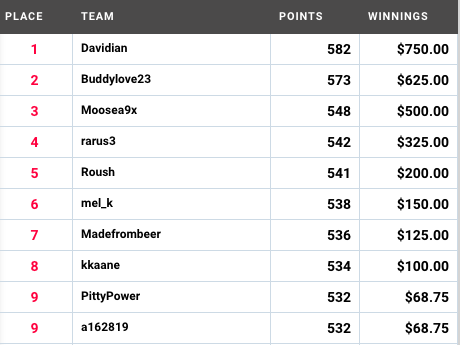