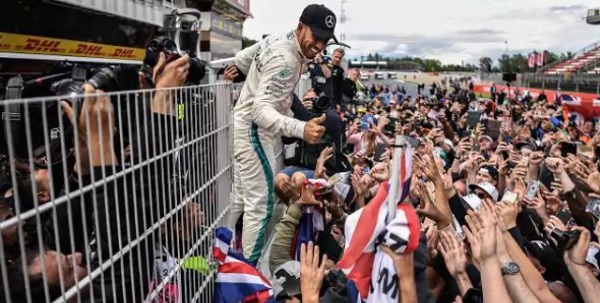 Another great weekend in daily fantasy sports and racing in Australia was headlined by a big round in the AFL, the Formula 1 Spanish Grand Prix and Doomben 10,000 day on Saturday. We recap all of the major tournaments across the weekend below.

The TopBetta Saturday Metro Mayhem was once again a big one this weekend. It revolved around the Doomben, Scone, Caulfield and Morphettville race meets and attracted 21 players and a further 42 rebuys for a massive $6,300 prize-pool!

Some more familiar names in Deatac, lewster and foley1 were amongst the top of the leader board in a great day of betting.

The Friday night racing tournament was a popular one again at SportChamps this weekend, attracting 25 players competing for a $2,550 prize-pool. Continuing on from his fantastic form last weekend where he picked up the Friday night contest, it was once again C.C.DeVille who collected the top prize this week, turning his $50 entry into a cool $780 after a great night of betting.

The major tournament on Saturday revolved around the Doomben meet only, and offered a monster prize pool of $4,600 for the 32 competitors. Familiar names in foley1, Deatac ad Baggins were amongst the top of the leader board but in the end,  it was lewster who picked up the top prize of just over $1,300 for his efforts. Well done to the winners at SportChamps this weekend.

After a fantastic Formula 1 debut at PlayON in the Azerbaijan GP a few weeks ago, the motor racing tournaments were once again on offer this weekend as the Spanish Grand Prix took centre stage. There were a bunch of great tournaments revolving around the race and qualifiers, with the major competition of the weekend offering a great $2,000 prize pool and attracting 80 players.

As he did two weekend’s ago for the Azerbaijan GP, it was once again ‘golfclayton’ who picked up top honours in the major $2,000 tournament, collecting $560 for the win and a further $340 after also having a team place in third place. ‘golfclayton’ is proving the man to beat in the F1 tournaments at PlayON, so make sure you create an account to try to take him down in the Monaco GP in a few weeks time.

Shout out to DFR member ‘rexel9’ who had a total of six teams finish in the top ten of the $5 and $20 qualifier and race tournaments, picking up almost $1000 in winnings in total!

The Saturday AFL tournament was another good one at PlayON, offering a $1,500 prize pool and attracting 57 teams. With a big six game slate to choose from on Saturday it ensured there was plenty of unique teams, but it didn’t stop PlayON veteran FunFun555 from absolutely cleaning house on the day. FunFun555 picked up first, second and third in the tournament to win $930 of the $1,500 prize-pool and stamp his authority on the AFL PlayON scene.

Another Saturday, another $50,000 to give away at Draftstars in the AFL. This weekend’s tournament attracted a whopping 3425 players and revolved around the six game slate. There were some great unique picks on the day as the likes of James Harmes scored 131 points at just 1.64% ownership and forgotten fantasy star Tom Rockliff burst back onto the scene with a 127. 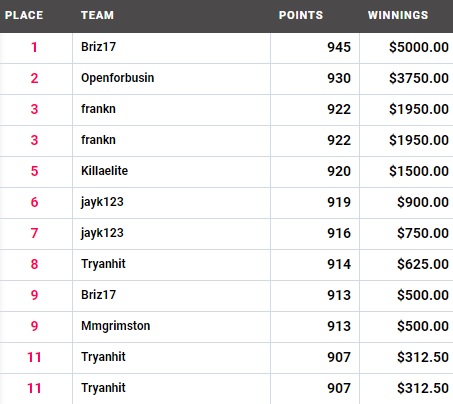