Another great weekend, particularly in Australian racing as Day 2 of The Championships was ran from Randwick! The AFL season also continued as well as the NBA Playoffs getting underway to make for an exciting week in the daily fantasy community. We take a look at the key tournaments of the last week below!

In the major Championships tournament at TopBetta, players carried their Day 1 balance into Day 2 to compete for a monster $20,000 guaranteed prize-pool! The leader after Day 1 was glenfitzgerald and while he was able to pick up a cool $4,500 for second place, he wasn’t able to hold on for the win as ‘reecew’ had a day to remember.

Day 2 of The Championships was also the headline at SportChamps as well Saturday, as they offered a massive $7,400 tournament for Randwick only. 49 players threw their hat in the ring for the massive prize-pool, all kicking in the $100 entry fee.

After a great day of betting that saw some DFR members in the likes of cleanblinds, Deatac and foley1 finish near the top of the leader board, it was ‘imdgame’ who came up trumps, collecting a massive $2,400 for the win!

Rexel9 backed it up in the $1000 guaranteed Sunday tournament, picking up the top spot once again for $370 and also picking up another team in second place for a further $220. Well done on a great weekend rexel9!

Another monster week in the AFL at Draftstars was highlighted by the $50,000 Saturday tournament. Five games on the slate meant plenty of different options and for eventual winner ‘Thedred’ it was GWS duo Tim Taranto and Nick Haynes who were the difference. At just 18% and 2% owned respectively, the pair scored 240 points for Thedred to help him accumulate a massive winning score of 910 points on the day.

As expected, the best of the DFR crew were jayk123, Tryanhit, peekay89 and chriseddy999, who all finished with multiple teams inside the top 50. 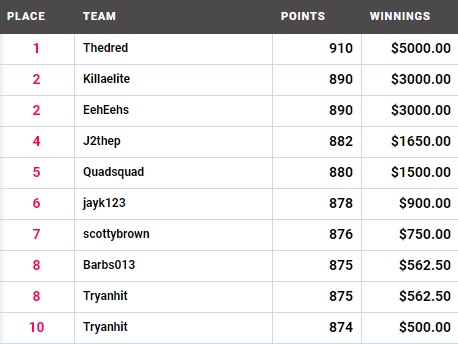