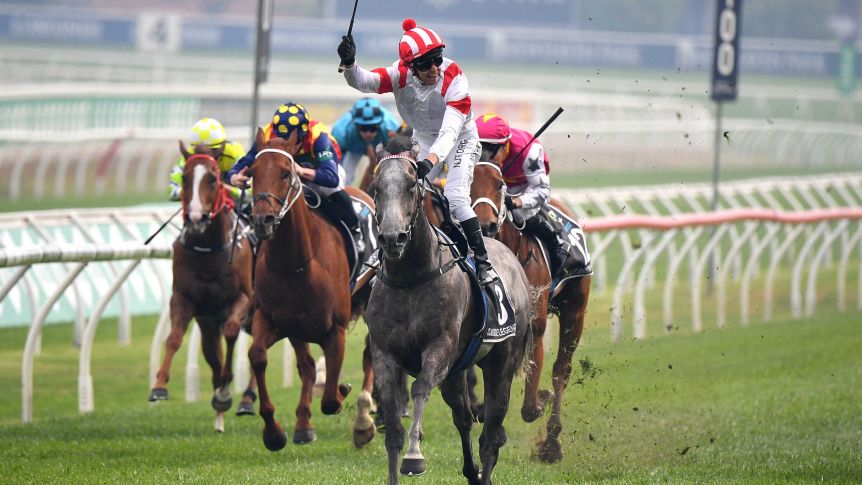 It was another massive weekend of action with the Everest and Caulfield Cup along with finals action in the footy. The pools were pumping and stars on the track and the field showed out the biggest stage. Let’s congratulate the big winners over the weekend!

The Spring racing carnival is now in full swing, SportChamps have rolled out the huge tournaments and the site has a large number of contests available for punters.

The featured tournament was the $5 Entry $10,000 pool attracting 834 entries along with 742 rebuys. Congrats to ‘Poppy71’ grinded to a 45K Champcash haul until it went on a 2 leg multi with the Everest Winner ‘Classique Legend’ and Caulfield Cup winner ‘Very Elleegent’. That collect and holding off ‘Cfrance172’ led to a $1,769 first prize. 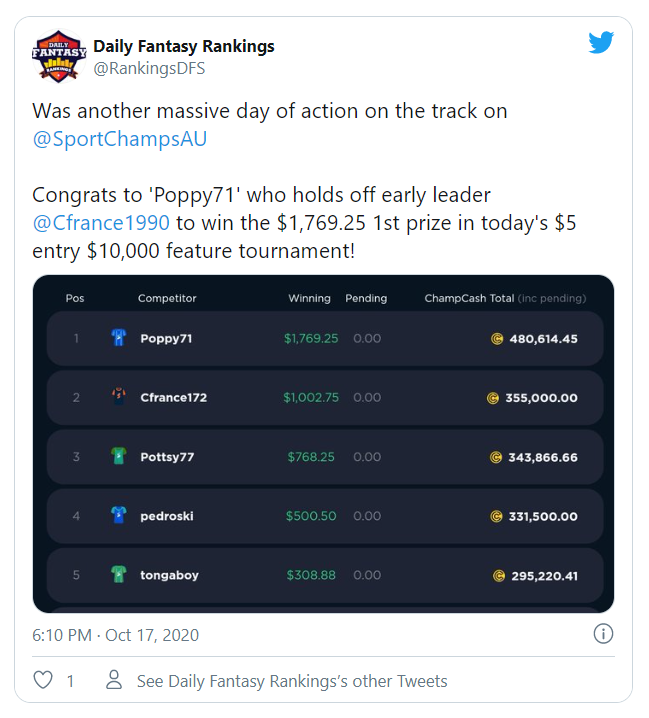 It wasn’t all so bad for ‘CFrance172’ who let DFR socials know that he was in the thick of the action in the high roller end of town. 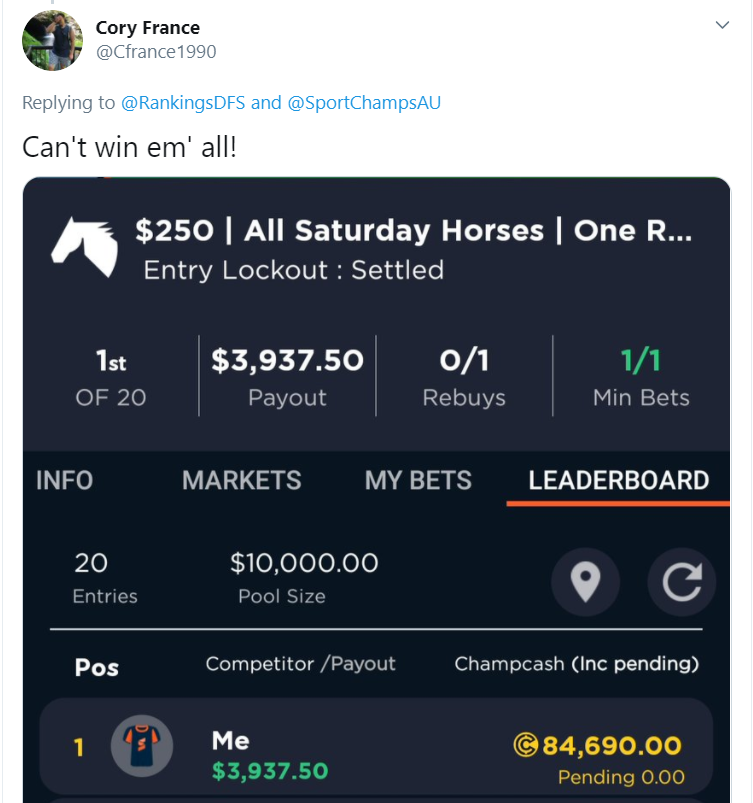 Another featured tournament the $50 entry $10,000 Caulfield and Randwick was taken out by ‘SkyLight’ who set up his/her 124,000+ SportChamp balance placing only 4 bets. A nice collect on the $8 chance in Graff and double ups on place bets. This was all that required to take home the $2,016 1st prize! 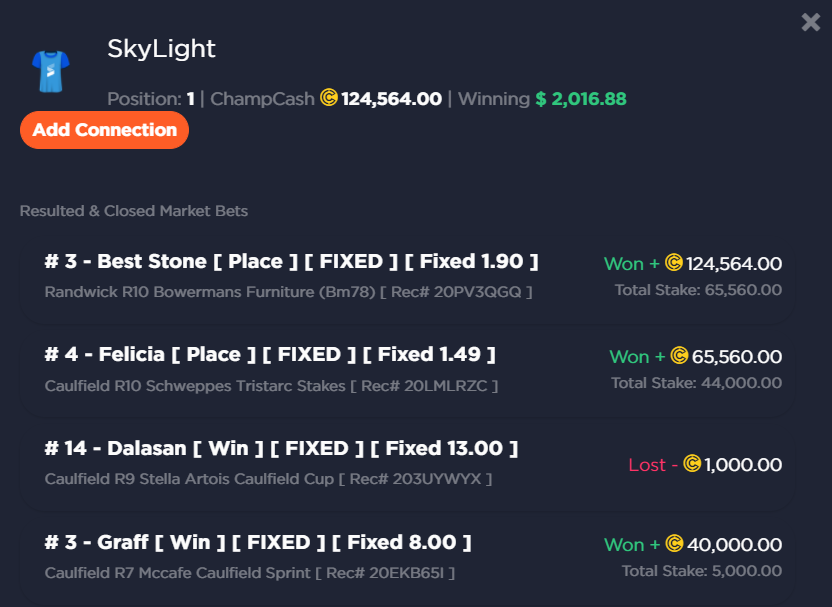 For those who were interested in the $200,000 Caulfield Cup Wishlist, three players were able to select 4 out of the 8 selections required to have a shot at the jackpot. Wonder what SportChamps will post for the Cox Plate this Saturday?

Two big games of AFL with the Prelim finals providing in the end two underdog wins. It started on Friday with the Tigers overcoming a stubborn Power outfit. The question on everyone’s minds come late Friday night was the amount of entries from DFR #3 ranked member ‘Stimpy870’ made into the top 10! 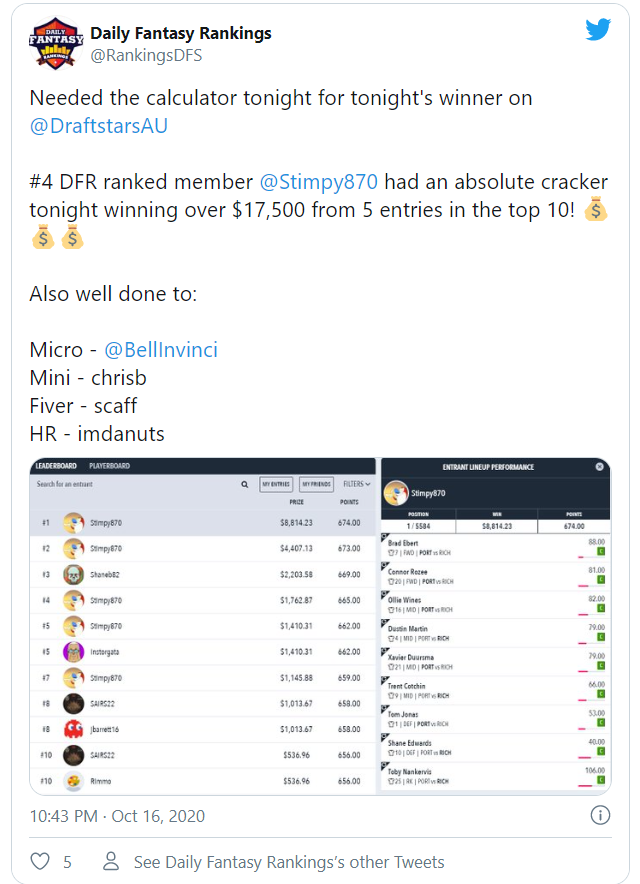 On Saturday night, Geelong did another number on Brisbane as the number #1 ranked DFR member 'RWhelan09’ took out another AFL slate, we have lost count on how many the “King” has taken out! 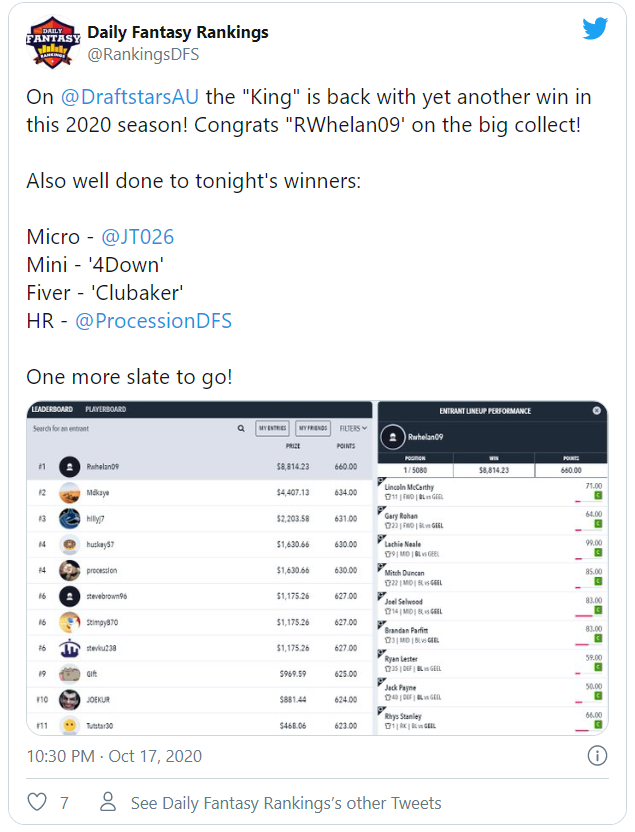 In the NFL Week 6 Sunday slate, DFR member ‘LordVito’ took out the $25.000 Draftstars contest by filling both 1st and 2nd position! 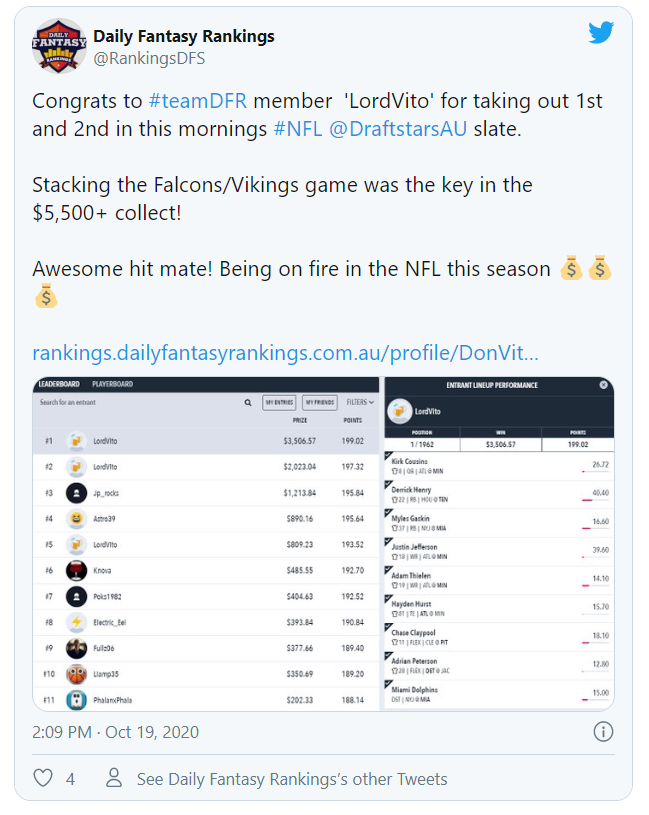 Good luck to everyone for this upcoming weekend! Draftstars and DraftKings have posted their AFL offering and we look forward to what SportChamps will be offering for the Cox Plate!