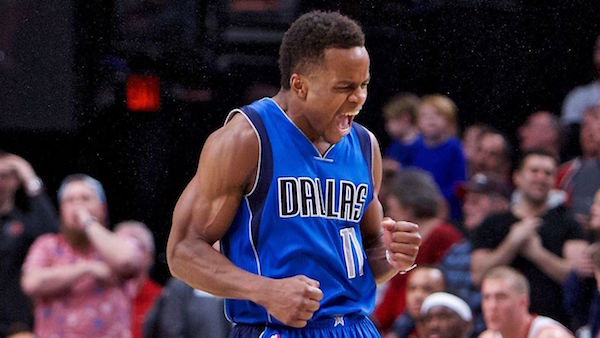 The Australian daily fantasy scene has the feeling of a calm before the storm at the moment as the 2017-18 Big Bash League is about to kick off and with it some massive prize pools on the way. However, there’s still plenty happening at the moment with the NBA in full swing and the NFL reaching its crescendo. We recap all of the major DFS and tournament betting action below.

The Saturday Metro Mayhem was once again the biggest tournament of the week at TopBetta, offering a prize pool of $5,100. It attracted 30 contestants as well as another 21 rebuys to clear the guaranteed mark of $5,000.

NBA continues to dominate the scene at Moneyball as punters regularly play for over $100,000 a week in the daily basketball tournaments. Thursday’s tournament at Moneyball saw another massive $25,000 prize pool and after a big 9 game slate, it was Sixx6sixx who came up with the goods, amassing 389.10 points.

Some unique picks in Jamal Murray, Wayne Ellington and Gary Harris all turned it on for Sixx6sixx, who walked away with $3,250 for the win, and another $850 for coming in third too! Not a bad day at the office.

The Sunday blitz NFL tournament at Moneyball offered a $5,000 prize pool and attracted 351 players. Top prize in the tournament was $650 and after an extremely tight finish, SIR GAMBLOR’s score of 183.24 was enough to take out first place by less than a point to familiar name x-parrot.

Todd Gurley was the marquee player in SIR GAMBLOR’s winning team, racking up 43.50 points to help him pocket the cash.

DraftStars punters continue to wait with bated breath as the NBA 400 point target competition climbs, and climbs, and climbs. The prize pool now sits at a whopping $74,000 and can be entered for just $1. DFR’s very own rankings leader Jayk123 came agonisingly close to scooping the pool on Friday afternoon, when he fell just 7.5 points short of the 400 point benchmark.

As a consolation prize, however, he was able to take home 1st and 2nd in the $15 tournament to add $3,700 to his already glittering daily fantasy record. 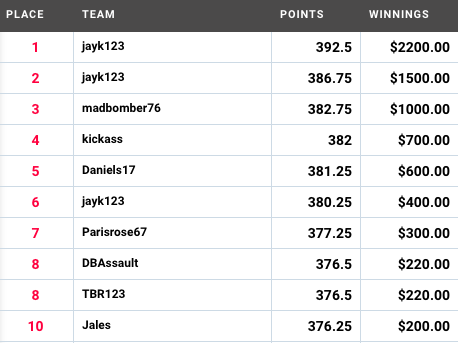