A landmark weekend in Australian DFS is in the books with Sunday the 17th of February seeing the first ever live final go off with a bang!

We recap that and all the other winners from the biggest competitions across the weekend.

The headliner competition of the weekend was on Draftstars with the first ever live final held at Club 23 for the BBL grand final between the Renegades and the Stars. There were 85 entries comprised of the best DFS players in Australia in the running for the $150K prize pool, with a whopping $50K going to first place.

The event was a smash hit for all those involved and the atmosphere in the club was at a fever pitch throughout the entire match. First place went to the 301st ranked DFR member Richozzz who was able to post the winning score despite playing Sam Harper and Glenn Maxwell by picking the eyes out of his remaining five players. Second place, and $30K went to Trent_L, and Codzy took home 3rd and $10K.

The only person at the event who possibly walked away flat was the third ranked DFR member Knova who finished 4th, a great performance if not for the prize bracket being the same as 41st!

A huge congrats to everyone who made it, and thanks to Draftstars for such a great event!

There was also the regular $10K contest held for the grand final, which was won by Sanyam who collected the $1,100 first place prize.

The other major competition this weekend with NBA on all star weekend and BBL wrapped up, was the AFLW $5,000+ Saturday competition. It was a clean sweep by Hedge who took home the top four places and a 6th for good measure to win $1,862. 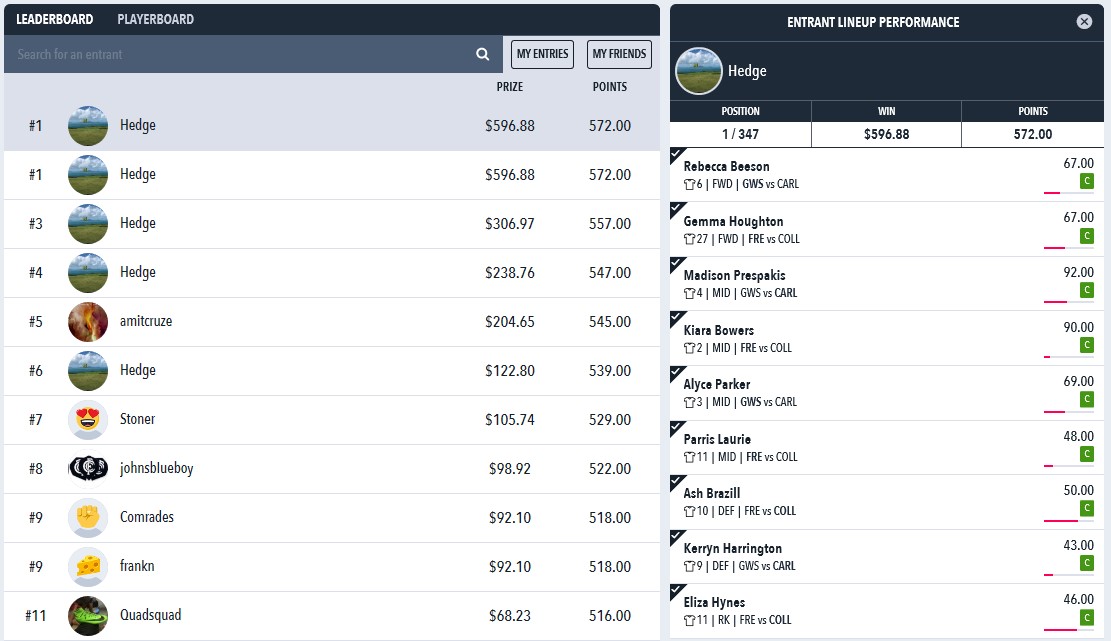 SportChamps was again loaded with racing tournaments across all codes to choose from over the weekend. This was headlined by a massive Racing Saturday $15,000 Metro (ONE REBUY) Tournament and a $6,000 (NO REBUYS) Tournament. The $15K contest was won by FastH0rse who collected the $3,155 first place prize. The No Rebuys $6K competition was won by kjames who took home $1,732.

TopBetta held racing contests throughout the weekend headlined as usual by their Saturday Metro Gallops events featuring the $2K and $1K contests. The $2K contest was won by wally82 collecting $1,440, and in the $1K contest was the 38th ranked ranked DFR member PREMIUM who collected a total of $495.