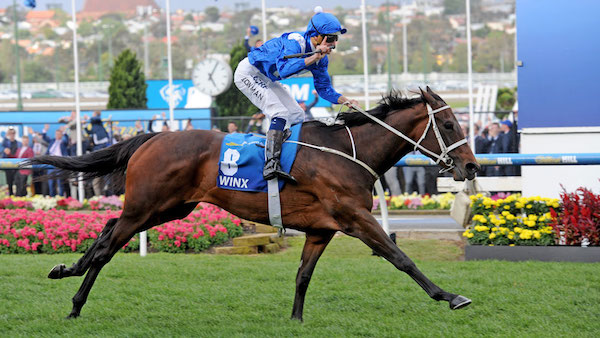 What a weekend of Australian sport and racing it was with the semi finals of the 2017 AFL season being played and one of the better days of the year in racing on Saturday at Flemington and Randwick. We take a look at all of the weekend’s action from the major daily fantasy and tournament competitions around the country.

The folks at Draftstars hosted two monster tournaments to celebrate the weekend’s AFL semi finals. Both smashed their starting guaranteed prize pools of $40,000 starting with the Geelong vs Sydney game on Friday night.

The Friday night tournament attracted almost 3500 contestants and in the end it was DONALDDUCKS who took out the top prize with a monster score of 931. His Geelong stack featured 5 scores over 100 including the huge games from Patrick Dangerfield, Darcy Lang and Mitch Duncan which helped him collect the $6,510 top prize.

Top ranked DFR member jayk123, as usual, had a few teams inside the top 10 for a solid day while Seeg12 and Clangers collected the minor placings, both scoring over 900. 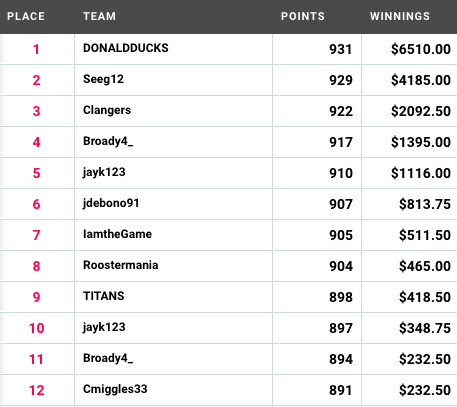 The Saturday tournament at Draftstars also smashed the guaranteed prize pool, clearing the $40k mark by $6,000. It was a lacklustre game in the end with the Giants decimating the Eagles but the $15 tournament was anything but boring. The top three ended the day separated by just two points as todd_8 won the competition narrowly over Willow1037 and DustyLatte.

Broady4_ was one of the performers of the day with 3 entreies inside the top 20. Draftstars will once again be holding some huge guaranteed tournaments fot the prelims this weekend so make sure you jump on. 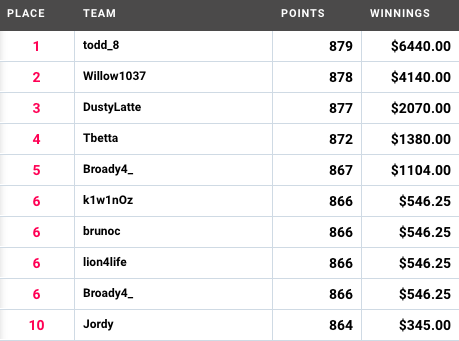 The NFL Week 2 Sunday tournament at Draftstars once again cleared the $20k guaranteed mark, attracting 1,791 contestants. After a big day of football it was matn04 who came out on top of the pack, scoring 176 points and collecting just over $3,500.

LordVito picked up second place and also seventh for over $3k total while Knova also had two teams in the top ten for a great day. 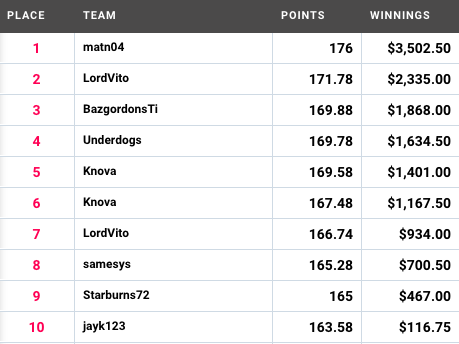 The SportChamps $100 Racing tournament provided a juicy prize pool of $2,000 on Saturday and once again it was Grog (aka DFR member Clayekelson) who came out on top. Grog was successful in this same tournament last week, and he went back-to-back with a well-timed bet on Dynamite Dream in the last race of the tournament getting him over the line for the $1,225 top prize. Grog also picked up wins in the $25 Saturday 3pm-5pm and the $25 NRL tournament to pick up a Dominator achievement for three wins on the same site in one day.

SportChamps also ran a $2,500 Mega Racing Tournament for Makybe Stakes Day for just a $1 entry. A massive field of 477 players tried their luck, with plenty of roughies and exotics helping to push the totals. After running up a stack earlier in the day, Hawkeye1609 was forced to rebuy when he was all in on Yogi to place at Flemington. However Hawkeye1609 made the most of the second chance. A nice strike on Isorich to win at Randwick at $23 was followed by two winning bets on Race 9 at Flemington – Nozomi to place at $5.50 and Hardham to win at $8.50. With both bets landing, Hawkeye1609 had turned his $10,000 start bank into $827,492.50 in just a matter of moments. On the 16th of September, perhaps it was destiny for the aptly named Hawkeye1609 to collect the top prize of $347.59. 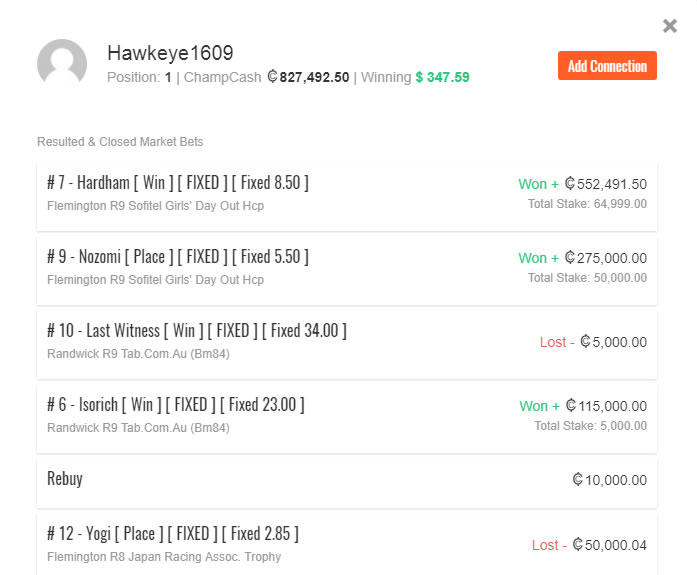 The George Main/Colgate Optic White Stakes Day tournament was the headline event at TopBetta this weekend. It offered a guaranteed prize pool of $10k and attracted 39 contestants paying the $100 entry fee.

After one of the better days of racing so far this season, it was phantom1 who took our the top prize of $3,500. phantoms1’s day was headlined by a great $5k bet on Humidor to win Race 7 at Flemington at a whopping $42 to collect over $230,000 in Betta Bucks.

From there phantom1 was able to coast to a win, finishing ahead of TopBetta veteran thedoctor and eddie55 who picked up the minor placings. 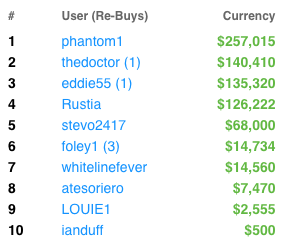 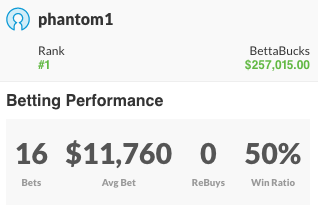 The Friday night AFL tournament was the headline affair at Moneyball over the weekend, attracting 670 entrants to clear the $8,000 guaranteed prize pool mark. Hillyj7 took out the day with his score of 847 to collect just over $1,000 but it was in the target jackpot tournament where some real cash was collected.

Moneyball lowered the target this weekend to a more reasonable 855 for the single games, and it paid dividends for 9 people on Friday night, who all cleared the mark and shared in just over $18,000.