Another great week in Australian sport and racing saw the 2018 AFLW start to heat up as well as a great weekend of racing headlined by the Black Caviar Stakes from Flemington. We take a look at some of the major daily fantasy and tournament betting competitions over the last week below.

The Randwick, Flemington, Morphettville and Doomben race meets provided a great contest for the Saturday Metro Mayhem tournament at TopBetta. The competition offered a $6,800 prize pool and attracted 25 players with a further 43 rebuys.

The day of betting was owned by well known TopBetta players as nashemmy, Barnesy80, Deatac and lewster all finished in the top five. Nashemmy was the eventual winner, edging out Barnesy80 in a tight contest by just over $2,000. Nashemmy picked up just over $3,000 for the win.

There were a couple of big tournaments at SportChamps over the weekend, kicking off on Friday night with the $50 tournament that attracted 42 players and offered a prize pool of $3,950. After a great night of betting that centred around the Moonee Valley meet, it was ‘bigpappagigi’ who came out on top, collecting just over $1,000 for the win!

The second massive tournament of the weekend was the $100 racing tournament on Saturday afternoon that featured the Flemington and Randwick race meets. It seems like Deatac is always in the mix at SportChamps and Saturday was no different as he finished 2nd in the $100 tourney. But the day belonged to rexel9, who collected $1,568 for the win, taking his lifetime earnings on DFR to over $460,000 as he races with jayk123 to become the 2nd player to $500,000 lifetime winnings.

The AFLW competition continues to be a big hit at Draftstars and the tournament of the week this weekend was the single game comp involving the Carlton vs Brisbane game. The tourney attracted 408 players and offered a prize-pool of over $5,000.

After racking up 20 disposals and six tackles it was Brisbane’s Emily Bates who topped the scoring list with 83 points, helping ‘Hedge’ to accumulate 549 points and take out the top prize of $795. After winning last weekend’s major AFLW prize, DFR member Davidian was unlucky not to go back to back, finishing 2nd in this tourney and collecting just over $660. 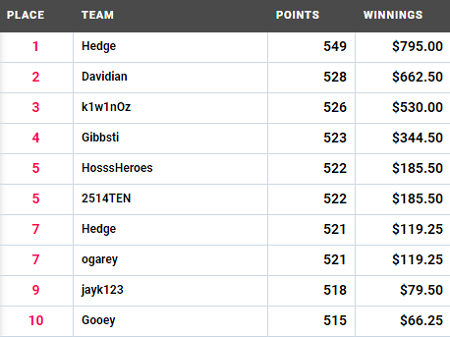 The all-star festivities will leave NBA fans without basketball for nearly a week, this meant that Thursday’s monster NBA tournament at Moneyball was a big one! The competition brought in 1,267 players and offered a massive $16,400 prize pool.