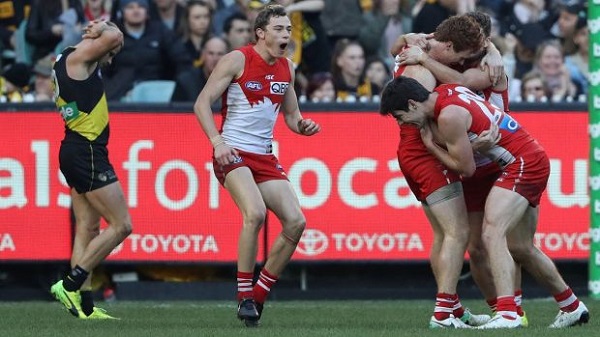 It was a big weekend for sport lovers with AFL Round 13 going down as well as the final of the ICC Champions Trophy and the beginning of the Confederations Cup. With plenty of racing on around the country as well, there were lots of opportunities to win big cash in Daily Fantasy and betting tournaments with the likes of Draftstars, Moneyball, TopBetta and SportChamps. We recap all of the major tournaments below.

TopBetta resumed normal scheduling this weekend after a massive Brisbane Carnival tournament over the last five weeks. The Saturday Metro Mayhem was the biggest tournament of the weekend, attracting 44 contestants playing for a total prize pool of $8,500.

The weekly Saturday AFL tournament at Draftstars was once again their only tournament that featured multiple games because of the by round and was therefore their richest tournament of the weekend. Players who didn’t have Bryce Gibbs in their line-up were almost completely ruled out as the Blues midfielder racked up a ridiculous 194 points.

Draftstars veteran Penny1cent took out the major prize of $4,500 with his team that scored 915 while Ballymachine and Marksmob took out the minor placings, collecting $3,000 and $2,400 respectively.

The next biggest tournament at Draftstars was the Sunday single game competition between the Dees and Bulldogs. It attracted 1,710 entrants for a guaranteed $25,000 prize pool. Some low owned players in Jordan Roughead, Christian Salem and Tom Liberatore were influential in the game, all racking up over 109 points.

Draftstars regular IamtheGame took out the major prize of $3,750 with his team scoring 884 points, he also picked up 8th and 11th place for close to another $1,000. Good to see fantasy_boss and johnnk back in the placings, both veterans at Draftstars. 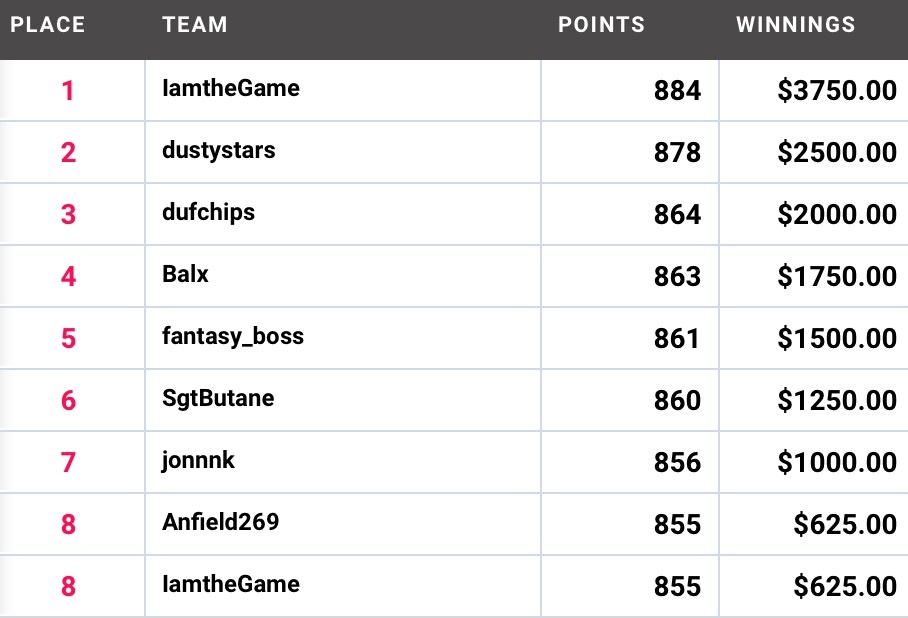 The feature event of the weekend at SportChamps was the $50 Saturday Racing tournament which built a prize pool of $1,800. It was a tough day for punters with a score of under $50,000 enough for dukes41 to claim the victory. dukes41 chipped away all day finding 17 winners from 26 bets, including a couple of nice little multis.

Those multis would see him edge past DFR member rexel9, and when the tournament veteran forgot to bet the last race, he had to be content with second place. DFR top ten ranked foley1 also finished in the money. 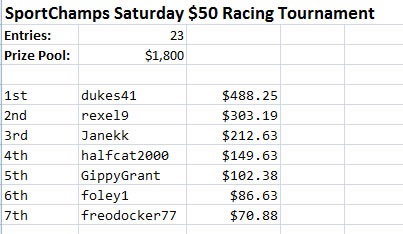 The Friday night single game competition between the Saints and North Melbourne was once again the largest tournament at Moneyball for the weekend. It attracted 475 entrants and offered a prize pool of $7,000.

In a very low scoring match, Sam Gibson proved to be the crucial point of difference for winner Tone11, who scored 715 and picked up the major prize of $925. Mfarmer17 and arguably a hall of famer DFS name in Moist Oyster picked up the minor placings.