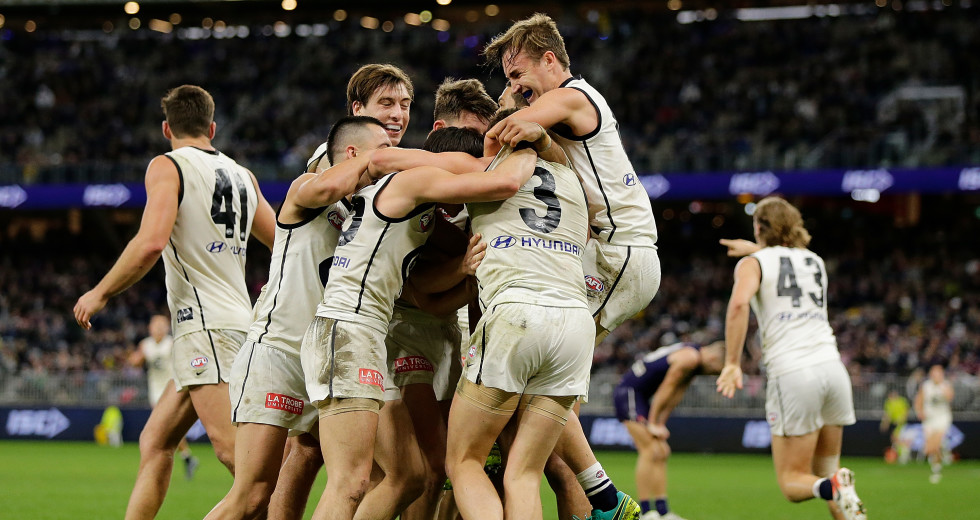 We had a full nine game slate of AFL over the weekend, which meant there were some more huge prize pools up for grabs at the major DFS sites. As always, we take a look at some of the big wins and how they did it.

Moneyball were back with some more huge AFL contests for Round 15. They kicked off proceedings with a $40,000 contest on Thursday for Geelong vs Adelaide and backed it up again on Friday with another $40,000 contest for Essendon vs GWS. Thursday night was an extremely low scoring slate with 700+ points earning you a collect. The man to beat ended up being humpty84, who finished 16 points clear on 769 and won the $4,000 first place prize. Friday night was a different story with huge scores everywhere. Peekay89 had a relatively cruisy run to the finish line as he won by 38 points, collecting $4,000 for his efforts.

It was the four game slate on Saturday that Moneyball really splashed some cash, offering a monster $100,000 guaranteed prize pool. Six teams ended up cracking the elusive 900 barrier, two of which were owned by Rwhelan09 which resulted in a $4,400 collect. Broady4 was close to having three 900+ teams and finished with a very handy $7,000, but it was eagle hunter that finished on top and claimed the huge $10,000 prize.

Moneyball went big again on Sunday for the three game slate. There were some very interesting results in the matches, particularly the final game of the round that saw the Blues defeat the Dockers in Perth as huge underdogs. This led to some great POD picks setting some players apart and making it a thrilling contest to watch unfold. In the end it was peekay89 that proved too strong for the field and took home $6,000. Second place and $2,700 was awarded to Destructor, while third place and $1,700 went to Rwhelan09.

Draftstars kicked off AFL Round 15 with a huge $100,000 Bombers vs Giants contest on Thursday night. The game itself was a really exciting contest but the DFS scoring was well down on what we’ve become accustomed to. Josh Kelly was a must-have despite his premium price, scoring 120, as was Zac Williams with his 104. The ruck was the most important pick to get right however, with McKernan’s 92 at low cost being the key pick. The man with the best formula on the night was Davidian, who earned himself a cool $9,948 first place prize. Second place was shared by humpty84 and Milito79, which equated to $3,731 each. 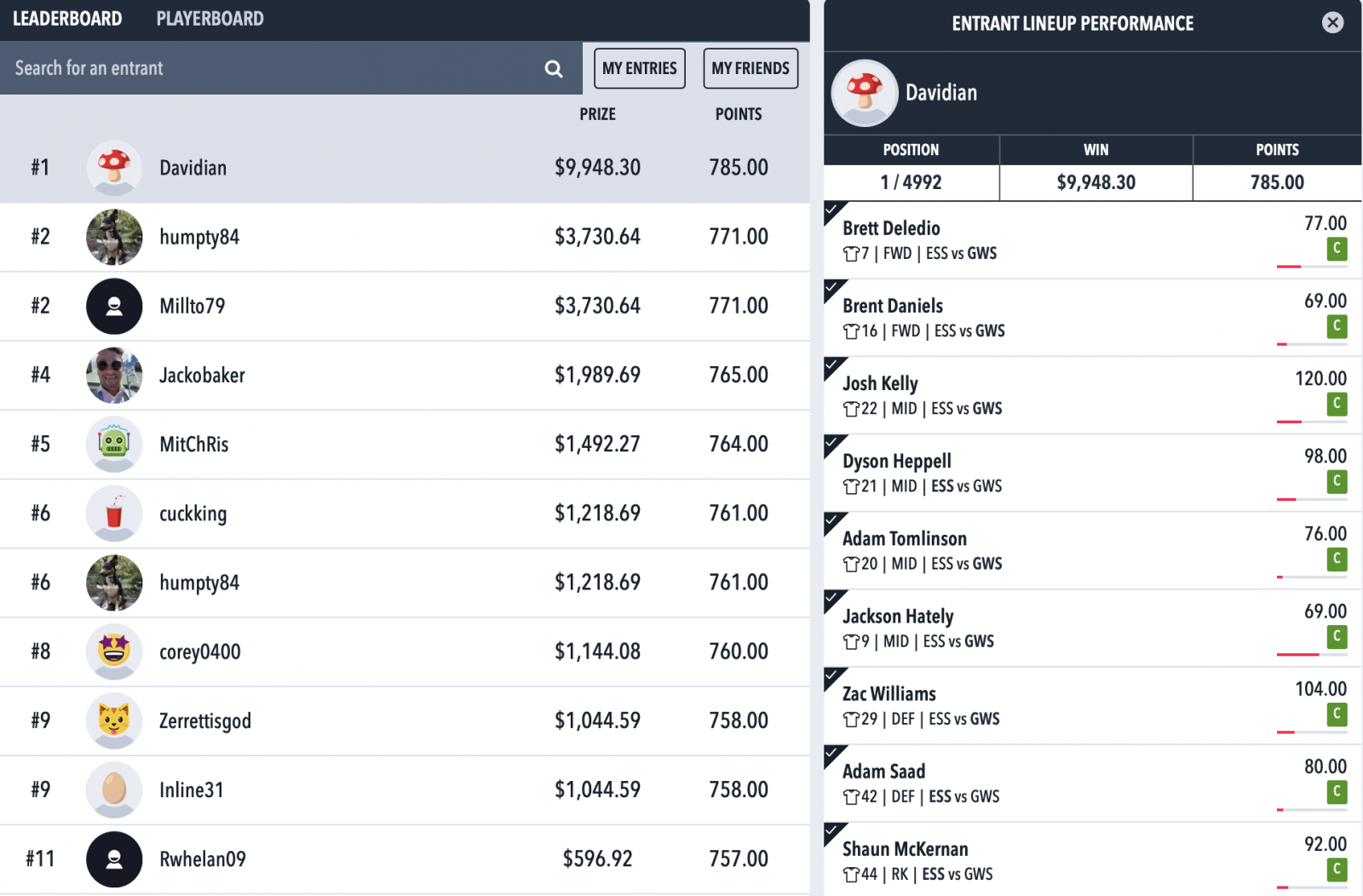 Friday night’s AFL saw the Cats host the Crows at the Cattery in what turned out to be a cracking match. Draftstars went big again for this clash with their $75,000 Guaranteed Prize Pool. We saw young Crows ruckman Reilly O’Brien go huge again with 128, while Tim Kelly (121) and Paul Seedsman (100) were also popular picks that performed really well. Our winner, Nardomar12, had all three of those guys along with a couple of other POD’s in Gryan Miers (89) and Mark Blicavs (101), which resulted in a huge $6,700 collect. Other podium finishers on Friday night were wiznation83 (second, $3,350) and 2514TEN (third, $1,680). 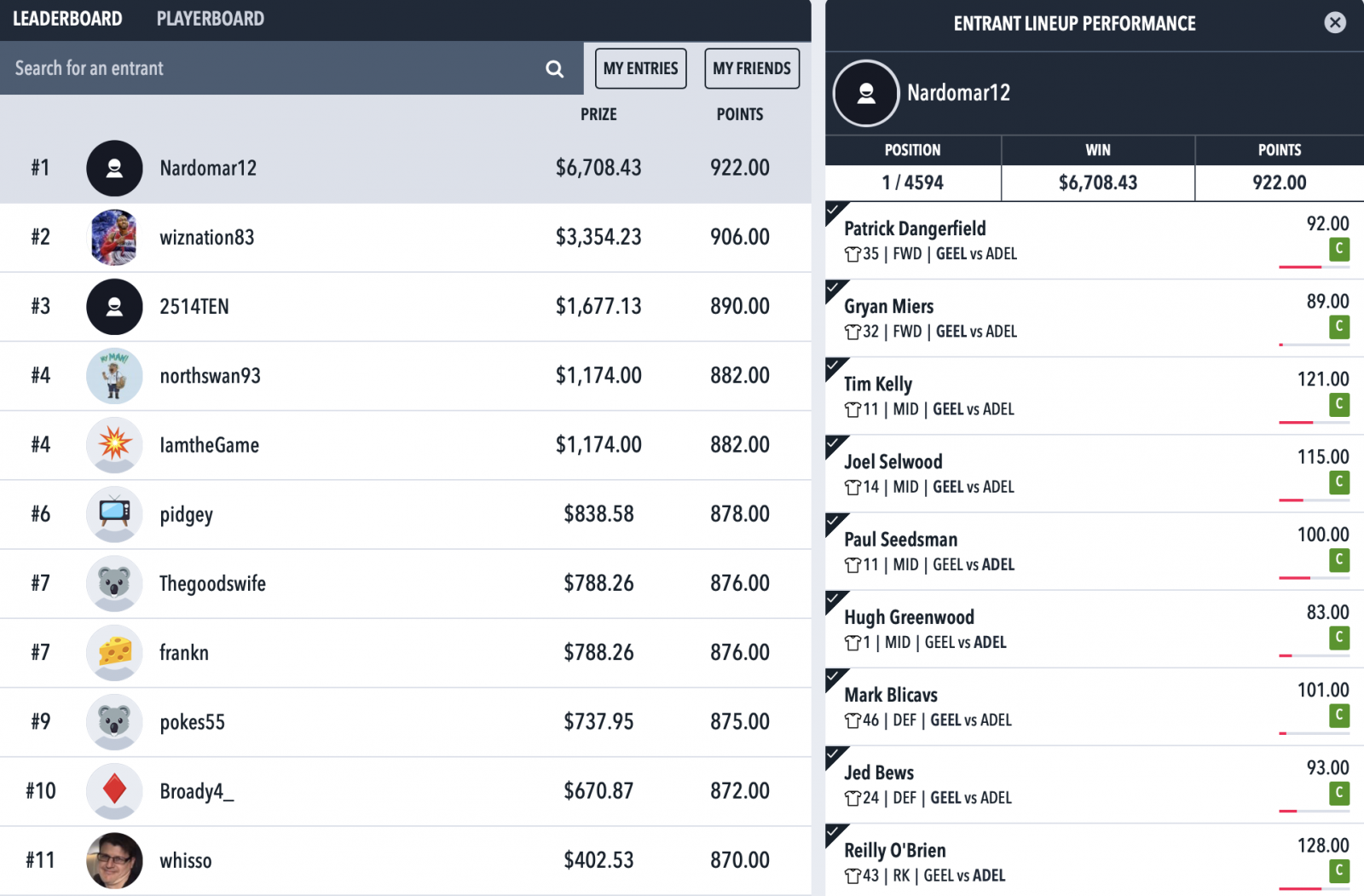