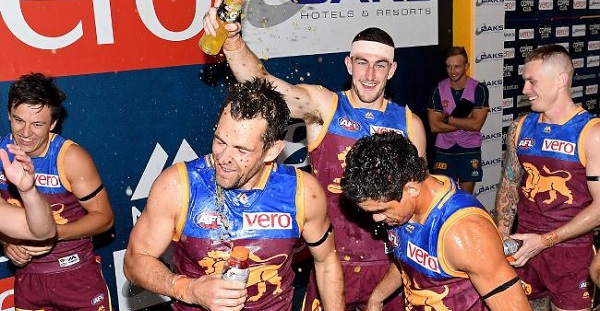 What a fantastic weekend it was in sport and racing both in Australia and abroad! There was plenty of action including AFL Round 9, a couple of G1 races and the FA Cup final which made for some great daily fantasy tournaments across the board. We recap the best of them below.

It was one of the bigger TopBetta Saturday Metro Mayhem tournaments that we’ve seen in a while on the weekend, offering an $8,100 prize pool and attracting 22 players with a further 59 rebuys. The tournament centred around the Flemington, Rosehill, Doomben and Morphettville race meets and in the end, was won comfortably by Kingjoey97!

Kingjoey97 was around the mark for most of the day but stepped up to the plate in the second last race of the day, winning a massive $70,000 on Iconoclasm to win Race 9 at Flemington to scoop the top prize of just over $3,600. A bunch of DFR members were amongst the top of the leaderboard including rexel9 who came in fourth place and collected $810.

Both the $50 and $25 racing tournaments this Saturday at SportChamps offered great prize pools of $3,100 and $4,775 respectively. The $50 tournament attracted 33 players and centred around the four major meets of the day. As he so often is, Deatac was amongst the top of the leader board at SportChamps on Saturday, along with BrutalDeluxe and Cfrance172 but it was Igottrix who took out the top prize of just over $860 from the $50 tournament.

The $25 tournament was the biggest of the week at SportChamps and attracted a whopping 191 players. The tournament revolved solely around the Doomben race meet which featured a couple of great Group 1 races. A lot of new faces were among the mix in the feature tournament of the weekend, and in the end it was ‘Kakakaka’ who took out the top prize of just over $950.

PlayON offered some fantastic AFL tournaments this weekend including two $1,500 guaranteed on Friday night and Saturday respectively. There was plenty of buzz around PlayON as they also offered some great free $5 promo and some $2 qualifiers into August’s $100k tournament!

Friday night saw the Bulldogs and Crows face off and with help from some great scores from star midfielders in Jack Macrae and Bryce Gibbs, it was DFS veteran dpwoodford who took out the top prize in the Friday night competition, collecting $420 for the win! He also collected fourth, fifth and tenth place in the tournament for a further $300.

Jake Lloyd put in one of the fantasy performances of the year on Saturday afternoon, racking up 41 touches and 15 marks to score 163 points. FunFun555 picked up first, second and third in last weekend’s major Saturday tournament and he backed it up this weekend with another standout display, collecting first and second place in the competition for a total of $720!

Another $50k guaranteed was given away on Saturday at Draftstars as the richest weekly tournament in Australia attracted 3673 players with a guaranteed top prize of $30,000. As we mentioned above, Jake Lloyd was the standout performer of the day although he wasn’t in the eventual winners team as veteran Draftstars player jayk123 racked up 896 led by big scores from Tom Rockliff, Tom Langdon, Jarrod Harbrow and Aaron Hall.

It’s been a while since we’ve seen the top ranked DFR member at the top of the $50k Saturday tournament and with the win jayk123 moved past the $550,000 lifetime winnings mark! 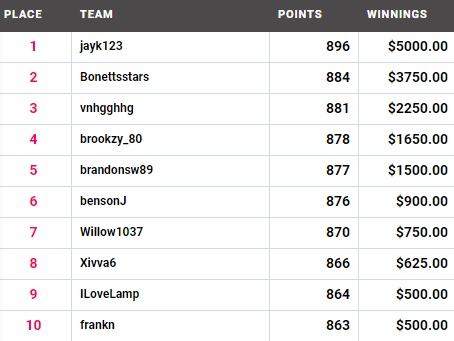