AFL Round 5 might not be over yet, but we have already had some great daily fantasy tournaments over the past weekend. Another big weekend of racing provided us with some great prize-pools and we are here to take a look at the best tournaments of the weekend below.

As usual, the Saturday Metro Mayhem was the pick of the bunch at TopBetta on the weekend. It attracted a fantastic 26 strong pool of contestants at the $100 entry level and offered a whopping $6,600 in prizes. There were plenty of familiar names at the top of the leaderboard by days end, with DFR members footy99, foley1 and Deatac all within the top few placings. However, it was 23rd ranked DFR member Harry007 who took the chocolates.

There were plenty of great racing and sports tournaments at SportChamps over the weekend, starting with the Friday night $50 racing contest. The contest attracted 35 players and had a prize pool of $2,700. In the end it was Damien28 who scooped the top prize of just over $750 ahead of Igottrix and DFR member djnewt.

The interesting thing in Saturday’s $100 tournament, which attracted 29 players and boasted a prize pool of $5,600, was that the same two players who finished atop the Friday night tournament, also collected the top prizes on Saturday! This time it was Igottrix who took bragging rights over Damien28, collecting just over $1,600 for his efforts.

Some great little AFL tournaments at PlayON this weekend offered overlays as well as qualifier tickets into August’s massive $100k AFL Super Contest! The Friday night single game tournament revolving around the Swans vs Crows game offered a $1,000 prize-pool and was taken out by Bigo1. A couple of DFR members in FunFun555 and rexel9 finished in 2nd and 3rd respectively, picking up around $400 between them.

After finishing 2nd in the Friday night competition, the Saturday $1,000 guaranteed AFL tournament was all about FunFun555. Not only did he take the top prize of $310, but he also picked up 3rd-5th on the leaderboard, collecting another $380. Well done on a dominant weekend FunFun555!

And in arguably the performance of the weekend, 'Sieko' achieved an extremely rare feet in the $11 buy in NRL tournament at PlayON on Saturday. Seiko entered the max 15 teams in the compeittion, and the tournament was set to pay out $800 over the first 7 places. Amazingly, Seiko collected every single dolloar of the prize pool, finishing with teams from 1st-8th. Not sure if that has ever been done in daily fantasy but an amazing effort regardless!

The biggest tournament of the week was once again the Saturday AFL slate at Draftstars. Instead of $50k guaranteed this weekend, it was just $40,000, due to Draftstars offering a MONSTER $100k tournament for Anzac Day on Wedensday.

The $40k tournament still offered a massive first place prize of over $5,000 and after some great unique picks in Tim English, Ed Curnow and Jack Steele, it was Draftstars veteran Tryanhit who took first place with a score of exactly 900 points. 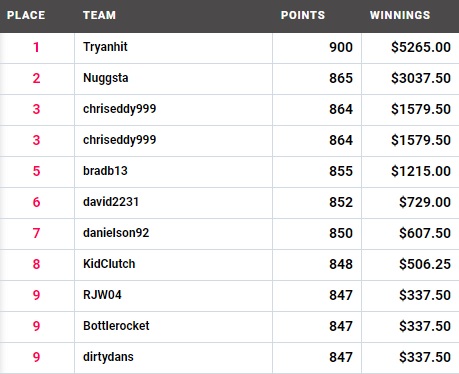