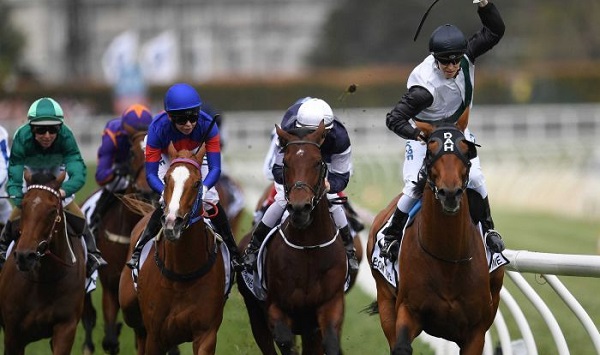 Another great week in sport and racing saw the underdog ‘Boom Time’ win the 2017 Caulfield Cup as well as the commencement of the 2017-18 NBA season with a massive bang at some of the big DFS sites across Australia. We take a look at the action from all of the major daily fantasy and betting tournaments over the last week below.

A massive weekend of racing was headlined at SportChamps with the $10,000 Caulfield Cup Mega Tournament. At $10 per entry, the tournament attracted 60 contestants and offered a top prize of just over $2,200.

Highlighted by a 83,000 chip win on a exacta in the final race at Caulfield, Doriemus was a come from behind winner on the day, turning his 10,000 in starting chips into over 135,000 to collect the top prize. Some familiar names were in the top placings as Donkey, foley1 and Deatac took our the minor placings.

The conclusion of the two-week Caulfield Cup tournament was the highlight of the weekend at TopBetta. At $110 to buy in, the 103 entries plus another 67 rebuys made for an interesting tournament across the two weeks. Footy99 took the lead and 142,000 chips into week two but couldn’t hold on for the win as an amazing day of betting by Fannypack saw him double the chip tally of the nearest opponent.

Amassing a total of over 889,000 chips, Fannypack’s tournament featured a whopping 125 bets and was an accumulation masterclass to take home the top prize of $5,000. Although his biggest win of the day came as he backed the 96/1 underdog Boom Time to win the Caulfield Cup.

It’s all about American sports at Moneyball at the moment with some monster tournaments on in the NBA and NFL over the past week.

NBA season kicked off Wednesday but it was the 11 game Thursday slate that headlined the week at Moneyball. $55,000 was on the line for the $15 entry tournament and after a massive day of games that was at some points tough to keep up with, it was Tbetta who took out the top prize of over $7,000.

Led by the likes of Damian Lillard, Myles Turner and Bradley Beal, Tbetta scored a whopping 394 points, just six off the big 400 NBA target to win the day. As per usual, laminedor was in the mix, picking up 2nd place as well another 5 teams inside the top 60.

The major NFL Sunday slate tournament at Moneyball this weekend offered a $10,000 guaranteed prize pool and attracted 671 entries. Ezekiel Elliot was the star of Sundays play, rushing for 147 yards and 2 TD’s on his way to 40.40 points and a helping hand in AKLWAR86’s big win of $1,300.

Kookies was just 5 points behind the leader in second place while AKLWAR86 also took out third place to make for a great day. Laminedor present in the top ten, obviously.

Not to be outdone, Draftstars also offered a monster tournament for the 11 game NBA slate on Thursday. The $50,000 tournament attracted a whopping 3381 players and offered a top prize of $7,000.

There were a few familiar names in the top ten including invinciBell, peekay89 and awisely but it was Nexus who took out the top prize with his score of 351 points led by a monster performance from Giannis Antetokounmpo. 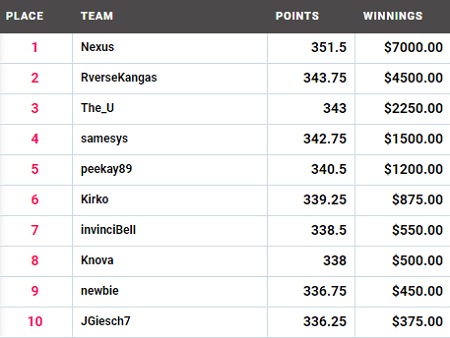 The NFL Sunday slate tournament at Draftstars was another exciting one. As we mentioned above, Ezekiel Elliot was the leading force on the day but the winning team from Shanbon didn’t feature the Dallas star. Shanbon scored 187.36 points to take out the $3,000 top prize while Knova picked up five teams inside the top 25. 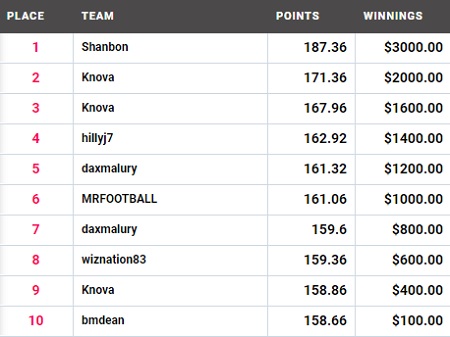