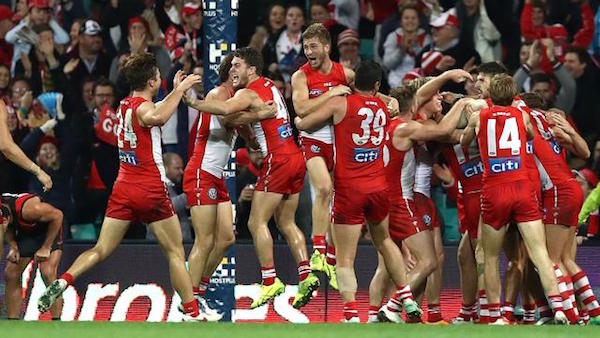 After a massive weekend of Australian sport and racing, we wrap up all of the action from the major Daily Fantasy Sports sites. The AFL returned to it’s full nine-game compliment after the bye rounds and proved to be one of the most exciting rounds of football in recent history while racing returned to Randwick and Flemington.

With some great Australian racing meets on throughout the weekend, the Saturday Metro Mayhem was once again the highlight of the weekend at TopBetta. DFR member Donkey was good enough to take 2nd place on the day but it was TopBetta regular Freelance who claimed the top prize of $3,000.

The tournament brought in 38 contestants competing for a prize-pool of $7,500 and ended in a tight finish with Freelance just 15,000 BettaBucks ahead of his nearest opponent. Freelance came home with a wet sail with winners in the final two races of the day, including a win on Idatwo at $6.80 in the last at Morphettville.

A massive weekend at Draftstars saw the AFL 990 Target competition Jackpot to over $22,000 and the regular $15 tournaments get back to their full slate of games after the bye period.

The Saturday AFL tournament registered 2,050 entrants all competing for a massive $30,000 guaranteed prize pool. There were some unusually strong performers throughout the day with the likes of Jonathon Patton, Drew Petrie and Tom Campbell all scoring over 120.

Jawbreaker eventually came out on top with a whopping score of 903 and pocketed himself a cool $4,500 while DFR all-star Tryanhit picked up 4th and 5th places for almost $4,000. 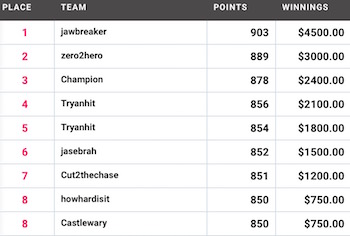 The Sunday AFL tournament was $25,000 guaranteed and attracted 1,888 contestants. Unlike Saturday, it was the regular Fantasy studs who got it done with Sam Docherty, Patrick Dangerfield and Jack Steven turning it on.

Two teams with scores over 900 battled it out for the top spot with upthecobras eventually beating out Shani by just 2 points. Draftstars regular asanque picked up 7th and 8th places for $1,750, moving him past the $30,000 lifetime winnings mark. 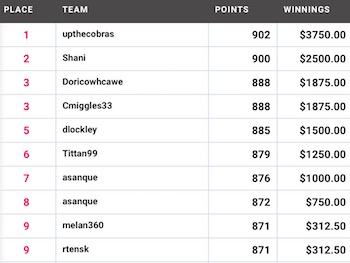 Once again the Friday night single game competition was the biggest at Moneyball over the weekend. Sydney vs Essendon attracted 514 competitors all vying for a share of the special $7,000 guaranteed prize pool.

Jase3377 was able to take out the top prize of $925 with his team scoring 799 while aforementioned asanque was once again in the top five.

SportChamps continues to blossom as an option for fantasy betting players, with their AFL and NRL tournaments proving very popular every weekened. This week's $50 AFL tournament attracted 19 entrants who combined to produce a tidy $1,900 prize pool.

Once again it was Mr Brightside who emerged victorious with bets on the Hawks and Freo, both alternative lines of +30.5, helping him over the line to pocket the top prize of $375.38.

SportChamps run weekly NRL and AFL tournaments at buy-in levels of $2, $10, $25 and $50 so there's something for everyone! 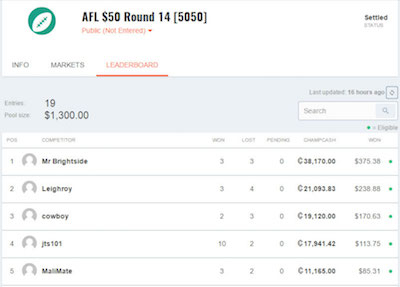