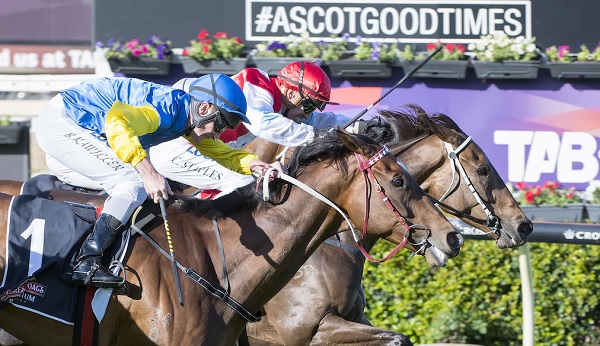 Another great weekend in Australian sport and racing saw the Railway Stakes ran in WA on Saturday night along with the much-anticipated start of the 2017-18 Ashes series. There was also plenty happening at the daily fantasy and tournament betting sites across the country and we recap all the action from the major competitions below.

The Saturday Metro Mayhem was once again the biggest tourney of the week at TopBetta, offering a $5,000 prize pool to the 32 contestants that shelled out the $100 entry fee. There were another 16 rebuys in total and in the end it was TopBetta regular Mustang030591 who took the chocolates on Ballarat Cup Day.

The highlight of the fay for Mustang was a $115,000 win on Grand Dreamer to win Race 8 at Ballarat at juicy $7.70 odds. Mustang was a blowout winner on the day, with the next two on the leader board, bymobydick23 and nashemmy, over $200,000 in BettaBucks behind.

The $50 Saturday racing tournament was the pick of the bunch at SportChamps this weekend, attracting 30 entrants and offering a $2,300 prize pool. Some unfamiliar names made up the top of the leaderboard in ausi_mickey and sunline, who fought out a tight finish to claim first and second respectively.

There was also some interest in the Ashes 1st Test tournament, attracting 55 entries playing for a $550 prize pool, keep an eye out for more tournaments at SportChamps in the upcoming Tests.

NBA continues to dominate the scene at Draftstars, offering some massive prize pools daily and culminating in the $30,000 Thursday tournament. The 400 target is starting to become a little easy for some, as two players surpassed the mark on their way to finishing 1st and 2nd in the $15 Thursday tournament.

RVinny’s team, led by some big scores from Russel Westbrook, Khris Middleton and Chris Paul took out the top prize with a score of 413 points while LowKeyLucas wasn’t far behind with 408. RVinny collected $3,900 for winning while osme familiar names in procession, Stevennfl and ILoveLamp filled up the minor placings. 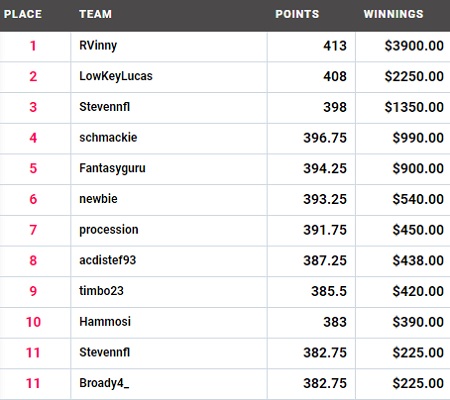 In a massive Thursday at Moneyball, 11 players surpassed the 400 point mark in the $15 Thursday monster tournament, which also offered a $30,000 prize pool, attracting 2058 players. The highest score of all was achieved by benlarosa who racked up 426 points, led by Westbrook, Middleton and Tim Hardaway Jr.

$3,900 was the top prize picked up by benlarosa, while dpwoodford and myfootyboots were some familiar names in the top ten. DFR leader Jayk123 went missing on the day, securing no better placing than 66th on Moneyball or Draftstars.

There were less games in the Sunday NFL tournament but still plenty of action as 379 contestants vied for the $5,000 prize pool. After some big performances by superstar wide receivers Antonio Brown and Julio Jones it was ‘Undies’ who took out the top prize of $650 with a score of 174.62.