It was another great weekend of sports with horse racing, AFL Round 10 and Formula 1 the major highlights. There were some closely fought DFS tournaments with huge cash prizes won. Check out some of the major wins below.

TopBetta offered us another instalment of their ‘Metro Mayhem’ tournament on Saturday, with 17 players entering and a cool $5,000 prize pool up for grabs. A lot of players made some excellent plays during the day, but it was djnewt who came out on top, finishing with $142,500 to collect the major prize ($3,000!). Rounding out the top 3 were nashemmy and lewster, who collected prizes of $1,500 and $500, respectively.

The Formula 1 tournament on PlayON attracted 63 players who fought it out for a share in the $2,000 prize pool. Red Bull was a popular pick among the players at the top of the leaderboard, while Aussie Daniel Ricciardo was a great point of difference for some of the top entries. The tournament ended in one of the most exciting finishes we’ve seen with Viking13 and Bigo1 collecting $480 each as they tied at the top of the leaderboard. Ozzie and Ian Williams weren’t far behind in third, collecting $240 each, while rexel9, Kayne Thornhill and Ryan Bissell tied for fifth place and $126.67 each. 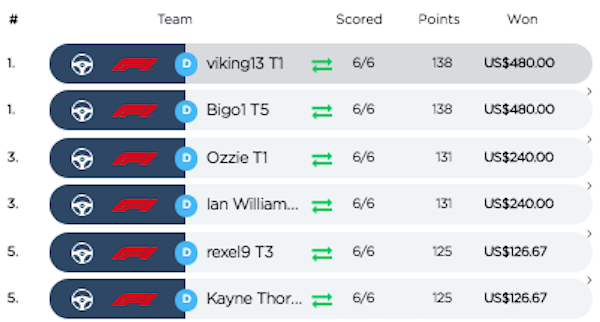 The tournament for AFL Saturday on PlayON featured 43 entries who were vying for the $1,500 prize pool. In the end it was dpwoodford who got the chocolates, finishing with 387 points to collect the top prize of $465, as well has sneaking into 6th place with another entry, which he collected a further $71.25 for. Magnum16 and procession rounded out the top 3, receiving $322.50 and $247.50, respectively.

The tournament with the biggest prize pool in Australian fantasy was back on the weekend, with Draftstars again putting $50k up for grabs in their Saturday AFL contest. There were 3,193 entries all up, however, it was Tryanhit who reigned supreme with a huge score of 865, thanks to big games by Jack Steven, Seb Ross, and Devon Smith, who were all selected by less than 6% of entrants. Josh Caddy helped teevo88 finish second to collect $3,750, and dustystars landed $2,250 by finishing in third.

It was a huge weekend for Tryanhit, as he took home the Draftstars Sunday AFL competition as well ($4,615 for first), which featured 2,723 entries and a $35,500 prize pool. Angus Brayshaw was a must have for the top entries, with his 166 points being a huge POD. Jayk123 had another good week and finished second in the tournament to collect $2,662, while Tryanhit finished third with one of his many entries.