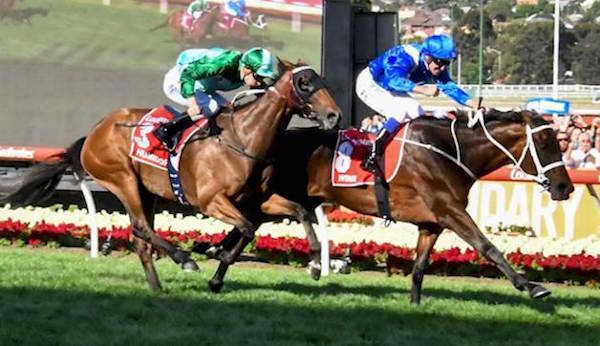 What a massive week in Australian sport and racing highlighted by the 3rd consecutive Cox Plate win by the mighty mare Winx! There was plenty of DFS and betting tournaments on throughout the week not only in racing but some monster tourneys in both NBA and NFL. We recap all of the action below.

The biggest tournament at Moneyball over the last week was the NBA Thursday Monster, worth a whopping $50,000. It attracted 2826 entries and produced one of the more thrilling finishes in a major DFS tourney for some time.

Evan23 was in the lead by a mere two points when the buzzer sounded in the final game of the day, the only problem is, that game between the Lakers and Wizards was destined for overtime and 2nd placed oastrawt had Laker Kentavious Caldwell-Pope up his sleeve. It took KCP until there was just 30 seconds left in the OT period to hit the three that would sink Evan23, providing a good sweat even for those who were just bystanders.

The NFL Sunday Blitz might not have been as thrilling as the the major NBA tournament but it still offered am $8,000 prize pool and attracted 430 contestants. A dominant performance by wheldon saw him take out the top prize of $1,050 by a whopping 19 points over his nearest competitor.

The Thursday NBA tournament at Draftstars also offered a massive $50,000 guaranteed prize pool and attracted 2995 entries. Not only was the tournament won by Kingduey, but the coveted 400 point mark was also surpassed with his team featuring some monster scores.

Kingduey collected a cool $5,000 for the win while ‘newbie’ also had a great day with five teams inside the 20. 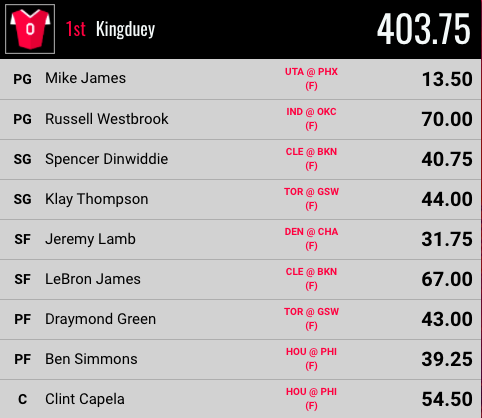 The Sunday slate NFL tournament at Draftstars once again offered a $20,000 prize pool this week and provided a much closer finish than that of Moneyball. In the end it was ‘THE_BEARD’ who took our the top prize of over $2,000 with his team that scored 182 points.

The Houston trio of Deshaun Watson, Lamar Miller and DeAndre Hopkins proved to be the telling factor in the win, combining for over 90 points to carry the team across the line. Some familiar names at the top of the leader board were Deatac, jayk123 and ILoveLamp. 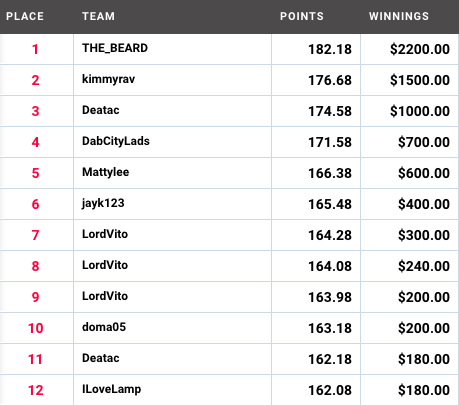 Double the action at TopBetta on the weekend with the Friday night and Saturday double header at Moonee Valley. The betting kicked off Friday night with the $3,100 Manikato Stakes tournament.

The tournament attracted 19 players and was full of familiar names, one of whom in foley1 took out the tournament after turning their 5,000 BettaBucks into 49,700. The win was highlighted by a 5,000 bet on Suspense in the last race at Moonee Valley to collect the winning amount.

The Saturday tournament at TopBetta revolved around the 2017 Cox Plate and featured a massive $15,000 guaranteed prize pool. It attracted 59 players plus another 41 rebuys at $110 a pop.

Once again there was plenty of familiar names in the running but at the end of a stellar day of betting it was Mustang030591 who won the top prize of $5,250 after turning his 5,000 BettaBucks into a whopping 222,000 with only one rebuy.

SportChamps also offered a big tournament for the Saturday of the Cox Plate. $10,000 was on the line with 43 contestants vying for the top prize of just over $2,600. SportChamps veteran lewster had a great day of betting, turning his 10,000 in chips into over 100,000.

The highlight of the day for lewster was a 80,000 win on Lucky Hustler in race at at Moonee Valley which allowed him to cruise for the rest of the day.