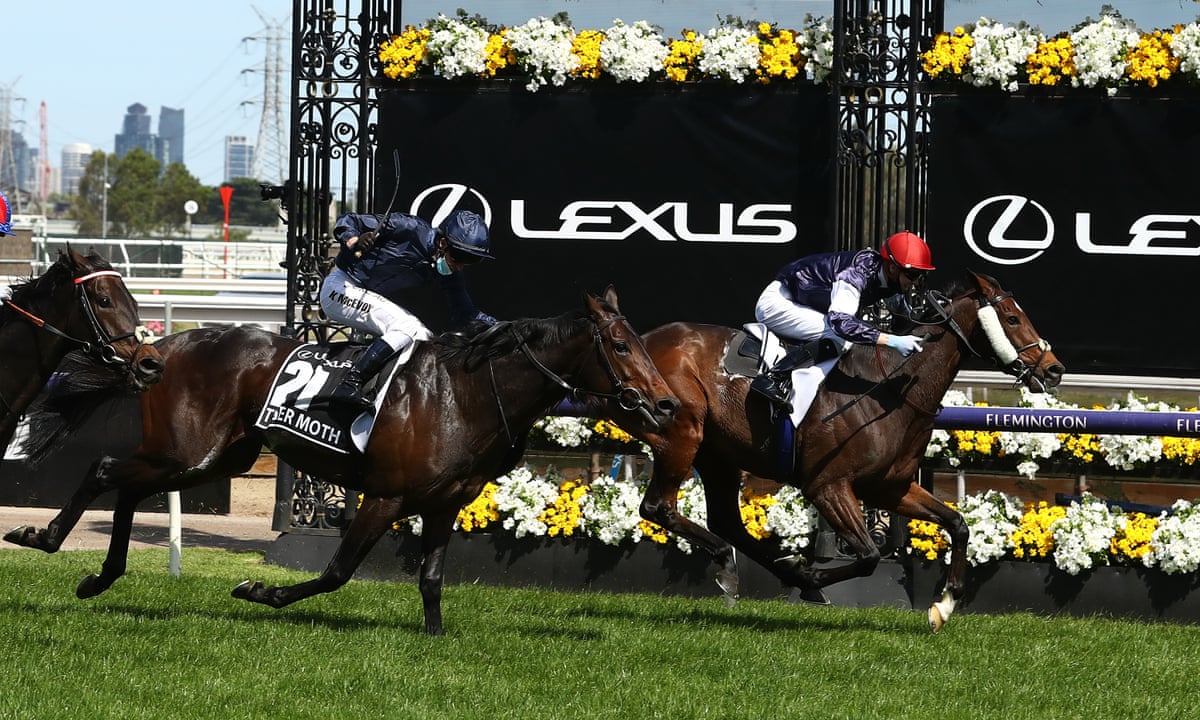 Whether you trick or treat over Halloween or watch the rain come down in Sydney, fantasy sport continued last week with some big contests by the fantasy sites. The highlight however is the Melbourne Cup carnival!  Let’s break down the big winners over the last weekend.

The start of the Flemington carnival is always highlighted by the Group 1 action of Derby day. The big story coming from the race day was the former Kangaroos coach Denis Pagan training the Derby winner ‘Johnny Get Angry’ at juicy odds. SportChamps laid down the challenge to win $1 Million in the “Wishlist” and while it did not go off on Saturday or Tuesday, there is one more chance on Stakes day.

Saturday’s featured tournament was the $50 Entry $20,000 pool attracting 283 entries and with only 1 rebuy it was a great value for money tournament to reach the money. Congrats to ‘Bottman’ who went all in on 3 selections for a 180K Champcash haul! That was good enough to collect the $3,729 first prize. 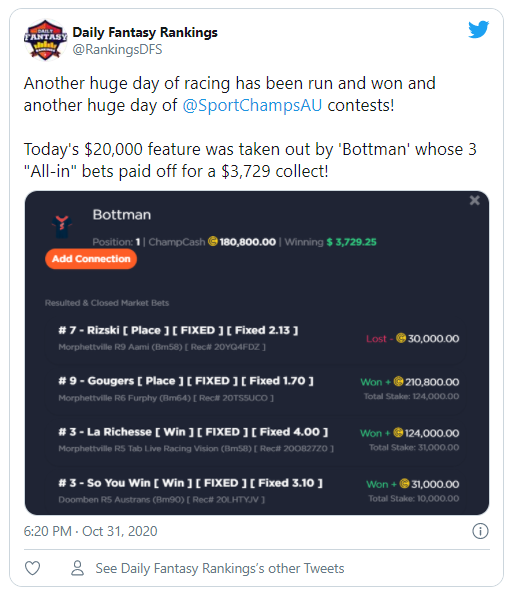 The Melbourne Cup was won by a brilliant ride by Jye McNeil on Twilight payment and there was plenty of action on SportChamps. The $3,200 tournament for a $2 entry was well supported and with a box Quinella ‘ultimus’ took the chocolates with a $557 collect! 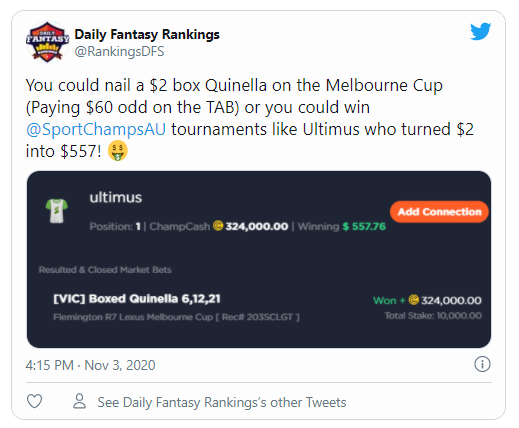 Elsewhere, ‘Yoursong’ nabbed the Melbourne Cup winner and a $26 winner at Flemington on there way to a $3,005 collect in the $50 Metro Racing contest.

Racing on Draftstars took centre stage on Saturday with a $20,000 Flemington feature on the site. 1325 entries were received and after a massive 6 winners from 9 races including the roughie of the day in ‘Shout The Bar’ 1st prize went to ‘Lancaster467’. Interesting that Lancaster was the only player to max out the contest. A 2nd place train to ‘nickpower98’ netted him $3,722 as well! 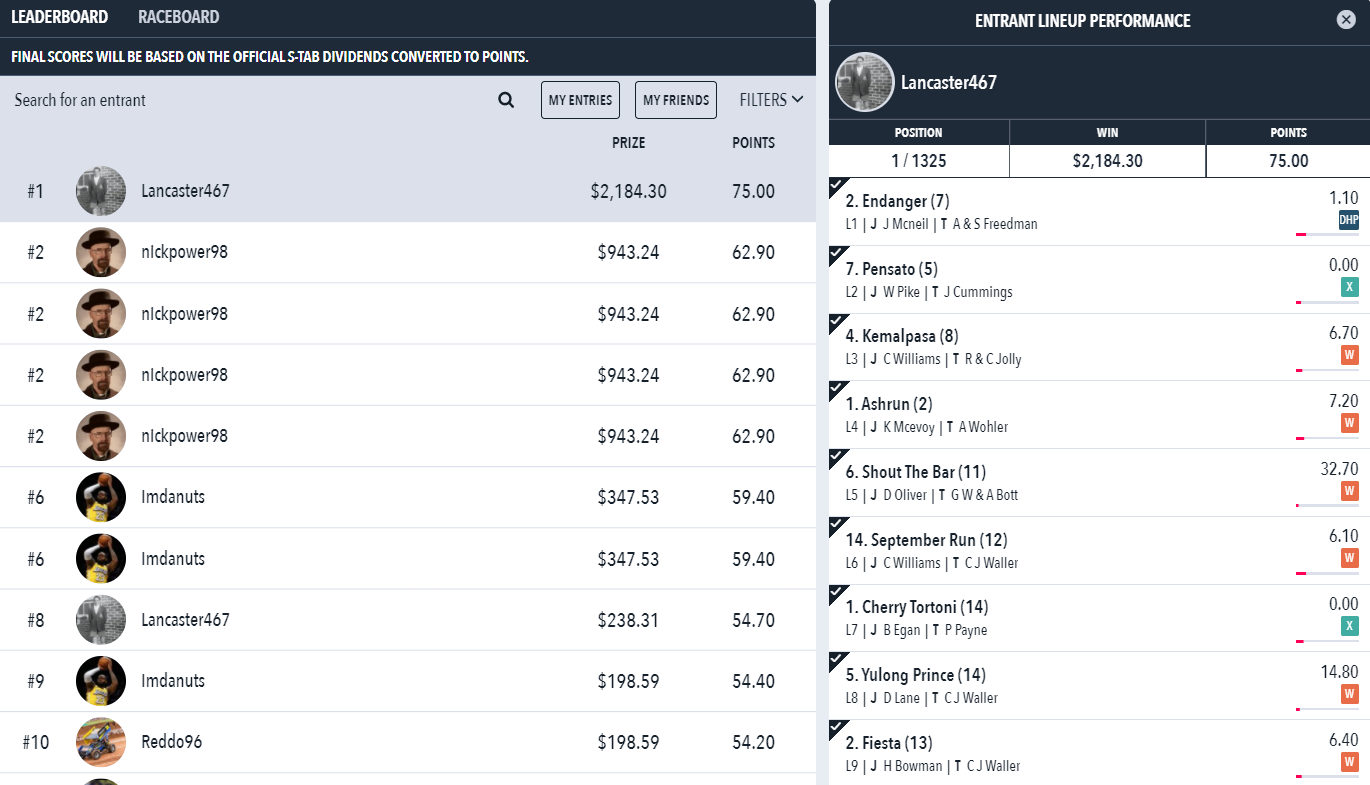 In the NFL Week 8 Sunday slate, DFR member ‘Electric_Eel’ feasted on the $30,000 contest by selecting a core group of players including Dalvin Cook (48.6FP), Davantae Adams (30.3FP) and Patrick Mahomes (36.64) to win just under $10,000 in prize money in top 20 entries. It is more than likely one of the biggest wins for the NFL on the site! Congrats to the Eel, magnificent effort! 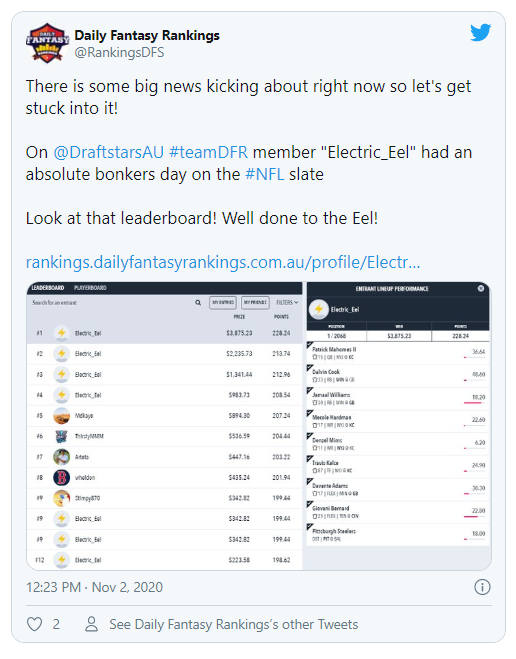 The big news from the weekend that Team Australia barely scraped over the line in the DraftKings World Cup!

The DraftKings World Cup concluded on Sunday with PGA, NASCAR and NFL Football closing out the tournament. This event consisted of 100 of the best DraftKings players from across the globe — 10 from each region — forming 10 teams that competed for two weeks. Six of those teams were eliminated after Round 1 and the remaining four battled it out in various sports in the second and final round this past weekend.

The PGA contest was tight but when DFR members ‘Arteta’ and ‘Clangers’ got 6/6 through the cut it put Australia in a strong position. Come early Monday morning, ‘Arteta’, ‘Jayk123’, ‘Newbie’ and ‘Clangers’ occupied the top 5 positions. Arteta taking out the slate! 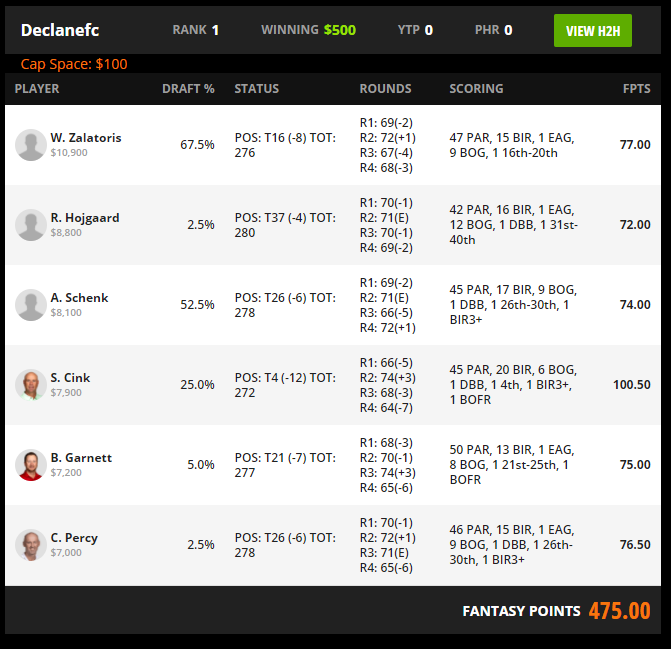 However after the disaster of the EPL in Week 1, DraftKings posted a Double Points contest for Week 2. And being the weakest sport for the team, struggled with only ‘ILoveLamp’ posting a top 10 score. It was clearly a niche sport for the team and decided it needed to “get in the bin”.

With Australia on the back foot, it clawed itself back into the tournament and then some with a brilliant performance in the UFC. The team identified a core group of fighters and played optimal builds in the contest. Turns out the optimal team chopped first place!

Still behind after the EPL ‘schmozzle’ the NASCAR slate on early Sunday morning could have been anything. But the team identified that the Martinsville track is hard to overtake on a short course and rostered another core stack of drivers. For ‘Smatho10’ he pivoted off a popular Brad Keselowski and took out 1st place. With ‘Knova’, ‘jbarrett_16’, ‘Arteta’ and ‘Clangers’ in the top 10. It meant a small lead over Canada and Europe with a distant Germany in 4th. 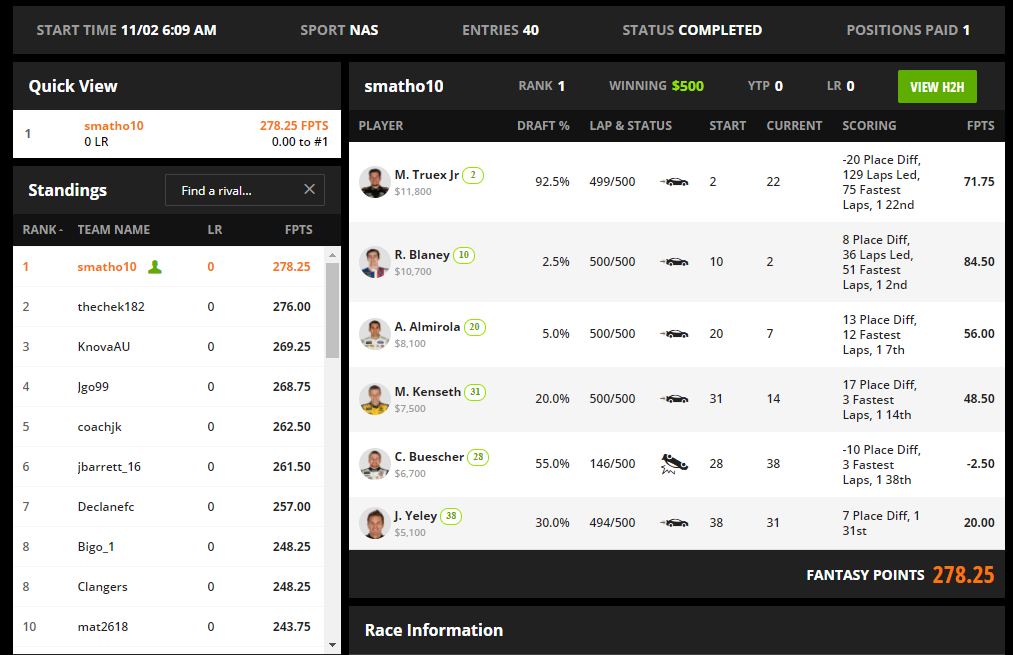 For the final event it was double points for the main slate in the NFL. The team were looking “ok” after the first wave of matches but landed on some high ownership of Jimmy Garoppolo. ‘Smatho10’ took some invasive action and used the player swap to pivot to DK Metcalf and Justin Herbert who had monster games to effectively win the World Cup for the Australians. Smatho finished top 7 (would have been plum last) and barely hung on as a fast finishing German side dominated the slate. 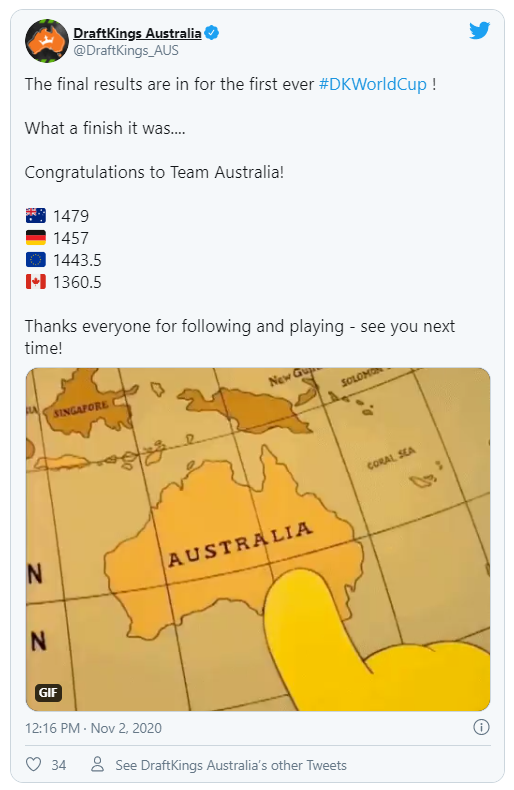 The action continues for the Flemington carnival. Keep an eye out for our horse racing tips and fantasy contests both on SportChamps and Draftstars throughout the month of November!