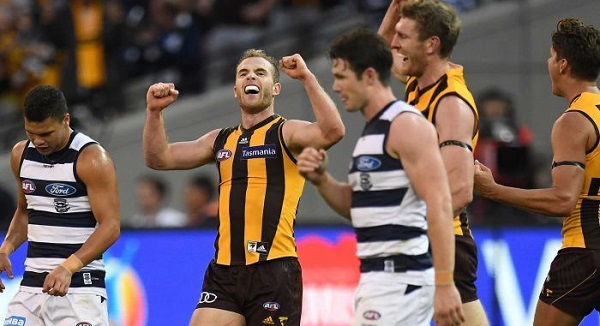 The 2018 AFL season continued this weekend and some quality race meets were held around the country making for some fantastic DFS contests. PlayON, Draftstars, SportChamps and TopBetta all offered some big prize pools and we recap the major tourneys of the week below.

Adelaide and Richmond kicked off AFL Round 2 on Thursday night and PlayON offered a $1k guaranteed tournament to celebrate. A lot of teams were ruined in the first half as star Crows midfielder Matt Crouch went down with an unfortunate hamstring injury. Rory Laird stepped up in his absence, racking up 42 touches and 141 fantasy points to help Bigo1 claim the top prize of just over $300. Some familiar DFR names in rexel9, FunFun555 and lion4life were amongst the top of the leader board.

The Saturday tournament spanned four games and offered another $1k guaranteed prize pool. While the Blues lost by 34 points, half back Ed Curnow was the player of the day, racking up a monster score of 160 points with 38 touches and 10 tackles. As he has been so often throughout the first few rounds of AFL at PlayON, it was lion4life who was at the top of the leaderboard, picking up $370 for the win ahead of rexel9 and highly ranked DFR member procession!

While the prize-pools are still on the smaller side at PlayON, the website is beginning to gain some traction so make sure you jump in on the AFL tournaments while there is still a good overlay!

TopBetta hosted one of the larger Saturday Metro Mayhem tournaments they ever have on the weekend, attracting 27 players and a further 51 rebuys for a $7,800 prize-pool! After passing the $200,000 mark just a few weeks ago, 4th ranked DFR member Deatac has already climbed past $230,000 and added to that with yet another win in the Metro Mayhem this weekend.

Deatac placed 14 bets for the day and had a 44% win ratio with the highlight coming on a $50,000 win on Mr Bellagio to win Race 9 at Doomben, the final race of the day. The win helped him catapult to the top of the leader board, above Harry007 and Barnesy80 to collect just over $3,500.

Not to be outdone by his fantastic TopBetta win, Deatac also took out the top prize in the $5,900 Saturday racing tournament at SportChamps. The tournament attracted 36 players for a $100 buy in and spanned across some great Saturday metro meets.

Deatac has been unstoppable on both SportChamps and TopBetta of late, and the $1,652 win just adds to an extremely impressive 2018 which has seen him skyrockets to fourth on the DFR leader board.

The Saturday AFL tournament at Draftstars was another massive one, this week offering a guaranteed prize pool of $50,000! It was a day for the familiar names at Draftstars, as Davidian topped the leaderboard with a monster score of 942 points. Ed Curnow, Tom Lynch and Jesse Hogan were the catalysts in Davidian’s team, helping to edge out another top ranked DFR member, Tryanhit’ by just three points.

Collectively, Davidian and Tryanhit took out seven of the top 20 placings, both adding to their already extremely impressive DFS resumes. 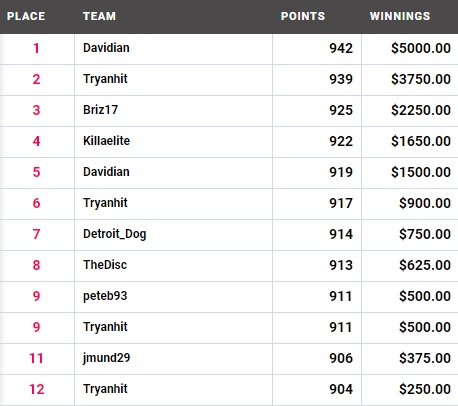