This past weekend was absolutely loaded with DFS tournmanets in Australia with a wide array of sports on offer. Racing and NBA tournaments continued to go strong, while Big Bash has really started to heap up and there were also NFL playoffs in the mix.

SportChamps was again loaded with racing tournaments to choose from over the weekend headlined by the Saturday Metro Tournaments with the rebuy contest prize pool at over $6,000, and the no rebuys at over $4,000. Mattypunts12 took home first place and $1,387 in the rebuy tournament, while in the no rebuys tournament it was lewster who finished at the top of the leader board winning $1,023.

TopBetta held racing contests throughout the weekend headlined as usual by their Saturday Metro Gallops events featuring the $2K and $1K contests. Both the $2K contest and the $1K contest were won by the 11th ranked DFR member deatac who collected a total of $1,944.

Draftstars has been all over the BBL this summer in the lead up to its Big Bash live final. There were three games over the weekend with two $10k contests held on Saturday and a $15k on Sunday.

The first game, BBL$10,000+ Stars v Thunder was won by mikew1990 who won $976.59 and also took home a ticket to the Biggest Bash, while DFR’s very own BBL wizard BigHef finished in 4th position.

Fourth wasn’t enough for BigHef on this weekend, however, as on Sunday he went out and won the whole damn thing to take home $1,140 and also collect himself a seat to the Big Bash live final. BigHef provides daily previews ahead of every BBL match so remember to check them out here on our site.

There were the regular $15,000 NBA contests held on both Saturday and Sunday. Saturday’s slate was taken down by 81st ranked DFR member Dcrutch who piled into the Boston Celtics to collect the $1,148 first prize dividend. The leader boad was full of the usual suspects with number 1 ranked DFR member ILoveLamp finishing 2nd, 3rd and 6th and 4th ranked dtownsend finishing 4th. 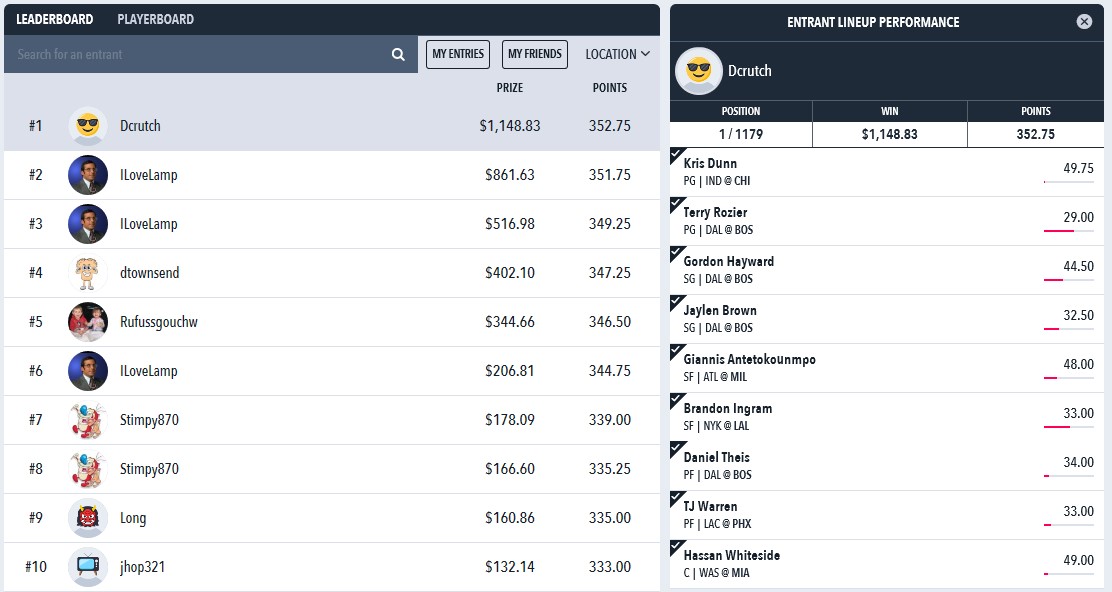 Sunday it was newbie in first place while the 7th ranked DFR member Stimpy870 finished 2md, 4th, 7th and 9th to pocket over $1,500. Dtownsend and Dcrutch also backed up their Saturday performance with top 5 finishes again. 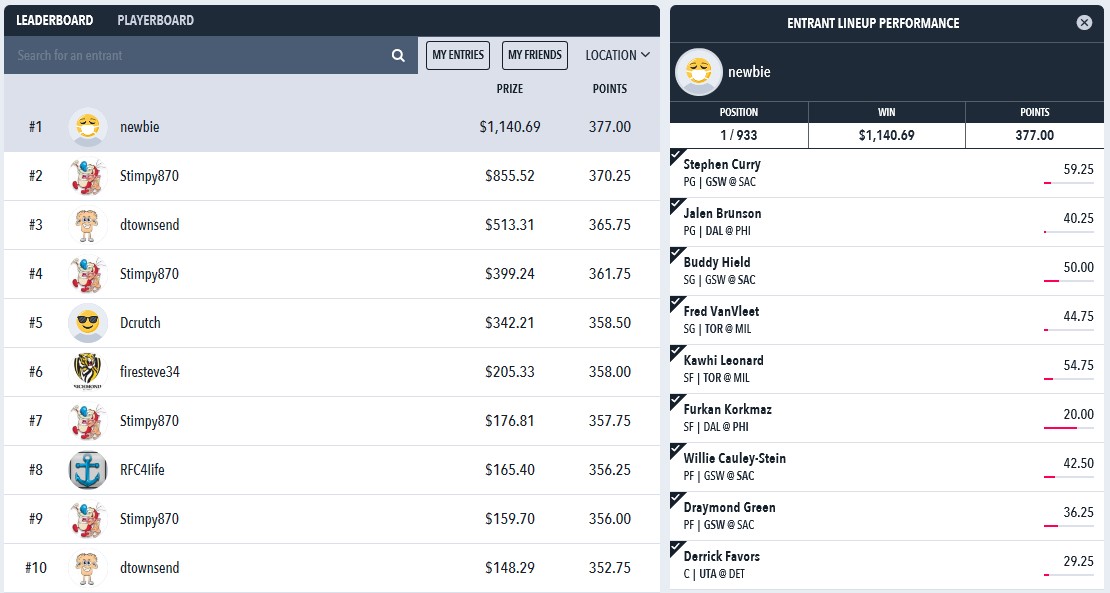 The NFL playoffs kicked off which meant action on a Sunday here in Australia and Draftstars held a $3,000 contest for the Cowboys v Seahawks. This was taken down by the 32nd ranked DFR member Mattylee who also finished in 5th place to net himself a total of $537.97.

Moneyball had two major NBA GPP’s on Saturday and Sunday with $7K and $6K prize pools respectively. Saturday’s was won by curto86 who took home the $925 first place dividend.

Sunday was taken down by Getdownonit who collected $800 for first place while 5th ranked DFR member JayC2009 finished tied third with 3 teams to win $560.