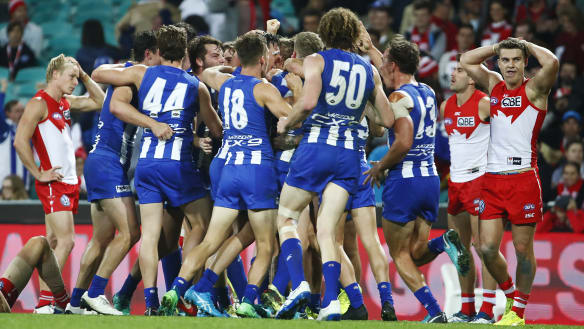 The daily fantasy community in Australia was buzzing throughout the last week with some great tournaments on offer in the AFL, racing and more! We break down some of the results from the major tournaments over the last week below.

The TopBetta Saturday Metro Mayhem was once again the major tournament of the week, attracting 20 players and offering a fantastic prize pool of $5,100. After a great day of betting that revolved around the Flemington, Rosehill and Morphettville meets, it was DFR member and TopBetta veteran bitemenow who came out on top.

bitemenow’s day featured 13 total bets at a 54% win ratio and was highlighted by a $30,000 win on French Emotion to win Race 8 at Morphettville to help pick up the first-place finish and was closely followed by some familiar names in Deatac and rexel9.

Formula 1 was the talk of the town at PlayON last weekend but with no races on this weekend it’s back to the AFL for the Round 7 action. PlayON featured two fantastic tournaments on the Friday and Saturday respectively this weekend, both offering guaranteed prize pools of at least $1,500.

The Friday night competition featured the Geelong vs GWS game and some interesting point of differences lead the way for the top teams as Rhys Stanley and Nick Haynes were surprise high scorers. After a closely fought contest, it was DFR member procession who came out on top, turning his $20 entry fee into a cool $420.

The Saturday competition at PlayON was a little bit bigger, attracting 40 players and offering a great $2,000 prize pool. With a five-game slate, there were plenty of unique teams in the running and some point of differences who played well on the day were Mark Hutchings and Tom Bellchambers. Another close game ended with PlayON regular Seeg12 taking out the top prize of $620 with his team score of 844. Well done!

SportChamps continued to be a first point of call for racing tournament fans this week, offering a great slate of tournaments including the $50 Friday night contest and the $100 Saturday tournament.

The Friday night tourney attracted 15 players and offered a prize pool of 900 and in the end it was DFR member and SportChamps regular, C.C.DeVille who captured the win, collecting a tidy $350 and adding to his already impressive DFR resume.

The Saturday $100 tournament offered a massive prize pool of $4,500, one of the biggest of the week at SportChamps, and attracted over 30 players. The Morphettville race meet was the sole focus of the tourney and as he so often is, it was djnewt who was amongst the top of the leaderboard, this time picking up over $800 for second place while gelekis17 picked up the $1,300 for the win! Well done.

As it often is, the Saturday $50 AFL tournament at Draftstars was the biggest tournament of the week in Australian daily fantasy sports. It attracted a massive 3028 contestants so still had a little overlay and revolved around the five-game slate in the AFL on Saturday.

SyCo05 was the outstanding performer of the day, racking up a whopping 894 points on the back of some monster scores from Josh P. Kennedy, James Sicily and Jarrod Witts and Mark Hutchings. SyCo05 collected a massive $5k for the win while dtownsend was the best of the DFR members in fourth. 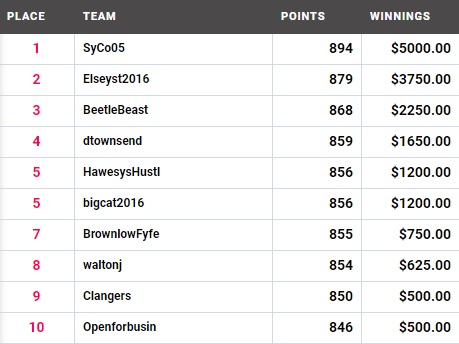