Another massive week in daily fantasy sports and betting tournaments around Australia. With the BBL now in full flight, we have nightly tournaments of up to $15,000, combine that with some massive prize pools in the NBA and NFL, not to mention horse racing, and it makes for one of the most exciting times of the year for punters. We recap some of the major tournaments over the past week below.

The Saturday Metro Mayhem continues to be a favourite amongst TopBetta punters, with the $110 entry tournament racking in 26 entrants with a further 18 rebuys this Saturday. The contest covered the Randwick and Gold Coast race meets and after a great day of betting, it was ‘DeeDub’ who took out the top prize of $2,250 after turning $5,000 in chips into a tidy sum of just over $61,000.

Some relatively new names were amongst the top of the leader board, with mobydick23 and geniicv8 taking out the other placings on the podium. Lewster and rexel9 were amongst the familiar names in the top five.

Despite the efforts of the BBL to knock it off, the NBA Thursday Monster is still the biggest weekly tournament at Moneyball. This week if offered an $18,000 prize pool and attracted 1363 players. Some big performances by Anthony Davis, Kevin Durant and Giannis Antetokounmpo led the days scores, but interestingly, the winning team owned by ‘b4sk3tb4ll3r’ owned none of those players!

‘b4sk3tb4ll3r’s squad racked up 356.60 points on the day, led by some good performances by Steph Curry, DeMar DeRozan and Michael Beasley to scoop the $2,350 top prize! It was an even day all round, with only one player claiming multiple entries inside the top 20!

Draftstars was pumping on Saturday night for the big BBL Melbourne Derby between the Stars and the Renegades. A $15,000 prize-pool was offered for the big game as it attracted 1128 players. Mohammad Nabi was the top performer of the night racking up 125 points after making a rapid fire 52 with the bat and claiming a wicket.

Aaron Finch and Ben Dunk were also big scorers, and all in the the team of eventual tied winners ‘Standard’ and who other than Jayk123. The winning teams scored a whopping 494 points to each collect $1,500, while Jayk123 also picked up 3rd place. 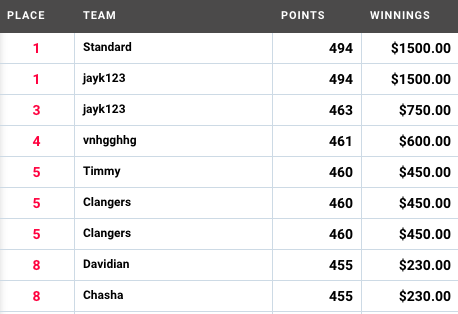 The biggest tournament at any of the sites over the last week was the NBA Thursday at Draftstars. It offered a $22,500 prize pool and attracted a huge 1732 players. A familiar name amongst DFR members, ‘Penny1cent’ took out the top prize after scoring 354.50 points. Another familiar name, Stevennfl was also a top performer on the day, claiming four teams inside the top 20.