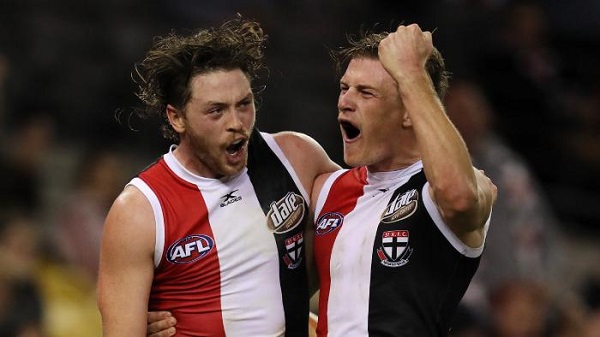 A big weekend in Australian sports and an even bigger weekend for Aussie punters saw a massive amount of money collected in Daily Fantasy Sports competitions and betting tournaments around the country. Round 7 of the AFL was played and produced an outrageous six upset victories which would have thrown a lot of compeitions at TopBetta and SportChamps out of whack.

Luckily for the DFS players, it was the player performances we were interested in. Another big week at Draftstars saw $60k collected on Saturday and Sunday while Moneyball also had a big weekend. See our wrap up from the weekend’s results below.

The largest tournament at TopBetta this weekend was once again the Saturday Metro Racing competition which saw 54 entrants compete for a guaranteed $10,000 prize pool.

Bazzaa came up trumps, turning his 5,000 BettaBucks into a whopping 151,505 by the end of the day. His day was highlighted by a great bet on Amelie’s Star to win the Queen of Elizabeth Stakes at Morphettville which saw him turn a bet of 30,000 into a cool 117,000. 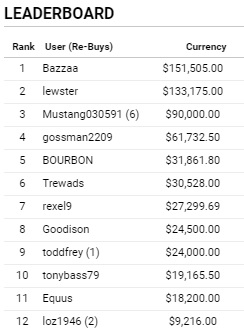 Draftstars once again offered up the largest prize pools for Aussie punters whis weekend with their weekly Saturday and Sunday tournaments both topping over $30,000 guaranteed.

The Saturday tournament saw 2,271 entrants competing for the top prize of $6,200. Tryanhit, who already boasts the title of having won the most money ever on Draftstars, cleaned up on the day, taking out 15 of the top 20 spots including the top prize. His top team on the Saturday, which scored a massive 1,022 points, also won the $1 Saturday target for an extra $16,302, taking his winnings for the day to well over $25,000. 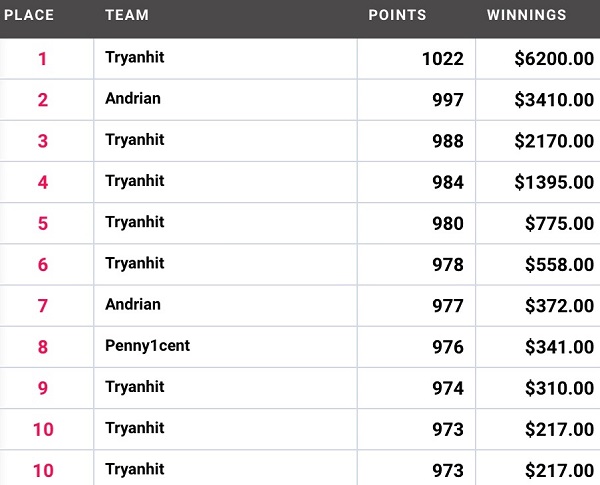 To put the icing on the cake, Tryanhit backed it up with a 4th place in the Sunday tournament, taking home an extra $1,350.

The Sunday tournament had 2,249 entries and it was DraftStars veteran Davidian who took home the major prize of $6,000. His score of 975 beat out two teams entered by another Draftstars regular in peekay89, who picked up second, third and ninth place for over $5k. 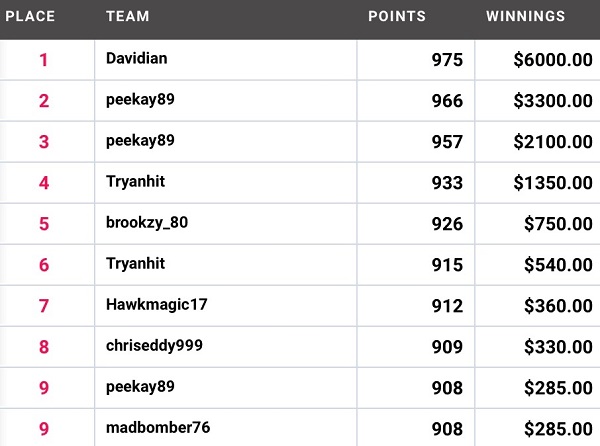 The biggest tournament of the weekend at SportChamps was the $50 AFL Round 7 competition. 34 entrants competed for the $2,200 prize pool and in the end, it was luke_italia01 who came out on top while Darkrealmx and WEBBX09 walked away with the minor placings. 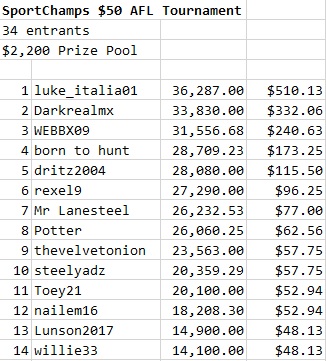 The biggest event on Moneyball was once again their Friday Night Footy tournament as the Saints hosted GWS in the round's opening match. The Saints came out victorious as fantasy stars in Jack Steven, Tom Scully and Stephen Coniglio were all big scorers on the night.

The Friday night comp had 671 entries and a guaranteed 10k prize pool. The aforementioned peekay89 came out victorious here, taking home $1,300 with his team that scored 838 points while Studog and WCE2016 took out the minor placings.