The Adelaide Strikers had a stunning 2017-18 BBL campaign which saw them finish second at the end of the regular season. They then went on to win their semi and then raised the BBL trophy for the first time after victory in the final.

Coming into the 2018-19 Big Bash League season, they have stuck by the team that brought them success in the past season, ensuring that they will be again one of the top sides in BBL08. 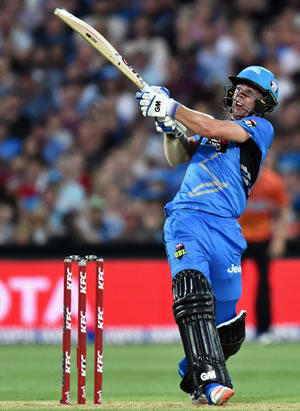 Alex Carey is one of the success stories of the Big Bash League. With 443 runs in BBL07, Carey was the competition’s second highest run scorer, which helped to catch the attention of the national selectors as he is now part of the Australian T20 and ODI squads. Carey thrives in the shortened form of the game and can be a big fantasy point scorer as an opening batsman who also keeps wicket.

Jake Weatherald is an accomplished opening batsman who was in stunning form at the back end of the last BBL season, bagging three half-centuries and a maiden BBL ton in his last five digs. He looks set for a big year at the Strikers and since you know he’s going to be opening the batting, he could well be one of the first picked players in fantasy lineups.

The Strikers’ skipper is one of Australia’s rising young talents. His batting is capable of destroying bowling attacks, while his handy off-spin has proven to be quite useful at slowing down the opposition scoring. He is a player that’s always in the game, and one of the marquee players for fantasy lineups, but could miss several games BBL games due to International duties this season.

Ingram is an experienced South African International player, having played 31 ODI’s and 9 T20I’s in his career. As one of the Strikers’ international recruits, he’s likely to bat in the top four and is a powerful striker of the ball. He is very strong square of the wicket, which becomes apparent with the short square boundaries at the Adelaide Oval. Ingram can bowl some occasional leg-spin which makes him a very tidy selection in your fantasy lineup.

Jono Wells is a reliable middle-order batsman with a safe, technically-sound batting style and great speed between the wickets. Not renowned as a big boundary hitter, Wells is better at picking off quick singles and rotating the strike. Wells is not a big-name player so you might find him a good point-of-difference choice for your fantasy lineups.

Jake Lehmann is a talented middle-order batsmen, who has shown his capabilities in First Class and One-Day matches, but is yet to make a big impact in the Big Bash League. This is mostly due to the fact that he is always batting lower down the order at number five or six, and has been a little starved for opportunities. Lehmann scored a mighty 50 off 22 balls last season in a One Day match for South Australia, so the potential is there. Has only bowled 2 overs in the BBL for his one wicket, so don’t expect him to get too many opportunities with the ball either.

Michael Neser has improved tremendously in recent years to now be considered close to a genuine all-rounder which is extremely valuable in fantasy cricket. Neser was recently picked in the Australian Test squad that toured overseas, and was in the reckoning for selection. Neser can swing the ball early, and has good variations late which means he is consistently in the wickets. He’s also likely to bat as high as number seven, so can smash out some very handy runs at a high strike rate late in an innings. Neser may be one of the more expensive players in fantasy cricket contests, however his game is perfectly suited to T20 cricket, so he may well be worth the investment. 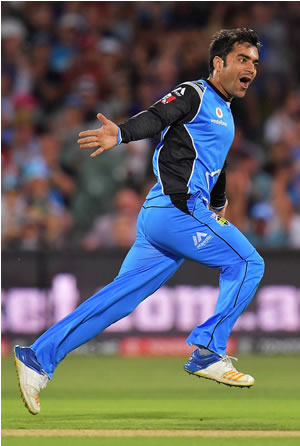 The young Afghanistani slow bowler has quickly established himself on the world stage as one of the cult figures of the Big Bash League. He very recently turned 20 years of age, but has already played in 52 ODI’s and 35 T20I’s for his country, making him a very experienced young player. He is a brilliant bowler and one that the local Aussies have a hard time playing against. He’s also a clean striker of the ball in the lower order, which all point to him being a tremendously valuable player in fantasy cricket.

The ageless Peter Siddle is one of the veterans of Australian cricket and, with some recent good form, he has worked his way back into the Australian Test squad. Siddle is an absolute tradesman bowler and will do whatever job is required, but his returns last season for the Strikers were surprisingly solid. Siddle may open the bowling, and he has a useful slower ball for the death overs, but he is pretty one-dimensional and unlikely to be scoring any points in the field or with the bat.

The lanky quick will be a marquee bowler in the Strikers side this season after he earned selection in Australia’s One Day and T20 International sides last season. Stanlake bowls with sharp pace and good bounce while possessing a magnificent yorker which makes him a handful for any batsman. Stanlake is a regular wicket taker and tight bowler who can dry up runs, making him a great choice for your fantasy bowling attack.

Ben Laughlin is one of the most experienced bowlers in the Big Bash League. He might not be the quickest pace bowler going around, but he has plenty of variations and is a master at bowling at the death. His magnificent strike-rate of 15.29 in the BBL shows just how quickly he can deceive the batsmen and collect wickets. Laughlin is also a useful fieldsman and is often placed in positions where he is likely to pick up catches which makes him a very handy addition to any fantasy side.

Matt Short has come across to the Strikers from the Renegades looking for more opportunities. He started his career batting well down the order, but has proved himself recently in the top order. His last innings of 62 off 48 balls as an opener was his highest score in BBL so far, showing quite clearly his ability with the bat. He has also been bowling well in Shield cricket for Victoria, so he might be a surprise packet this season if he can squeeze into the team, and could be a hidden gem for fantasy lineups.

Cameron Valante is an emerging all-rounder who is yet to debut in the Big Bash League. He might find it tough to crack into the Strikers team, but if he does, his batting can be destructive and his bowling is more than handy. If you can pick him up for a low price, he could be a good addition to your fantasy lineups.

Winter is a developing swing bowler looking to earn a regular player in the Strikers lineup this year. While he hasn’t yet had many opportunities on the BBL stage, he has performed well in his three appearances with five wickets at a low average (11.60) and good economy (6.96). Winter is also not the worst tailend batsman going around. He might not play a lot of games this season, but if he does play then you should find him a relatively cheap option.

Liam O’Connor has served as a back-up spin bowler for the Strikers for a few seasons now. He gets good turn from his stock leg breaks and his googly, which makes him a tricky bowler to face, but as a young spinner, he has been targeted at times by opposition batsmen. In fantasy cricket, he’ll be a cheap option, but one this capable of picking up a few wickets.

Wes Agar is the youngest brother of Australian Test player Ashton Agar. Wes is a fast bowler who got a taste of the Big Bash League last season, where he played 3 games. While he didn’t take any wickets, he bowled with good pace. He might get more of a run this season, and will be one of the cheaper options for fantasy lineups.

The 21-year old rookie is a very-talented off spinner, who has good variation in his deliveries, making him an ideal T20 player. He is a genuine wicket taker and could well prove to be an astute pick up in fantasy teams if he plays throughout the season.

Grant is a meticulous pace bowler, whose bowling style has been inspired by the great Glenn McGrath. He’s had a taste of state cricket already and given his consistent style, could prove to be difficult to score runs off. Will be a budget option in fantasy teams.