The BBL is back in Hobart on Monday night with an important clash between the 3-5 Hurricanes and 4-4 Scorchers. The Hurricanes do sit second last on the table but can still make the finals, especially if they win this. It’s a similar story for the Scorchers as they sit equal fifth with the Heat.

Blundstone Arena is basically a batting paradise with its short boundaries and usually a very nice batting wicket. In the last 12 BBL games, the venue ranks 2nd in the league for batting points scored as a result. The last clash saw the Heat total 212 in their first innings and the Hurricanes followed with 181 off their 20 overs. So it’s fairly safe to stack batsman from either side. For bowling options, Blundstone is generally a tough place to take wickets and keep your economy rate down. As such, it ranks dead last in the BBL for bowling points scored. In terms of the weather, it will be 29 degrees during the day on Monday in Hobart but will drop down to around 16-20 during game time. The ‘Canes don’t mind chasing totals under lights at home so it’ll be an interesting coin toss. 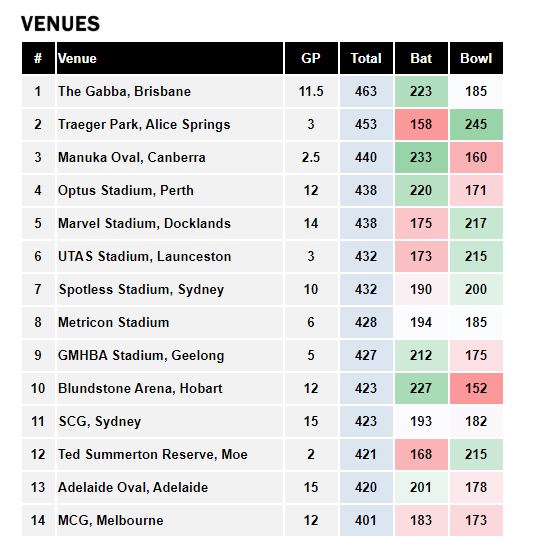 Injuries and no D’Arcy Short have hurt their BBL09 title chances but the Hurricanes continue to play in close games, which is providing vital experience for their younger players. They’ll be coming off a last-over defeat to the Thunder in Sydney and previously gave the Heat a scare at the Gabba. So they should enjoy returning to Blundstone Arena, where they’ve won 6 of the last 8 games. Starting with their batting, it’s mainly reliant on Matty Wade without Short opening the batting. Wade was impressive at Blundstone last season so he’ll likely need to score 40+ for the ‘Canes to get up. Caleb Jewell has been in good form with the bat. So they just need more from their middle order. It’s fair to say the Miller signing hasn’t worked out and McDermott hasn’t converted starts into big scores. The good sign against the Thunder was seeing George Bailey tee off. With no Faulkner and Meredith, the ‘Canes bowling stocks are getting tested and the likes of Livingstone/Mitch Marsh could do a lot of damage here. Ellis has struggled with his economy rate and Ahmad just isn’t really troubling batsman. So it’ll be up to Boland and Rogers in the powerplay to keep the Scorchers in-check.

The Scorchers are coming off a huge win over the Heat on Saturday night at Optus Stadium and will hit the road again to Hobart. Scheduling has been hard them on this season so it’ll be interesting to see if it does have an impact on the squad as they head into the latter part of the season. In the batting department, the opening combination of Livingstone and Inglis continues to excel. The Thunder dominated the Hurricanes in the powerplay last game so look for the Scorchers to use a similar gameplan. It’s pretty difficult to look past Mitch Marsh after his 93 and 8 sixes against the Heat. Blundstone Arena offers up short boundaries so watch out if Marsh gets his eye in. Bowling wise, they made a good decision to replace Kelly with Paris and the move paid off instantly as Paris picked up 2 wickets. Richardson continues to be a handful for opening batsman as well. Fawad Ahmed will be an interesting proposition considering this venue is unfriendly for bowling points but he can pick up wickets if the Hurricanes need quick runs. Jordan is struggling with his economy rate so will likely be a low owned bowler at this point.

The two sides recently met in Perth when D’Arcy Short scored a ton and the ‘Canes got early wickets in an upset victory. However, the Scorchers will start as slight favourites in the betting after their win over the Heat and the Hurricanes are missing a few of their best players.

Liam hits 18k for the first time this season but he’s well worth it at the moment. In his last 2 innings, he’s totalled 6 sixes and 98 runs, while hitting a nice floor of 42 in his last 4 games. The other nice benefit with Livingstone is the fact the Scorchers are giving him overs without Agar in the lineup. So he’s always a chance of a sneaky wicket and/or economy bonus.

Rinse and repeat with David Miller who is woefully out of form. He’s coming off scores of 3 against the Thunder and 2 points against the Heat. Interestingly, he has scored well at this batter friendly venue in BBL09. However, he needs to start showing some consistency before taking a risk on his form.

Showed signs of life with 43 off 30 against the Thunder. The question is whether he can back it up on Monday night. With 210 runs in his last 10 innings at Blundstone, it’s a good chance and he’s fairly cheap to take a risk on. But it mainly depends on whether the Scorchers get early wickets.

The Big Bison is hitting peak form at the right time with the T20 World Cup this year and the Scorchers skipper will be a popular play on Monday. You really can’t fade him on a batter friendly wicket after scoring a blistering 93 off just 41 balls against the Heat on Saturday. With the Hurricanes missing Meredith/Faulkner, Mitch should really take advantage in the last 10 overs.

Qais Ahmad is a simple fade at the moment but we’re also not liking the form of Chris Jordan. He’s only recorded an economy rate bonus once this season and we doubt it’ll happen at Blundstone. So he’s heavily reliant on wickets, which is always tough in T20. Doesn’t offer much with the bat either for extra points.

If you picked Rose against the Thunder, he probably won you a bit of money. In his 4 overs, he picked up 2 wickets at a very impressive economy rate of 6.75. With the Hurricanes batting lineup struggling for late order hitting, he has been pushed up the order and has batted in their last 3 games. So his ceiling is well worth a play in your lineups.