Remarkably we are up to Game 50 of the BBL09 and we have another action packed weekend of Double Headers. The 1st game on Friday’s schedule sees the desperate Hobart Hurricanes (4-7-1) looking to keep their finals hopes alive as they host the Sydney Thunder (5-6-1) in Hobart.

Hobart has finally received some much rainfall since Thursday morning that extended throughout the day. However this shower activity will clear by game time on Friday evening. With this activity the groundsman may have the Bellerive deck a bit underdone and will bring the bowlers back into this matchup. The Hurricanes have been boosted by the return of D’Arcy Short from ODI duty and James Faulkner who returns after a minor calf strain. Caleb Jewel and Jake Reed have been omitted from the 13. For the Sydney Thunder Chris Tremain returns to the 13 as a replacement for the best outfield catch in the history of cricket in Brendan Doggett.

These two teams met earlier in the tournament at the Sydney Showgrounds with the Thunder chasing down the Hurricanes total of 166 with the loss of 6 wickets in the final over. The scoreboard from either side showed solid performances from both bat and ball but the key to the match was the 96 run opening stand between Usman Khawaja and Alex Hales. This partnership effectively swung the game into the Thunder’s favour. Daniel Sams, Chris Morris and Clive Rose were the only multiple wicket takers with 2 wickets apiece.

It must be said that Mac Wright’s 2nd game of the season was 6 games too late after the failed experiments of the batting order without Matthew Wade or D’Arcy Short. While it should not be an issue, Wright will be squeezed out of opening position and now bat at 3. When you add Miller at 4, McDermott at 5 and Bailey at 6 it looks very good on paper. Add Faulkner at 7 (who must be said does swing like a rusty gate now) and we have a balanced side. Bailey could jump up the order if the Hurricanes lose early powerplay wickets leaving Miller and McDermott for the late overs. With addition of Faulkner this will fix the late over bowling after the potential disaster at Marvel Stadium on Tuesday night. Clive Rose bowling the 19th over is dumb cricket. It must be said bowling at Blundstone is a tough job where fantasy scores are hard to come by. The season only 159 fantasy points on average are earned compared to 221 from the bat. 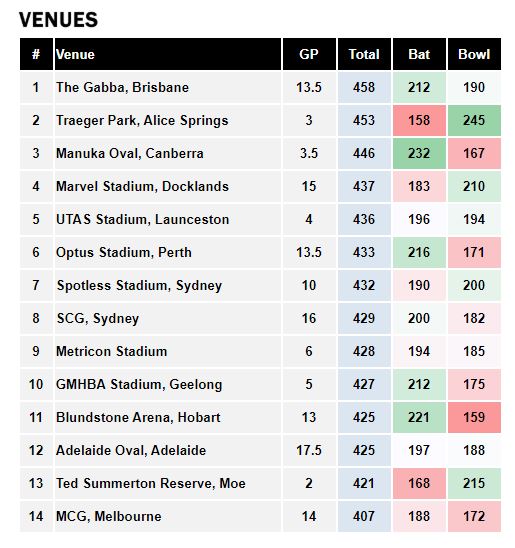 The Thunder’s campaign for the finals has reached the drastic stage as well with coach Shane Bond stating they need to win the next 6 games in a row to win the title. The Thunder apart from Alex Hales were never switched on to the bouncy Perth surface on Monday night. The Scorchers easily chased down the Thunder’s total of 153 with dropped catches the theme of the night. Having Arjun Nair bat at 4 was an interesting decision from the Thunder hierarchy, whilst there was potential at the crease, Nair only scored 11 from 11. Callum Ferguson hasn’t really got going since the 8th of January (35 off 27 against the Stars) yet Alex “The Sweeper” Ross has been really good in the middle order. Ross has scored 32, 10 (rain affected), 94 and 62 fantasy points in his past 4 games. Daniel Sams still leads the tournament with 20 wickets and has a great death bowling partner in Chris Morris. Outside of these two the Thunder are lacking the bowling depth and might get exposed on this small ground.

With the addition of Short and Faulkner the Hurricanes are favourites with the books by only a small margin. For the Hurricanes it is win or go home and whilst the Thunder has a cushion they cannot afford to slip up here.

Exactly what the Hurricanes needed at the top of order was Wright’s innings (70 off 50) against the Renegades. Although D’Arcy Short will return to the top of the order, Wright should bat 3. Thus you can pair Wright if any opener from either side that you want. Wright will be silly owned but there is no getting away at this price.

Starting to look like a below average campaign for Khawaja who hasn’t scored over 40 fantasy points since New Year’s Eve and when he has, it has only been twice. The price has dropped from $18,500 but Khawaja’s form has meant it should be $15,000 before we can consider.

The Hurricanes missed Short and I am sure Short missed the Hurricanes. Does Short come back and resume after his massive 100 in Perth (197 Fantasy Points) or does it take a game to get back into it. We all know how Wade and Short went last year and this is the first time this tournament we get to see these two together.

Was wicketless in the last match against the Renegades which has kept his price at an affordable level for this match. There are not many options in the lower end of the salary scale so Boland will be a popular and safe play.

With the Bellerive pitch under covers all through Thursday we can safely discard the ‘Canes spinner here. His price is too expensive and his fantasy output has only hit 50+ twice this season.

Do we get a bounce back game after the Scorchers easily accounted Sams last game? If the Hurricanes batting order was weaker than named then Sams will be high on the radar. But with power hitters on tap for the Hurricanes it would be interesting to see if Sams can strike.