The Sydney Cricket Ground hosts a massive BBL clash between the Sydney Sixers and Hobart Hurricanes this Thursday night. With the 2nd placed Sixers coming off an embarrassing loss at the MCG, they’ll be keen to get back on track with their first home game at the SCG since the Super Over miracle in December. It’s also a must win game for the 2nd last Hurricanes as they’ve obviously struggled without Short, Meredith and Faulkner.

The SCG has been a fairly poor fantasy points scoring game in the last 15 BBL games played at the venue. Overall, it ranks 12th out of 14 and it’s not overly favourable for either batsman or bowlers. In the 3 games played here this season, the average total innings is 156 and the team batting second has won 2 of 3. The anomaly at the SCG this season was Lynn’s crazy good 94 off 35 against the Sixers in their 209 total batting first. So that’s something to consider as the par score will likely be around 160. In terms of weather, there’s a chance of a thunderstorm and a 90% chance of rain during the game so that will throw a spanner in the works. So it could be a good option to stack opening batsman and bowlers in a potential rain-shortened game. 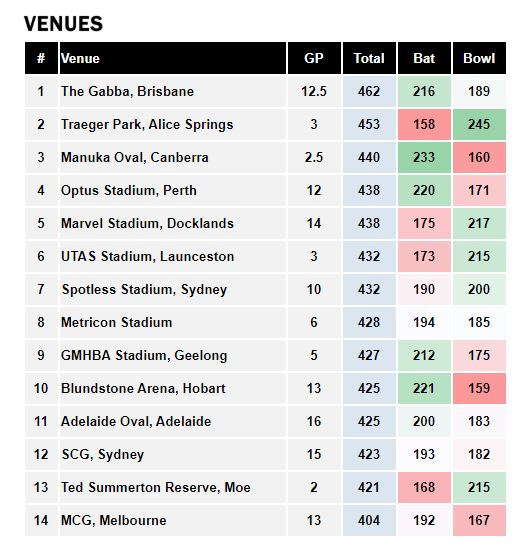 Sydney’s bowling lineup will be very keen to get back on the park this Thursday after Marcus Stoinis tore them apart at the MCG with a huge hundred. Only Tom Curran picked a wicket but between himself and Dwarshuis, they conceded a massive total of 119 runs in 8 overs. The good news is the Hurricanes batting lineup offers a favourable matchup after they were bowled out for 98 last game and don’t have Short atop of the order. The other thing to note about the Sixers bowling is there’s no doubt that missing Josh Hazlewood who caused most of the issues at the MCG, as his economy rate was superb in his 2 games this season. In the batting department, Philippe is coming off back to back low scores but it’s hard to fade him if the Sixers bat second considering he’s scored around 80 not out twice this season. Henriques returned after missing a few games and looked good with 41 off 25. Justin Avendano’s role in the team will be one to watch since he batted 7 last game but can potentially open or move up the order if they need quick runs.

Hobart will be disappointed with their performance against the Scorchers last game after being bowled out for 98 at Blundstone Arena, which is generally a good batting wicket. It’s great to see George Bailey back in form after back to back innings of 36 and 43. Jewell continues to bat well atop of the order as he plays good cricket shots during the powerplay. Matty Wade will be an expensive choice after 2 innings at the crease. But considering the Sixers bowling against Stoinis, Wade could really cash in. David Miller just continues to be a disaster for the Hurricanes and a form slump for a T20 middle order batsman is very hard to get out of. Bowling wise, Clive Rose is probably the best value pick in their lineup after 3 wickets in his last 2 games and has been pushed up the batting order. Scott Boland is hitting a nice floor of 20 in his 4 games thus far. Ahmad has taken a single wicket in 5 straight games but it would be great to see him take a bag full, especially on this SCG wicket. Ellis is always a popular pick with his dual position ability and a huge ceiling of 100+ if he takes a few wickets. But he’s probably struggled a bit lately without Meredith / Faulkner.

We’re predicting a big knock for Wadey in a favourable matchup against the Sixers bowling lineup. We all saw what Stoinis did against them at the MCG and Wade can potentially do the same damage. He has form against the Sixers at the SCG with a 64 off 51 last January. He’ll also probably get lower ownership after scoring just 3 and 26 points in his last 2 outings. So his sheer ceiling should be worth the risk.

Vince is a consistent run scorer but he doesn’t convert starts into big scores and usually hovers around a 120 strike rate. So he’s just too expensive at this point for a guy with a lowish ceiling.

It’s hard to read how the Sixers are going to use Avendano at the moment since he can open the batting or he’ll otherwise bat behind Curran or Silk. But his cheap price tag and dual position is very handy for salary relief. He does have a ceiling of 62 this season but since he doesn’t bowl, you’ll have to wait for the coin toss to see where he bats.

Finally returned from injury against the Stars and while the game didn’t pan out for the Sixers, O’Keefe loves bowling at the SCG. He’s taken 11 BBL wickets in his last 34 overs on this wicket and has an impressive economy rate of 5.85. The other benefit is he’ll likely be low owned after missing games through injury but can potentially take a few wickets and score an economy rate bonus.

Ahmad continues to feature in this section and will so until he picks up 2+ wickets in a game. He’s only hit a ceiling of 44 in his last 8 games and hasn’t reached anything near his 155 ceiling since the first game of the season.

With DS scores of 21,143, 27 and 21 in his last 4 games, Curran is very much a who knows pick at the moment. The major problem is predicting when the Sixers will lose early wickets and that usually means Curran will get batting time. It’s probably hard to see that happening against the Hurricanes here. So it’ll be up to his bowling, where he’s a consistent wicket-taker and should enjoy a favourable matchup against the ‘Canes struggling middle order. So his ceiling and dual position is probably worth the risk but it will mostly depend on the game flow / coin toss.