The BBL09’s first crosstown clash (known as the Sydney Smash) takes place at the Sydney Cricket Ground on Saturday evening. The Sydney Sixers (2-2) host the Sydney Thunder (2-0-1) where both teams want to continue their quest for the finals.

Sydney has been a neutral ground for fantasy scoring so far in BBL09 and if we dig deeper into the BBL08’s statistics the ground seems to give up some average fantasy scores for Bat and Ball. 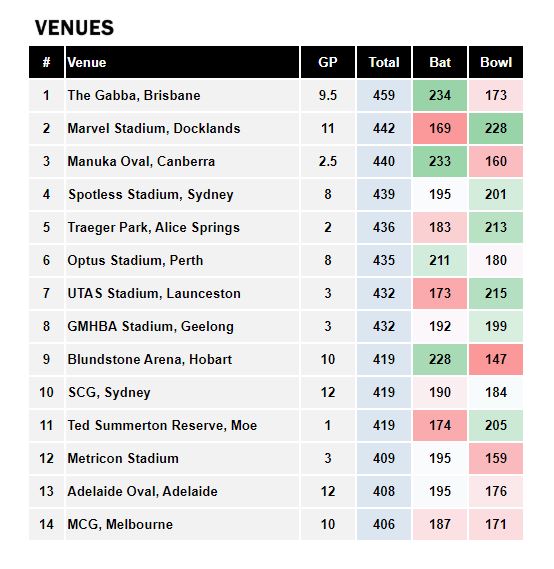 Look even further into the Points Against for both teams this season we find the Thunder towards the bottom of the league for fantasy points against (especially for bowling). Although the Sixers are around the same mark in the giving up points to Batsman.

The Sixers will be buoyed by their big win in Perth on Boxing Day, smashing the Scorchers with Sixers bowlers Jackson Bird, Ben Dwarshuis, Lloyd Pope and leading BBL09 wicket taker Sean Abbott amongst the wickets. The Thunder after their loaded fixture to start the tournament have not featured since the “smoke” game in Canberra last week.

With fantasy salaries on Draftstars more aligned to player performances it will be hard to find value from either side. However you can still build your preferred game scripts from either side. After Josh Philippe’s brillant opening knock, it has been a tough trot for the opening batsman with scores of 22, 15 and 9 but his wicketkeeping keeps him fantasy relevant in each game. So far the top 6 for the Sixers has been hard to trust but we do now have a gauge on each batsman’s role in the team. The top three have the licence to hit where as Moises Henriques and Jordan Silk are there for their to consolidate when early wickets are struck. We may find English all-rounder Tom Curran to be elevated to bat 6 tonight after including the Sixers included Stephen O’Keefe back into the squad.

As mentioned we haven’t seen the Thunder for a week now and with the “smoke” game denying a likely victory it would be interesting to see how the Thunder go on the Sixers deck. The top 3 of Usman Khawaja, Alex Hales and Callum Ferguson have all made runs from their opportunities and whilst the result of the Canberra does not count, the Thunder Bowlers have been sharing the wickets around. The Thunder are deservedly favourites with the bookies for the match and with their mixture of pace and spin options, the SCG should suit their team lineup.

While his 27 runs off 14 balls against the Strikers did not count back in Canberra, his price hasn’t moved from that performance. Apart from a missed opportunity in Game 2, Ferguson is one of the competitions in-form batsman extending back to BBL08. Since his salary is more affordable than his fellow opener’s in Hales and Khawaja I really like him in this match-up against this spin heavy attack.

Don’t Love it - James Vince ($16,800 Draftstars) UPDATE - Vince has an injury and is out for tonight's game

Vince is just $100 cheaper compared to Ferguson and lined up head to head in fantasy, Ferguson cleary has Vince covered in floor and ceiling scoring. Vince has the potential to break the slate with his powerful hitting and strike rate, but we haven’t seen a ceiling score in quite a while and the SCG could be difficult for batters to score heavily.

Can Ross be a poor man’s Jono Wells batting at 5? Whilst his two games so far have produced some relatively sound fantasy scoring, we need Ross to come in early and bat for at least 10 overs to produce a ceiling score. If it is later in the innings then we probably see Daniel Sams jump up the order for that late innings burst.

Abbott has found himself as BBL09’s leading wicket taker through some “quality” bowling and some “questionable batting” against the bowling quick. You only need to look at Ashton Turner’s dismissal on Boxing Day to see that Abbott is getting all the luck at the moment. His death bowling always seems to produce wickets in “junk time” and I am going to continue to ride the Abbott train whilst others despise.

The stats show two wickets with a perfect economy, but what I saw the other night from the Scorchers was some ordinary batting. Pope was bowling his “leggies” with some real heat in Perth which frustrated the Scorchers batsman into defence then into rash shots. The Thunder coaching staff will point this out and will have plans to combat. Let the field take the cheap price and hopefully he goes for runs.

With the Thunder likely to keep 3 spinning options in Nair, Green and Cook, Sams will find himself as the fast bowling spearhead along with Morris. The Sixers will probably look to attack the fast bowlers from the Thunder and I am not sure Sams will be able to contain the fire power from the Sixers. However his ability with the bat to score runs quickly makes him a hard player to leave out or to include.