The second match in Wednesday’s double header comes to you from the MCG with the red hot Melbourne Stars hosting a plucky Sydney Thunder outfit. The Stars currently sit top of the table with a 5-1 record, while the Thunder are clinging to 4th spot with 3 wins, 3 losses and a No Result from their 7 matches.

The Stars have made two changes to their 13 man squad. Wicket taking sensation Haris Rauf returns to replace the departing Dale Styen, while Hilton Cartwright is back in place of Merlo. Expect Rauf to come straight back into the side but it would be a surprise to see Cartwright force his way into the XI. On Saturday night the Stars were too strong for their cross town rivals the Renegades with an 8 wicket win at this ground, chasing down 142 on the back of an unbeaten 68 from Marcus Stoinis.

For the Thunder, Jono Cook and Nathan McAndrew return to the 13 which will place pressure on the remaining 11 after their rain affected loss to the Heat on Monday night. Both players have been useful through the tournament so the likes of Brendan Doggett and Arjun Nair may struggle to keep their spots.

These two teams played at Spotless Stadium just last Thursday, where the Stars snuck home by 3 wickets with 2 balls to spare despite needing only 24 runs off the last 4 overs with 9 wickets in hand. After 2 early wickets to Glenn Maxwell opening the bowling, it was up to a rear guard fightback from Matt Gilkes and Alex Ross to get to 142, with Haris Rauf picking up 3 wickets through the middle order. 58 from Stoinis and 65 from Nick Larkin had the Stars well on target but 3 wickets to Daniel Sams and 2 to Chris Morris and Nathan McAndrew almost saw the Thunder snatch victory from the jaws of defeat.

The Stars win against the Renegades was the first game played at the MCG this season but it went to the same script as many of the games at this ground over the past few seasons. It is clearly the lowest fantasy scoring ground in the country and teams batting second have a great record. Both teams are also stingy at allowing fantasy points, with the Thunder 6th and Stars 8th in the competition for points against. 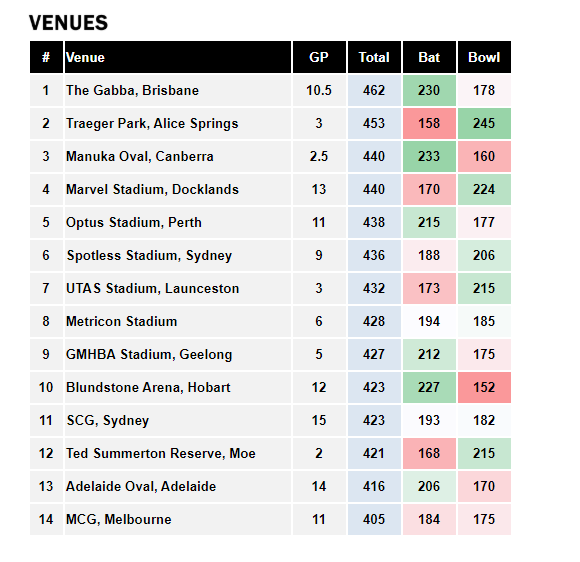 Stoinis may be expensive given he is playing purely as a batsman but he has continued his unbelievable form from last season and continues to spend plenty of time in the middle. His 68* off 55 here last game was full of quality and he knocked up 58 against the Thunder previously. His consistency is what you look for when you pay up for a batsman and he is a guy you can build your lineup around.

Dunk has been bouncing around the order a bit but didn’t capitalise with a chance at number 3 last game. He hasn’t got past 19 in five hits this year and could easily be demoted to number 6 again depending how the innings plays out. He is cheap for a reason.

Maxwell is priced up and his role isn’t as well defined as you would ideally like at this salary. While he took 2 vital wickets against the Thunder at Spotless Stadium, he only bowled 1 over last game at the MCG and is averaging less than 2 overs a game. He is pretty well settled in at 4/5 in the batting order but given the form of Stoinis batting deep into the innings, his opportunity for runs can be reduced, especially on a lower scoring ground. We all know Maxwell’s ability and upside but he is a risky play at this price.

How could you not love Haris Rauf? He returns thanks to a convenient injury to replacement import Pat Brown and can look to build on his 10 wickets from 3 games so far. Add the fact that he has earned an economy bonus in all three matches and he brings everything to the table.

Tremain has only taken 2 wickets this season and hasn’t earned an economy bonus since the first game. He came to the Thunder after a pretty decent year with the Renegades but has been disappointing for his new team and comes up against a very settled batting lineup. At this salary there are plenty of better options.

Sams had a lean start to the year but his hitting his straps now with 7 wickets in his last 3 games. He took 3/25 against the Stars last time – albeit when the game was nearly over – but isn’t delivering with the bat like he has shown in the past. Despite this, he still gets opportunity batting anywhere between 5 and 7 and is a boundary hitter so he has a number of ways to return you a big fantasy score.