The top two teams in the BBL09 face off in the second final of the postseason dubbed the “Qualifier”. The Melbourne Stars host the Sydney Sixers at the MCG with the winner advancing to the Grand Final on Saturday week. This match gets underway at 7.15pm AEDT. This is Game 58 of the tournament.

All season long we have provided our famous FREE Cheat Sheets and Data Tools in our Data Tools section, new for the BBL09 season, Daily Fantasy Rankings presents the Draftstars Lineup Builder! Using our Data Tools and Projections you will be able to quickly build and import BBL teams into Draftstars by using the CSV upload. Access the Builder including tutorials on how the builder works by clicking the banner below.

Melbourne will face an oppressive day on Friday with temperatures forecasted to hit 40+ degrees. Whilst there is a small chance of a thunderstorm in the late afternoon, it should not affect this match with little rain forecasted. With hot weather the day before, expect a hard and dry surface for the players on Friday evening.

The Melbourne Stars were forced into 1 change for the match with Sandeep Lamichhane being called up for Nepalese national duty. In his place returns Pakistan fast bowling surprise packet in Haris Rauf. Rauf recently took figures of 1/32 and 1/27 (the third match was washed out) for the Pakistan national team against Bangladesh. The Stars are still missing Hilton Cartwright who is out with a broken hand.

The Sydney Sixers do welcome back Sean Abbott to the squad and he should come straight back into the team for Tom Curran, who is on international duty with the English squad in South Africa. Abbott has been out with a quad injury but has made his return a timely one.

These two teams have won a game off each other throughout the BBL09 season, the Stars won the 1st game on the back of Marcus Stoinis’ 147 off 79 balls in Melbourne. The 2nd match was rain affected (as it seems in Sydney these days) with the Sixers winning via the DLS. Moises Henriques that night whopped 72 off 31 balls in that match. 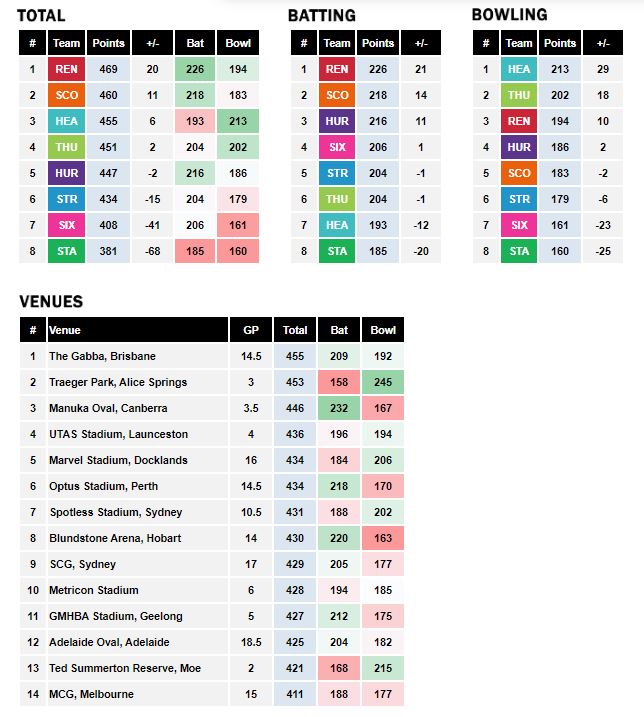 The MCG (if we took the match between these two teams back in Game 34 outas an outlier) is the worst ground for fantasy scoring with both the bat and ball struggling. When you marry these two teams fantasy scoring against and we have a recipe for a low scoring fantasy game. With big boundaries on either square of the wicket, the ground is tough to obtain high strike rates from the batsman.

The books have this contest as a coin flip which is surprising if we were pricing this when the Stars locked in the home final. The Sixers have some real international experience in their side both with bat and ball, whilst the Stars have been defending their “reliant” approach with star duo in Stoinis and Glenn Maxwell. Of a statistical note, the Stars have won the past 6 out of the 7 games at the MCG.

Smith was in the ‘Love It’ section last match against the Renegades and rewarded owners with a huge fantasy score of 111. The price has remained rock solid so we can still get to Smith here. This Stars bowling attack outside of Zampa and Rauf is mediocre at best with an out of form Coulter-Nile and the unknown in Hussain within this bowling attack. Smith should (if he does get an opportunity) bat for an extended period to accumulate then attack at the death.

Silk hasn’t really had much of a go this season with the strength in the top order bearing fruit at this stage of the season. He hasn’t actually had a proper bat since the fixture at the MCG where we scored 32 off 31 (3 weeks ago). I can’t see the Stars ripping through the Sixers top order in 6-8 overs to expose Silk at 6. Easy pass for me.

Has the oil rig run out of fuel? Scoring 8, 5, and 23 fantasy points in his last three matches suggests that a big innings is not a certainty. Reports from the Stars camp indicate that Stoinis is likely to roll the arm over which increases his chances of fantasy output. How he handles both the bat and ball is a “who knows” job here.

Zampa’s home turf is clearly the most fantasy friendly of grounds for Zampa in this year's tournament. 87, 68 and 94 fantasy points are his returns in the three games this season. Whilst this Sixers batting top and middle order are class, Zampa should be able to at least restrict run scoring. The safest bowler in the Stars lineup with serious ceiling potential.

1st match for the unknown pace bowler was one to forget. 1 for 56 off his 4 overs wasn’t an ideal start and his price on Draftstars has crashed as a result. At this price it will make picking, Smith, Maxwell or Stoinis a much easier task but I am more inclined that Hussain is likely to score next to nothing fantasy wise.

The player who should of been picked but faded everytime is back after injury. Abbott started the season with a bang scoring 108, 85, 70 and 72 fantasy points before injury struck down a month ago. How does he go at the MCG after a month off? Who knows but without Curran bowling the late overs and Dwarshuis a bit inconsistent lately, Abbott will take the responsibility of the death straight up.