Monday night features a massive game between the 3-2 Sydney Thunder and 2-3 Brisbane Heat from Sydney Showground Stadium. The Thunder caused a massive upset in the opening game of BBL09 at the Gabba against Brisbane. However, the Heat are starting to “heat up” with 2 wins in their last 3 and the knowledge that AB De Villiers is coming soon.

The first BBL game of the season at this venue saw a close finish between the Thunder and Stars as both sides struggled with a tricky batting deck. The Thunder reached 142 in their first innings and while Stoinis/Larkin put on a 123 run stand, the Stars almost collapsed in the last few overs but got home by 3 wickets in the end. In the last 9 games at the venue, it ranks right in the middle for batsman with 188 total points. In contrast, it has been bowler friendly as the 5th best venue for bowling fantasy points. Interestingly, most of the batsman on Thursday found it difficult to play pace bowlers rather than spinners which says the pitch is holding up and that makes timing the ball much harder. So it could be a good strategy to stack pace bowlers from either side, such as Morris, Sams and Laughlin. 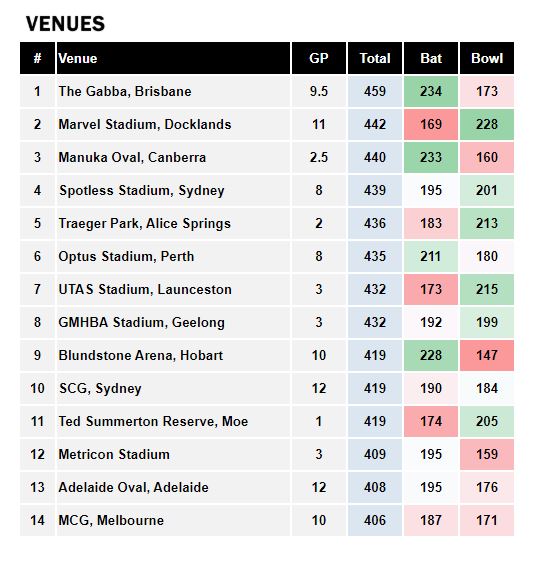 The Thunder sit in a good position after 3 wins in their 6 games (1 no-result) but they’ll be disappointed in their batting performance against the Stars last Thursday. Hales and Khawaja were both dismissed by Maxwell in the first few overs and that put immediate pressure on the middle order. Luckily, Ferguson continued his stellar season with 19 and Gilkes found form with the bat after a solid 28. Alex Ross is a really underrated t20 batsman with his excellent sweep shot and could be a good low ownership batsman pick in this matchup. The interesting part about the Thunder is how many all-rounder options they possess. You have Morris, Sams, Nair and Green all to choose from, so it can be tough to predict which one’s going to pick up wickets or bat at the death. However,Nair didn’t bowl his 4 allotted overs against the Stars and Green has fallen away since the addition of Morris. Sams is coming off a huge 131 DS points and Morris is a good bowling option as he usually finishes off the innings for the Thunder, which can mean cheap wickets. His batting on the other hand has been pretty average.

Brisbane returned to form with an important win over the Hurricanes in Hobart as they totalled the 3rd highest BBL score in the massive 212/3 total. It sounds obvious but when Chris Lynn gets going, the Heat are always going too be hard to beat. He’s scored 88 not out and 94 in their last 2 wins as the Heat as a team have scored 200+. They probably won’t reach those heights on Monday night but there’s always a chance when Lynn is going berserk. It was also good to see Max Bryant finally get a score as he batted brilliantly for 65 off 36. But they do need more from Tom Banton at the top of the order after back to back low scores. Matt Renshaw is another interesting mid-priced bat that does finish off the innings well, but it usually depends if Lynn has done the damage at the other end. In the bowling department, they have a decent enough pace attack to worry the Thunder if the wicket is similar to last Thursday. In fact, all 7 bowlers took a wicket in their win over the Hurricanes on Friday night. We’re still a fan of Khan on this wicket, especially if Lynn chooses to bowl him against Hales or Khawaja in the powerplay.

Renshaw is having a good season with the bat in the Heat middle order and the added bonus of him bowling a few overs makes him an attractive play in DFS. He’s actually taken 3 wickets in his last 6 overs and that fact that Maxwell removed both Thunder openers last game bodes well for a few Renshaw tweakers. With the bat, he’s coming off 30, 1, 60 not out, 39 and 26 as well. He usually bats well with Lynn at the other end so there’s every chance the pair can bat together on Monday.

Hales is out of form and will be a fade for mine at his expensive price tag. He’s been bowled in back to back innings and the Maxwell dismissal was pretty poor on this pitch. The Heat should look to bowl Renshaw or Khan early on to unsettle him as well.

Since returning from illness, Banton hasn’t looked himself after two short stays at the crease. He’s coming off 8 runs against the Hurricanes when the Heat made 212/3. Previously, he was out early against the Scorchers on the Gold Coast. But as he showed against the Stars earlier in the season with 64 off just 36 balls, he can turn it on if he gets past the opening bowlers.

After figures of 3 for 25 against the Stars, Sams has now taken 12 wickets on the season which sees him take the top position in BBL09. Interestingly, he’s also the only bowler with a maiden this season (he has bowled 2), which is almost worth the same price as a wicket. His batting hasn’t offered much this season but he’s coming off a handy 13 off 16. So he’s going to be picked mainly for his bowling form but with the added bonus of a few runs if the Thunder lose quick wickets helps.

The addition of Morris has really hurt Green’s DFS scoring ability as he now bats at 8 and he only bowled 2 overs on Thursday. We mentioned that pace bowlers will likely enjoy this bowling on this pitch so that’s not a good sign for Green. So he’s just too expensive when you can safely pick Sams or Morris in terms of dual position bowlers.

The Afghani spinner has bowled without luck in terms of wickets this season after just 5 scalps in his 20 overs. But he does hold the 4th best economy rate in the league for bowlers with 10+ overs and he’s also the best ranked economy spinner. The fact that the Thunder lost 3 of 7 wickets to spin last Thursday is a good sign for Khan to hit value with a few wickets and economy bonus.